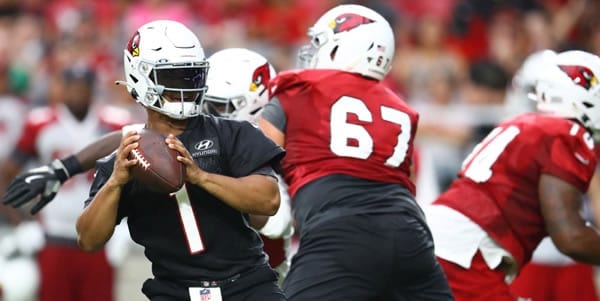 The Detroit Lions come into Glendale on Sunday for a week one NFC matchup with the Arizona Cardinals. The Lions only won 6 games last season, twice as many as the 3-13 Cardinals. But both teams have increased hope this season. The Cardinals have a new head coach in Kliff Kingsbury, along with top pick Kyler Murray at quarterback. A new approach offers hope of new promise, and we’ll see how they look in their first act. They get this one at home against what would appear to be a negotiable foe in the Lions, coming off a rough season. They showed some promise under first-year head coach Matt Patricia last season, while also being one of the more inconsistent squads in the whole league. Who can turn the page on a difficult season and get this pointed in the right direction?

Changes that Could Impact this Game

The Cardinals brandish a new look and system this season. On the one hand, a radical change to a 3-13 team isn’t a bad idea. On the other hand, going 35-40 as a college coach wouldn’t appear to bode well for the prospects of turning this thing around for Kingsbury. Still, he’s done well with the quarterbacks he has worked with, and it’ll be interesting to see how Kyler Murray looks in this offense. Does he have enough weapons and will they deliver? Will the new system see a rebirth in David Johnson? Does Larry Fitzgerald still have enough in the tank to be a number-one receiver? Will young targets like Christian Kirk step up? Will Michael Crabtree be born again in this offense? Can they find another diamond in the rough?

Making it harder for the Cardinals for the purposes of this game is what appears to be an improved Detroit defense. After allowing an average of 18 points per game over the second half of last season, they added DE Trey Flowers and some youth to go along with it. Adding Mike Daniels to the line should help. It’s not hard to picture this line having their way with a Cardinals’ offensive line, though the quicker tempo will help camouflage the deficiencies of the Arizona front to some extent.

How Detroit’s Strengths Play Against the Cardinals

The Cardinals start the season with some issues on defense, especially with corners Robert Alford and Patrick Peterson not available in week one. Stafford is looking for a big season, and his receiver package of Marvin Jones, Kenny Golladay, and Danny Amendola might not be great, but they can do damage. Add in a revamped tight end package with highly-respected rookie TJ Hockenson and Jesse James, and they will throw a lot at the Detroit defense. We saw a lot of promise last season with RB Kerryon Johnson, and he should feast on a weak Arizona front-seven, as will newly-added CJ Anderson. Also, look for Detroit to control the line-of-scrimmage on the other side of the ball, with their defensive front being the strength of their defense.

More Picks: Jay’s Rams vs. Panthers Pick Against the Spread>>>

The Detroit secondary is revamped, and it’s hard to tell what it will look like. For a team looking to air it out a lot and move quickly, Murray will have a chance to get off to a fast start. I look for him to reintroduce Johnson as one of the best pass-catching backs in the league. Their receiver crew lacks star-power but has a certain depth with a lot of differently-skilled guys. This is a potentially-comfortable entrance-exam for this offense to hit the ground running a bit. And with some departures and reshuffling with a Detroit offensive line, maybe the pass-rush of Chandler Jones and newly-added Terrell Suggs can pay off. A lot of people think the Kingsbury approach is not as innovative as some are making it out to be. But I guess a drastically-different approach makes Arizona at least an interesting X-factor heading into ’19 and for the purposes of this game, as well.

Maybe Murray becomes the savior of the franchise. He will be comfortable in Kingsbury’s offense. Perhaps he hits the ground running. Maybe the offensive line looks less of a liability with the time they need to defend decreased by the speed of the plays. Perhaps the added aerial flair gives Johnson more room to reclaim his form of a few seasons ago. And then the offense can possibly provide a deficient defense enough room with which to work, where the additions they made can register well. But the flip side of that coin isn’t pretty. The offense could fall flat. In this game, a secondary missing manpower could get lit up.

Find: The best sportsbooks and the top bonuses!

A Case for Detroit

Is this a good matchup for them? The defensive front should thrive against the Arizona O-line, and the offense could also show its teeth in this spot. It’s not clear how Arizona’s run-defense will improve dramatically, giving Detroit a chance to flex a 1-2 punch at RB. The Arizona secondary has some players but can’t afford to be missing two key guys, and the Detroit offense won’t be facing one of its sterner tests of the preseason. And sure, the Arizona offense and how good they will be remains a mystery, but there was a lot to like with how Detroit finished the season last year on that side of the ball.

It almost seems counterintuitive to take Detroit as a favorite on the road. I see some matchup components shaking out their way in this matchup. Granted, Arizona is a bit of an X-factor. They could come out and see some of their best-case scenarios actually manifest. I’m just not so sure it will. And their issues on defense and how they’re not at full-strength to start the season might resonate beyond what they are expecting. I see Detroit having success on the ground and through the air while disrupting the line-of-scrimmage enough on defense to at least eke out a FG win here on the road in week one.

Loot’s Pick to Cover the Point Spread: I’m betting on the Detroit Lions minus 2.5 points.