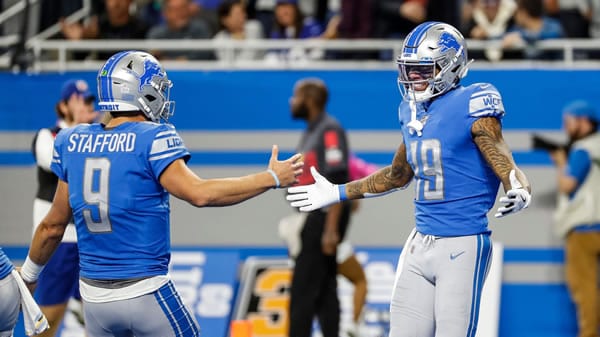 The Detroit Lions take on the Atlanta Falcons on Sunday in what should be an entertaining NFC matchup. For a pair of teams that are combined 3-8, they were both pretty good last week, something we might not often say this season. But in this case, it wasn’t even close, with Detroit beating Jacksonville on the road, 34-16, while Atlanta also thrived on the road, beating the Vikings, 40-23. They were among the easiest covers of the week. Detroit looked lively coming off the bye week, while the Falcons just completely took over as road underdogs, jumping out to a 23-0 lead. Who can keep it going this week?

What Last Week Told Us

Detroit is doing better. The first few weeks seemed like more of the same. But with a road win over Arizona, followed by a close loss to the Saints, and then the romp over Jacksonville shows the Lions showing life. Last week, we were reminded of an offense that has a lot of dimensions. That O-line is coming around a little too. Stafford wasn’t electric aerially last week, though Kenny Golladay was over 100 yards. But they can unleash their menace in the passing game in this spot to more effect, as Stafford spreads it around a little better. But on Sunday, we started to see some of what the Detroit brass was envisioning when bolstering up the running back corps. With D’Andre Swift running for 116 yards and two TDs, he announced his presence in a big way on Sunday. Adrian Peterson had a TD run, and with Kerryon Johnson still in there, it’s a group that can do damage. Against Atlanta’s beleaguered secondary, though, look for Stafford to get things going through the air more this week.

Granted, Atlanta has struck a pitiful image through five weeks, blowing big leads time and again, with mental lapses, and just a very negative overall vibe. On Sunday, we were reminded of the side of the Falcons that let them get out to all those leads, just with some actual follow-through this time. They never relinquished control, and as Minnesota started making a move, they managed to keep tacking on scores to keep them at a distance. Matt Ryan was superb, as he connected all day with Julio Jones and his ample cast of weapons like Calvin Ridley, Hayden Hurst, and Russell Gage, all of whom were productive on the day. Against the dicey Detroit run-defense, one can expect a healthier dose of Todd Gurley this week.

BIGGEST BONUS EVER FROM A LEGIT BOOK: DEPOSIT $100 TO $1000 AND GET A DOLLAR FOR DOLLAR MATCHING 100% REAL CASH BONUS AT BETNOW!

Critical in the Falcons’ surge last week was a defense that hadn’t seen a lot go right to start the season. It wasn’t just a matter of being porous. It was how they couldn’t come up with a clutch play to save their lives and how little positive energy was visible on that side of the ball when things started going bad. Who knows, maybe there was a chasm there with Quinn, and since he’s out, we’re just seeing better results under interim coach Raheem Morris. Not that one win, particularly against a derailed Minnesota team, changes all that, but we saw a defense with energy and pride, taking delight in actually contributing something good to the cause for a change. We saw Atlanta hold Minnesota scoreless in the first half, make three picks, and just looking pretty decent actually. They could be tested to a greater extent this week.

Time to Look at Detroit Differently?

After Detroit fell to 0-2 on the heels of two ugly losses where they were giving up big leads, head coach Matt Patricia was squarely on the hot-seat. It was their 11th loss in a row dating back to last season. But for the last month, including a bye, we’ve seen a team that isn’t living up to the billing of a doormat. Beating the Cardinals and Jags on the road puts them in good stead in this one. It’s a rough way to start the season with four road games in your first six games, but they’ve been doing nicely away from home. They could get back to .500 this week, and when a long-suffering team starts to find some momentum, they can be tough in these types of games.

The Falcons Can Still Fly

With the string of losses, the dramatic comebacks going against them, and the widespread team-collapses, it was hard to see the rosy angle with Atlanta. But again, they were at least good enough to take big leads in some of their games. In order to collapse, you have to inflate at some point. And maybe some of us, particularly those who are on the wrong side of bets as Atlanta blew game after game, obsessed more with the collapse and not enough on what preceded it.

The Detroit pass-defense has been decent this season and is getting a little better, even with a few pieces missing. But they will still be facing a stocked and potent Atlanta aerial-offense. In terms of total yards, the Atlanta offense is still near the top, even with the 1-5 mark. Matt Ryan is already near 2000 yards with 11 TDs, and they’re never hopeless with all that weaponry. If Gurley is able to get things rolling against this leaky Detroit front, it could open up things for a variety of ball-catchers that could have the Detroit defense dizzy.

Last week was a bit scary for potential Detroit backers, as Atlanta looked like a different team in many respects. I just think that when you look at two teams trying to step out of the ashes, one game alone doesn’t signal a turnaround. That’s especially the case when that opponent is a team that is as all-over-the-place as the Vikings. With Detroit having shown better form in their last several games, I just think they’re more bankable in the sense of not reverting to prior form. I’m taking the Lions in this one.

Loot’s Prediction to Cover the Point Spread: I’m betting on the Detroit Lions plus 3 points. 5Dimes has left the offshore sportsbook market leaving many bitter about losing their beloved reduced juice -105 odds. Most aren’t aware that they can still find -105 odds out there at a good sportsbook —> BetAnySports