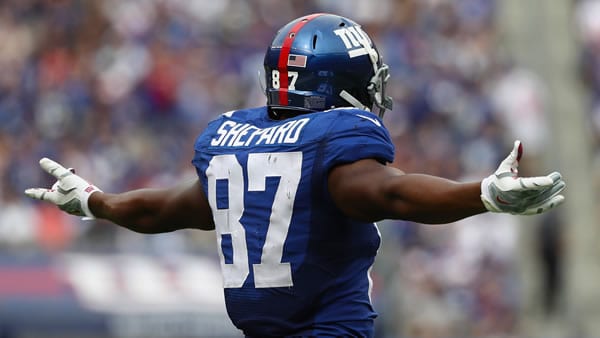 The New York Giants may be four games under .500 on the season, but thanks to recent back-to-back victories they’re still in the hunt for the division title. The Cincinnati Bengals, meanwhile, are probably still in shock after losing their promising young quarterback last week to a terrible injury. That’s the situation heading into this inter-conference match-up slated for Sunday afternoon in Cincinnati. The Giants haven’t been favored too often over the last couple of seasons, but they’re giving points here. How are we playing this game with our free NFL pick?

Week 12 NFL betting odds opened the Giants at around -4 over the Bengals, with an over/under of 43. Early betting action then goosed New York to -5.5.

New York carries with it a two-game winning “streak,” after beating Philadelphia two weeks ago, 27-17. The Giants then enjoyed last week off. The G-Men, playing as five-point underdogs against the Eagles, drove the opening possession of the game 85 yards to a touchdown and led 14-3 at the half. New York allowed Philadelphia to get within 14-11 early in the third quarter and 21-17 later but tacked on the last six points of the game to preserve the victory.

The Giants out-gained the Eagles 382-346, held Philly to 0/9 on 3rd-down conversions, and for the second straight game did not commit a turnover.

New York has now out-gained two of its last three opponents and out-rushed four of its last five foes.

At 3-7 overall, the Giants, unbelievably, trail first-place Philadelphia by just a half-game in the pathetic NFC East.

Get all of our team's game predictions in one spot >>> NFL Football Picks!

Meanwhile, Cincinnati is coming off a devastating 20-9 loss to Washington last week, but it wasn’t really the game that mattered. It was the loss of QB Joe Burrow for the rest of this season to a knee injury. Burrow was giving the Bengals hope for the future and keeping them in games; from Week 2 through Week 8, Cincinnati played 6-1 ATS, winning twice outright, covering four times as underdogs.

Now the Bengals will play out the string on this season with second-year pro Ryan Finley, he of a career 2/3 touchdowns/interceptions ratio, behind center.

Cincinnati has out-gained just two of its ten opponents this season.

At 2-7-1 overall, the Bengals are just trying to make some progress toward a brighter future.

These teams last met four seasons ago, a 21-20 New York victory. Eli Manning quarterbacked the Giants that day against Andy Dalton for Cincinnati.

New York is actually playing good ball as of late, in fact maybe the best ball in its division. It’s amazing what can happen when a team stops giving the ball away. The Giants are also out-rushing opponents on a regular basis, and by our accounting teams in the NFL that win the ground battles cover the spread about 65 percent of the time. On the other hand, Cincinnati is missing several key people on offense, and the defense ranks 26th in the League overall and 29th against the run. These two teams were actually pretty similar heading into this season, but they’re heading in different directions at the moment. We’re giving the points here with New York.