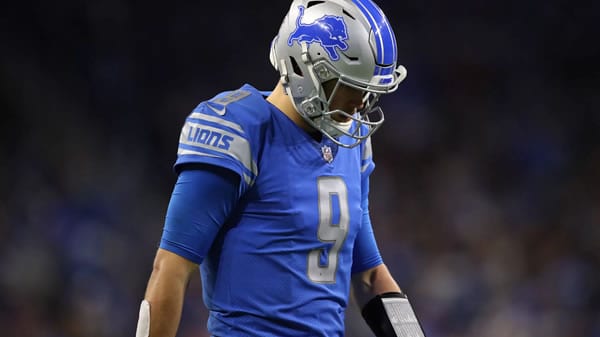 The Houston Texans take on the Detroit Lions on Thanksgiving at Ford Field. This week 12 matchup might not feature the hottest teams in the league, but it is a competitive game and an interesting one from a betting perspective where a lot of different angles can be justified. Last week was a rare positive development for a Texans team that has fallen well short of expectations after making it to the playoffs last season. A 27-20 win over the Patriots gave them their third win of the season and some momentum entering this game. Meanwhile, Detroit is 4-6 but sank to new lows on Sunday, getting shut out against Carolina, 20-0. Can they get it together on the short week and hold down the fort, or will the Texans get another win on Thanksgiving?

The Difficulty with Detroit in This Spot

One would have figured with Matthew Stafford bouncing back from being hurt and being in there for the Lions would pay off against a Carolina team starting PJ Walker at QB. But what has been a mediocre Panthers’ defense completely shut down this offense in an embarrassing display for Detroit. The previous week, they had gotten to 4-5 with a win over Washington. At times this season, they’ve shown signs of life, winning three of four at one point, but other than the win over Washington a few weeks ago, it’s been slim pickings as of late.

Despite players on both sides of the ball who can be productive, the total of this Detroit team can be alarmingly-low. Matt Patricia’s handiwork on defense hasn’t really paid off in his third season—a disconcerting event in light of some of the good personnel they have. Stafford has sometimes shown what this offense can do at their best with an amply-stocked backfield and a battery of capable receivers. But what good is it if, at any given time, the offense can just come screeching to a halt? Where are they mentally after such an ugly loss, now having to play on the short week on Thanksgiving in this climate? Can one reasonably forecast a Lions’ team that will be in a state of high morale?

Signs of Life From Houston?

A slew of losses, injuries, and a midseason coaching firing attests to what has been a rough season for the Texans. But not a lot of people have been paying attention to a barely-decipherable upsurge resulting in a 3-3 mark after that crushing 0-4 start to the season. Granted, that includes two wins over the Jags and one against a Pats team that has been so-so at best. But in competitive games against Tennessee and the Browns, we’re seeing the Texans play better defense along with better performances from Deshaun Watson and this Houston offense.

The Texans still struggle on offense now with Hopkins gone and their run-game not usually in good form. David Johnson is hurt and hasn’t worked out much anyway. Finding a credible every-down back has been elusive for the Texans. But some credit still needs to be extended to an offensive line that has at least been allowing Watson to find the open man. His 28-for-37 showing on Sunday with 344 yards and a couple of TDs saw the Texans’ signal-caller with ample time to make decisions. With Will Fuller and Brandon Cooks, good tight end play from Jordan Akins and Darren Fells, along with aid from role guys like Randall Cobb (out), Keke Coutee, and versatile back Duke Johnson, there are still weapons with which to work. Still, it’s a one-dimensional offense that doesn’t always fire. In their last road-appearance, they managed a mere 7 points at Cleveland, so buyer beware.

What could really lend some credibility to the Texans’ efforts is a defense that is maybe starting to benefit from the vision of longtime NFL defensive coordinator and current interim coach Romeo Crennel. They still have some heat upfront that could prey on a wavering Detroit offensive line, with guys like JJ Watt, Whitney Mercillus, Zach Cunningham, and others playing well. A Houston defense that was imminently-exploitable on the ground up until a few short weeks ago has been showing more resistance in that area in recent weeks, even against some good running offenses. Their secondary package has also been showing its fangs in recent weeks.

As this analysis moves forward, predictably in favor of Houston after Detroit got shut out by a team that had lost five straight games, perhaps we should take pause. While the same applies to Detroit, it’s tricky coming off the short week and playing on Thanksgiving, something Detroit is more-accustomed to. It’s never a cinch when you’re playing outside your conference on the road. This is a road Houston offense that hasn’t always delivered or kept pace with opponents in games. With this being their third road game in 18 days, there is some cause to be less than completely sold on the idea of the Texans this week.

This isn’t an easy spot for a 3-7 Houston team that would probably rather be anywhere besides Detroit on Thanksgiving. They’re entirely not bankable in many contexts, never mind a Thanksgiving road game. But against a Detroit team that looked as bad as they have in years last week, this is actually a spot where they could potentially shine. I see the Houston aerial offense getting to work on a substandard Detroit secondary, with Watson hitting his different targets with enough regularity to get the Texans to the cover on Thanksgiving.

Loot’s Prediction to Cover the Point Spread: I’m betting on the Houston Texans minus 2.5 points. Bet your Thanksgiving games FREE by taking advantage of a 100% REAL CASH bonus offer on your first deposit of $100 to $300 when you use bonus code PREDICT100 at MyBookie Sportsbook!