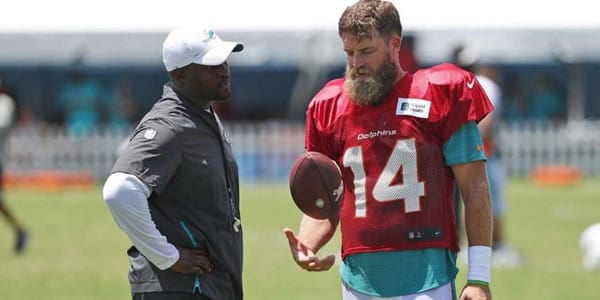 It’s the renewal, of sorts, of a Sunshine State rivalry when the Dolphins host the Jaguars for a Week 3 NFL exhibition season bout Thursday night in South Florida. The Jags, as usual, are tough on defense but struggling on offense, and haven’t even played their new starting quarterback yet. The Dolphins, meanwhile, will also have a new QB, although they’re not exactly sure who that will be. How are we playing this game for our free NFL pick?

Week 3’s NFL exhibition betting odds opened Miami at around -2.5 over Jacksonville, with an over/under of 35. Early betting action then bumped the Dolphins to -3 and the total to 37.

Jacksonville opened its 2019 exhibition season with a 29-0 dud of a loss at Baltimore, then Thursday fell at home to Philadelphia 24-10. The Jaguars produced just 112 yards of total offense in the defeat to the Ravens, then managed 250 yards in the loss to the Eagles.

Incoming starting quarterback Nick Foles has not played this pre-season yet. In his place rookie, Gardner Minshew has taken most of the snaps, going 26/43 passing for 248 yards, with zero touchdowns or interceptions.

As of this writing, it’s uncertain whether Foles will play at all Thursday night, in part because the Jags offensive line is a bit of a mess right now.

Find: The top sportsbooks sorted by category or the best bonuses

Miami, meanwhile, opened its exhibition season with a 34-27 win over Atlanta, then lost last Friday at Tampa Bay 16-14. The Dolphins beat the Falcons with a Myles Gaskin touchdown with just under two minutes to go, then lost to the Buccaneers on a field goal with six seconds left.

Incoming quarterback Josh Rosen has taken the majority of the snaps so far for Miami, hitting on 23/38 throws for 293 yards and one interception. Back-up Jake Rudock is 12/19 for 137 yards and two touchdowns, with one pick, while probable regular-season starter Ryan Fitzpatrick has played sparingly, throwing just 14 passes.

It looks like Fitzpatrick will start Thursday night, and you’d figure he’d play the first half. But that doesn’t mean the Dolphins are going to score a bunch of points.

These teams just met back in Week 16 of last season, a boring 17-7 Jaguars victory. With Ryan Tannehill quarterbacking the Dolphins and Cody Kessler behind center for Jacksonville the teams combined to produce just 420 yards of total offense and two offensive touchdowns.

Miami’s win over Atlanta two weeks ago played way over a total of 35 while the loss to Tampa Bay played under a total of 42.

Unders are 17-15 so far this exhibition season.

Neither of these teams, regardless of who plays quarterback, is going to be an offensive powerhouse this season. The one thing Jacksonville has going for it is that defense. Also, these teams combined for just 24 points when they met last December. We don’t know who’s going to win this game, but we do expect points to be hard to come by again. We’re backing the under for our free NFL pick here.

For more analysis with predictions against the spread all season long check out our NFL pick section.