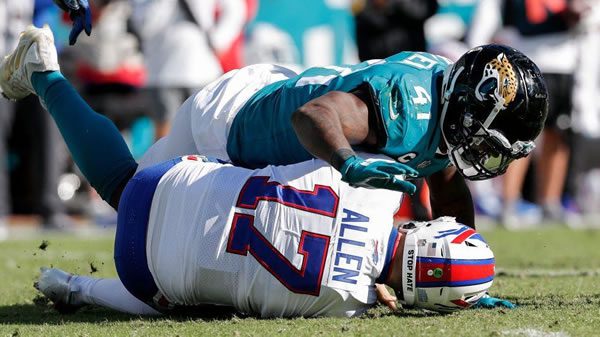 Point Spread: JAC +10.5/IND -10.5 (Betanysports.eu - They allow you to bet on games at -105 odds instead of the spendier -110 option your overpriced bookie is socking you with! Make the switch! You’ll be SO glad you did!)

The Jacksonville Jaguars come to Lucas Oil Stadium to take on the Indianapolis Colts on Sunday in AFC South action. It isn’t often this season when both teams are coming off wins, but such is the case this week. The Jags are coming off their second win of the season, scoring an upset 9-6 win over the Buffalo Bills on Sunday. They look to keep it going against the Colts this week. On Thursday, the Colts beat up on the Jets. 45-30, notching their third win on four games. They look to push it to .500 this week at home. Who can get it done in Indy on Sunday?

Jaguars Getting on the Right Track?

With two wins in their last three following a long winless streak, perhaps the Jags are starting to find some answers. Granted, the wins came against a down Miami team and against a Buffalo team dealing with issues, including an undermanned offensive line. But for them, they’ll take success in any form. They didn’t get in the end zone Sunday and QB Trevor Lawrence went down with an ankle sprain. They were without leading back James Robinson and his possible return gives the offense a big boost. They are missing WR DJ Chark, but with new tight end Dan Arnold, Jamal Agnew, Marvin Jones, and Laviska Shenault maybe they can soldier on in not so bad shape.

The Jacksonville Jaguars defense isn’t really that bad. It’s not just the 6 points allowed to the generally high-powered Bills last week. All season, they’ve been pretty effective against the run, something that would come into good use this week with red-hot RB Jonathan Taylor wreaking havoc for the Colts. The Jaguars “D” still is not great, particularly against the pass. And they don’t really get a lot of turnovers. Against Wentz and his aerial weaponry which has been showing upside lately, this stands out as a potential sore-spot.

Big Spot for the Colts

With anything possible in the division and wild-card picture, getting to .500 after such a rough start to the season would really put wind in the Colts’ sails. In the last month, their only setback was an overtime loss to Tennessee. Other than that, we’ve seen an offense starting to come into its own. Taylor has been good and Wentz is connecting big-time with Michael Pittman. They can get good tight end play with other receivers chipping in, including TY Hilton if he can get back into action this week.

It seems like Carson Wentz is growing in comfort in the system. He started off ragged, likely affected by two injured ankles, With growing healthfulness and becoming more accustomed to a complicated offensive system, we see this offense coming around. There is a lot of balance with Taylor and Nyheim Hines coming out of the backfield, along with any number of pass-catchers who can deliver with production. Against the Jacksonville “D,” Wentz should have ample opportunity to make things happen.

Sticking Point for the Colts

Seeing the Jets put up 30 on them last Thursday illustrates that the Indianapolis defense might be lagging behind the offense in terms of coming around this season. And not that Jacksonville has really fired it up offensively this season. And neither of their two wins were a result of prolific offensive output. But with wins comes more comfort and after a half-season under his belt, maybe we start to see better of Trevor Lawrence and his weapons. Getting Robinson back in there is key, being that with Chark out, the star-power is pretty thin on this side of the ball.

The Indy defense can be pretty leaky against the pass. They’re better against the run. What they do have that the opposing team does not, however, is a playmaking element that can really turn a game in their favor. With ten picks and ten fumble recoveries, they are the most-disruptive “D” in the league through half a season. With Darius Leonard running around and DeForest Buckner getting after it up front, this is a unit that can really be tough on a young offense like Jacksonville’s, especially if they are compromised with Lawrence, Robinson, and others ailing.

It’s just with the Colts’ defense, you can’t be that sure. No matter who they’re playing, there is always the potential for problems and for the opponent to have among their better games of the season. It’s an inconsistent group, but their defensive performance usually comes down to how good the opposing offense is. In games against Miami, Houston, and San Fran, the “D” was on-point, while basically being run ragged in their other spots. The possibility that the Jacksonville offense can find success in this spot after going against a tough Buffalo “D” the previous week is a very real one this Sunday.

Holding Buffalo to six points last week, with Indy allowing 30 to the Jets is a concern. And that Indy “D” can undermine the whole operation. If Jacksonville can curtail Taylor and put a crimp on the Indy aerial game as they did last week to the Bills, this won’t be easy. But I suspect we’ll see more offensive proliferation from the Colts this week, with a battered and largely-ineffectual Jacksonville offense struggling to keep their nose above water. I’ll take the Colts.

Loot’s Prediction to Cover the Point Spread: I’m betting on the Indianapolis Colts minus 10.5 points. Bet your Week 10 NFL picks for FREE by grabbing a 100% REAL CASH bonus on your first deposit of $100 to $300 at MyBookie Sportsbook! Simply use bonus code PREDICT100 on their registration page and it’ll activate the bonus after you make your first deposit!