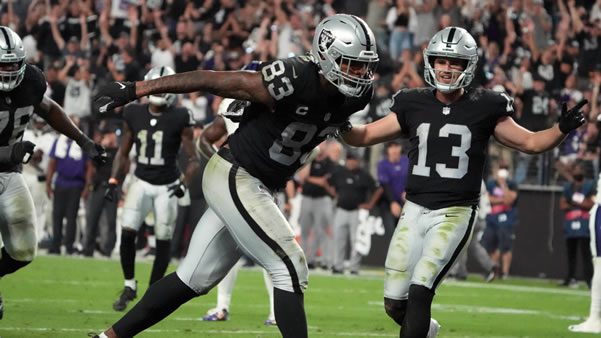 Week 10 Sunday Night Football comes to you from under the lights of Las Vegas as the Chiefs visit the Raiders. These teams will look to separate from the pack in the hotly contested AFC West, and the linesmaker has made the Chiefs 3 point road favorites. Let’s continue to fade the Chiefs and buy a Raiders +3 ticket. Here is the handicap.

With all of the things that have happened in the past 20 months that we call unbelievable, the collapse of the KC offense has to rank towards the top. Patrick Mahomes is the heir to Tom Brady as the next GOAT, but 2021 has been a major step back. KC ranks a pedestrian 13th in the league in both points scored and yards per play. In the last three weeks, Mahomes has led the Chief offense to 12 points per game against the Titans, Giants, and Packers. The demise of the KC’s potent attack has been well documented. Defenses are sitting back, not letting Tyreek Hill bust a long play, and making KC put together long drives. Andy Reid is one of the greatest offensive minds in the game, and with Mahomes, you would think they could adapt, but it hasn’t happened yet. They have refused to run the ball down the opponent’s throats, and the offensive line has not lived up to their pre-season billing. Mahomes is quick to bail out of the pocket and has thrown ten interceptions already, most of them trying to make something out of nothing on a broken play. No playmaker has stepped up outside of Hill and Kelce. All of this adds up to a mediocre offense, and that’s what Reid will bring to Vegas this week.

The Raiders defense has raised their game this year for Defensive Coordinator Gus Bradley. They rank 11th in points allowed and 4th in the opponent’s yards per play. More relevant when playing the Chiefs, the Silver and Black rank 2nd in opponents yards per pass attempt allowed. They rank towards the bottom of the league against the run, but that is less consequential against the Chiefs. The Football World continues to expect that this will be the week KC’s offense wakes up and reverts to their 2020 form, but it’s not happening. In fact, over the past three weeks, it keeps getting worse. Last week KC managed just 237 total yards against a mediocre Packer D. We should expect more of the same this week, the Raiders will play soft, and Reid and Mahomes will have to prove they can stay patient, and then punch in touchdowns when they get in the red zone. I don’t have any confidence that will happen on Sunday in Vegas.

LV Will Score Against the Chiefs

Derek Carr has the Raider offense moving in 2021, with or without Jon Gruden. LV ranks 9th in the league in yards per play and 4th in passing yards per game. Carr is completing 67% of his attempts for a very respectable 8.2 yards per attempt. Losing Henry Ruggs limited the Raiders deep passing ability last week, but LV went out and signed DeSean Jackson, which should fill that void. Carr has been peppering Darren Waller and Hunter Renfro over the middle and in the short passing game and should have success again this week doing the same against the Chiefs. The Raider running game is respectable, with Josh Jacobs having his best showing of the year last week in the loss to the Giants. The Silver and Black offense matches up great with the Chiefs. They will be able to control the ball, put together long drives on the ground, and with their short passing game to keep the Chief offense on the sideline while putting points on the board. Just because the Chief defense held Jordan Love to 7 points doesn’t mean they have figured anything out. Even with the good numbers last week, KC is still 31st in the league at opponent’s yards per play. There is really no reason to trust this KC defense. They have been okay against Love and Daniel Jones the week before but have been toasted all year. Safety Daniel Sorenson has been the biggest culprit of the Chief’s struggles. He has been replaced in the starting lineup, but he manages to find his way on the field, and opponents are lighting him up. LV will be able to take advantage of him either with Waller or another weapon. The Raiders have topped 30 points in half of their eight games thus far this year, and we should expect that to happen again this week.

The only team with a worse Against the Spread record than the Chiefs 2-7 mark is the Washington Football Team at 1-7. The difference in those two teams is that the market is continually downgrading the Football Team so that at some point, there will be some value on them. However, the market (primarily the public) continues to think this will be the week the Chiefs all of a sudden turn it on and return to form, so they keep betting KC, and the line has never compensated for how bad the Chiefs look. This line of Chiefs -3 on the road implies they are 4 or 5 points better than LV on a neutral site. This is despite the fact the Raiders have a better record, better points differential, and overall better stats. Over the past month, the Raiders have played better ball than KC. The Raiders have had a ton of issues, they got by losing Gruden without missing a beat, but the Ruggs events may have taken the wind out of the last week. I look for a bounce-back at home for the Raiders this week.

Until KC proves they are on the right track, the play is to fade them and buy a Raider ticket this week on Sunday Night Football.