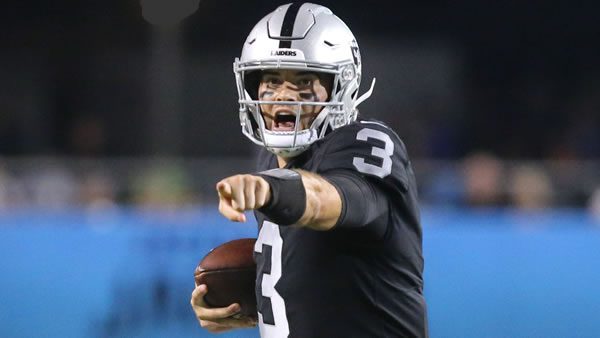 The Kansas City Chiefs take on the Las Vegas Raiders on Saturday at Allegiant Stadium in week 18 AFC West action. A 27-24 win over
Denver on Sunday was Kansas City’s fourth win in a row as they look to close out the season strongly. The Raiders lost on Sunday to the 49ers, 37-34, but surprised some in being competitive and taking San Fran to overtime. Will they relish the role of spoiler at home, or will Mahomes and the Chiefs romp in pursuit of the top seed in the AFC Conference?

Obviously, the notion of a pumped-up week 18 Chiefs team, as opposed to one phoning it in, would be a big difference. I don’t really see an angle where the Chiefs would be anything less than ultra-urgent for this. Granted, the harrowing events of MNF have created some murkiness, but the Chiefs still can forget about the top seed if they lose this game. They’re going to need a win this week and for the Bills to lose one time, and we don’t know as of press time if that’s going to be one or two games that Buffalo will be playing. With a chance of getting all their playoff games at home, along with a first-round bye, I’d expect to see a Chiefs team on Saturday with a lot to play for.

Mixed Signals from the Raiders

Again, last week’s performance, where the Raiders pushed the streaking Niners to their limits in taking them to overtime, contrasts a lot of what we’ve seen. The Raiders seemed to be closing the season in turmoil. On the heels of a major letdown season, we see Derek Carr just gone for reasons that aren’t clear. Joshua Jacobs is mouthing off. We’ve seen various top players on this team melting down over the late part of the season. On top of that, they were starting Jarrett Stidham at QB, a move that fostered little confidence. And then you tune in and see the Raiders’ offense moving pretty well. Stidham threw for three TDs and 365 yards, Jacobs was productive, and Davante Adams had a huge game. In addition, the return of TE Darren Waller has started paying off. So while we have information that suggests a team just waiting for the season to end, some results on the field haven’t quite reflected that.

Do the Raiders Match Up Well?

For a team looking to pull an upset against a motivated Chiefs team, they’re not as hopeless as some would think. That offensive upside the Raiders possess, in conjunction with the exploitative state of the Chiefs’ defense, has seen them purporting themselves well against the high-powered play of Kansas City. While it was a long time ago now, by week 18, an early-season 30-29, loss showed the Raiders matching up well with the Chiefs. Jacobs and Adams had big games, and that kind of firepower makes it a tough game for Kansas City and their middling defense. But let’s not forget Patrick Mahomes connecting with Travis Kelce for four touchdowns in that first game with the Raiders, as the Vegas defense will also be a major matchup snafu in this game.

In other words, we know what a pumped-up Chiefs offense can do with this Raiders’ defense. That part of this equation-shootout seems almost locked in. But with Jarrett Stidham at QB, lesser overall urgency, and that defense, will the Raiders be able to fulfill their role in this game? I’d assume the Chiefs’ defense will be playing with some extra energy this week. Still, against a good SF defense, this Raiders’ offense delivered, so you can’t summarily rule them out. If they came out all ragged against San Fran, as some suspected would be the case, this would be way more of a slam-dunk. Performing well against a “D” like that last week, however, has to command some respect for a team getting better than a touchdown at home.

More Picks: Tennessee at Jacksonville Week 18 prediction against the spread >>>

Over the last several seasons in the Mahomes era, we’ve seen a Chiefs team generally able to deliver in key late-season spots. Whether it’s their play in the postseason or late-regular season sequences where they need something good to happen, they usually manage to come through. Sure, there have been some sore spots along this patch, but losing the Super Bowl or coming up short last season to Cincinnati is a different kettle of fish than what this game represents. In these spots, this recent KC team has been fairly bankable. And the Raiders playing the Chiefs close early in the season in a much lower-stakes position maybe should provide little comfort for Raiders backers thinking they can replicate that level of competitiveness in the final week of the season with the Chiefs needing a win with Stidham behind center.

One doesn’t want to get too carried away in praising the Raiders for last week’s solid showing while also not dismissing it altogether. But having some individuals who are playing well and trying hard might not be enough this week. You have a Chiefs team that will be looking to win, while ratcheting up their form in time for the postseason, one that will likely be very tough. Granted, the Chiefs have basically been a disaster this season in an ATS sense, oftentimes playing down to the level of opponents while being less-likely to really blow out a team. I just sense a more-thorough showing this week against a Raiders’ team that I suspect might not be able to equal last week’s form. I’ll take the Chiefs.

Loot’s Prediction to Cover the Point Spread: I’m betting on the Kansas City Chiefs minus 7.5 points. Bet your Week 18 NFL picks for FREE by scoring a 100% real cash bonus up to $300 when you use bonus code PREDICT100 at MyBookie Sportsbook!