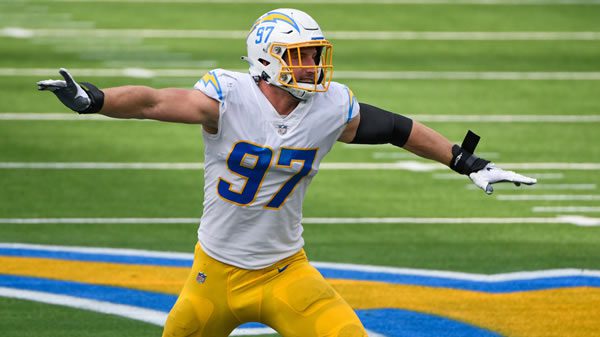 This week, the Los Angeles Chargers come to Arrowhead to battle the Chiefs in a contest pitting two teams trying to rebound from disappointing week two performances. Intertops has made the Chiefs 6.5 point favorites and set the game total at 55.5. The play is to take the Chargers and the points. Here are three reasons.

KC Has Not Been Covering

The Chiefs have been racking up wins on the field over their last nine regular-season games but haven’t been cashing tickets for their backers. Over those nine games (throwing out the week 17 meaningless match), they have been favored in all nine, won the eight games previous to last week, but only covered one time. Either the Chiefs run out to a comfortable lead, take their foot off the gas and allow a back door cover, or come back for a win in the few cases they were behind in the second half. We have to be careful to bet trends blindly, but this one makes a lot of sense. KC and Coach Andy Reid don’t have anything to prove, don’t care about style points, and are only interested in winning Super Bowls. They have the belief that they can always come back to win, and if they are ahead, they don’t worry about opponents taking the lead because they can always score when needed. Last Sunday night’s game was playing out that way until the fumble in the closing minutes ruined the plan.

But this plan may work to win the games, but not to cover. NFL teams are all capable of scoring – especially against the Chief defense, which can give up points in a hurry. I thought the Chiefs would give a full 60-minute effort last week on the road against Lamar Jackson and the Ravens, but instead, we got spurts of greatness followed by spurts of mediocrity. Maybe the loss will wake them up and make them realize they can’t sleepwalk through these games, but more likely, they let the Chargers hang around and pull one out in the end. I want to see KC get some killer attitude before believing they are going to bury an opponent.

The Chargers Match Up Well With the Chiefs

As mentioned above, the Chiefs defense is capable of giving up points in a hurry, and the Chargers are capable of scoring points in a hurry – although they haven’t proven it yet this year. LA ranks 25th in points scored in the young season but is 5th in yards gained. These stats shouldn’t go together, and I think this week, the points scored will start to catch up. Justin Herbert is rounding into a top NFL signal-caller after garnering the Offensive Rookie of the Year Award in 2020. The group of Keenan Allen, Mike Williams, and Austin Ekeler will make Chief Defensive Coordinator Steve Spagnuolo defend the entire field, and Jared Cook gives Herbert a solid outlet over the middle. The skill players are the best group KC has faced this year, and Herbert is the best thrower KC has faced. LA also leads the league in 3rd down conversions, so there is every reason to believe they will clear the hurdle and score a lot of points this week.

The Charger defense also matches up well with the Chiefs. Everyone knows that Mahomes and the Chiefs won’t be shut down, but opportunistic defenses can win some battles with the Chiefs. Joey Bosa and Derwin James are 2 of the best defensive playmakers in the league. Bosa can get a strip-sack on any snap of the game, and James can impact the game on the back end. We saw the way to beat the Chiefs last Sunday Night, with a game-saving play by the defense, and LA has players that can deliver this.

Something Is Wrong With the Chief Defense

KC’s defense ranks 29th in the league in points allowed but dead last in yards allowed while giving up 7.6 yards per play. Last year the Jaguars had the worst yards per play allowed at 6.3 yards, so this Chief defense has issues. If it weren’t for the Falcons’ horrendous defense, KC’s defense would be the worst defense in the league. Their opponents have been in the red zone on eight occasions during the first two weeks and have put up touchdowns on all eight occasions. Chris Jones has a couple of sacks on the year, but mostly KC hasn’t gotten pressure on opposing QBs. This has resulted in receivers running wide open in the secondary. Lamar Jackson and Baker Mayfield – 2 quarterbacks that aren’t especially accurate – have completed 72% of their passes for 10.4 yards per attempt.

Spagnuolo should be able to get this mess figured out, but we shouldn’t expect it will happen this week. It could be we start to see some new faces getting some time on the defense, or maybe Spanuolo dials up more blitzes this week. If the defense isn’t better this week, the Chiefs could lose again and fall to last place in the AFC West.

Look for the Chargers to cover the 6.5 point spread this week at Arrowhead. Herbert and his weapons will be able to score against this defense and keep up with Mahomes or get a backdoor cover if they are to get down by a couple of touchdowns. Bet your Week 3 NFL picks for FREE by taking advantage of a 100% REAL CASH bonus up to $300 at MyBookie Sportsbook! Simply use bonus code PREDICT100 when you register!