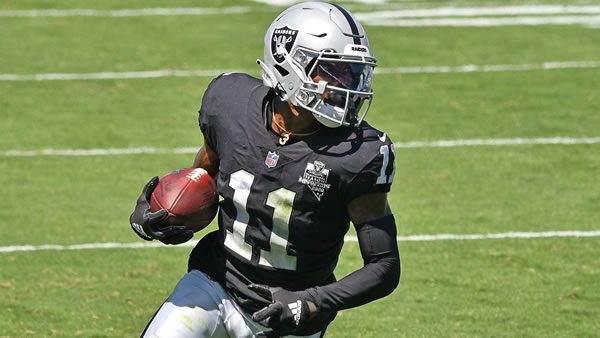 The Miami Dolphins come to Sin City to battle the Las Vegas Raiders on Sunday in AFC action. For the Raiders, they return home after a triumphant 26-17 win in Pittsburgh last week. Starting to heat up, the Raiders look to make it 3-0 this week. For Miami, this is a long road trip following a disheartening shutout loss to the Bills on Sunday. After opening with a win over the Patriots, Miami will be looking for answers after an inept showing on both sides of the ball. Can they stop the bleeding in Vegas, or will the Raiders continue to roll?

After an uneven start to the season against the Ravens, the Raiders have been surging for the better part of the last six quarters. With 817 yards through two games, Derek Carr has been pouring it on. A lot of what was hoped for has materialized. Darren Waller, Henry Ruggs, Hunter Renfrow, and Bryan Edwards have all been contributing through the air. If Joshua Jacobs returns, that gives their offense a big boost, but they looked pretty good without him on Sunday. With a lot of new pieces, the offensive line was a major question, and through two games, it has held up fairly well. And that has allowed Derek Carr to showcase his wares.

The Raiders’ defense has grown a bit, as well. Solomon Thomas had two sacks on Sunday, and with Maxx Crosby, the line has grown more respectable. Denzel Perryman and KJ Wright have made the middle more formidable. And we see youngsters in the secondary making more plays, with Trayvon Mullen and Jonathan Abram coming around. In summary, through two games, we’ve seen John Gruden’s vision manifesting as clearly as it has during his whole tenure. And sometimes, it’s not about what a team has, but how well they’re putting it together. From that standpoint, the Raiders look really good. Then again, just as judging Miami off a week, one window would have led you astray in week two, we have a pretty small sample size upon which to base a conclusion on the Raiders.

Can Miami’s Offense Get it Together?

It’s natural to get down on a team on the heels of a shutout, even more so when it was at home, and QB Tua Tagovailoa only lasted a few series before getting knocked out with a rib injury. In came Jacoby Brissett, unquestionably a capable quarterback with a lot of experience for a backup. However, beset in a Miami offense that is already rife with issues, it’s going to be even more of a grind. The Dolphins’ offensive line is really looking rough through two games. And the movement of the offense seems directionless. No one is taking a featured role, the run is stagnating behind a line that isn’t getting any push, and a defense getting no support is waning as a result.

At the same time, that’s a rough assessment off of a one-game window when it follows a win over the Patriots on the road. There is no question that a certain level of dysfunction permeates this Miami offense. But some people might go too far in putting the police tape around the Dolphins locker-room when they’re still a team showing a lot of upward mobility under Brian Flores. Expecting last week to be the status quo could lead a bettor astray. Losing Tua or having him compromised hurts, but then again, it’s not like he’s been shining in this role lately. Still, news that no real damage was done bodes well for him to give it a go on Sunday.

What Miami Can Do

The Raiders’ offense is moving nicely now. Still, the Raiders are a developing team looking to become a factor. They haven’t arrived. And part of being a team that isn’t there yet is having things not always pan out. There are spells where the Raiders’ offense can languish, where Darren Waller is the only visible aerial threat on the field. The Raiders’ receivers are coming around, but there are spells where it stalls. Against a stellar Miami pass defense that didn’t show last week, this is a spot where the Raiders could see the going get tougher. The same applies to a maligned Raiders’ pass defense that has flipped the script the last few weeks. There’s nothing that says they won’t revert to worse form based on a semi-promising two-game window. With word that WR Will Fuller could be making his Dolphins debut on Sunday, maybe there’s some hope there.

If Miami can do some game management and not undermine themselves, it’s a spot where they could see a reversal of form from Sunday’s nightmare. We could see the Miami defensive front start to make more impact this week. They should curb some of Carr’s sharpshooting this week, and he is due to cool down a bit. We could see that this week. The Raiders’ run game is iffy with Jacobs hurting, making it so they can’t take advantage of the weakest part of the ‘Fins’ defense. Combine that with the possibility that the Raiders defense has been made to look better than it is based on the rampant mistakes of the offenses they have been playing, a case starts to form for Miami a little bit.

I think there is some possible value in the fact that the Raiders have looked pretty strong, with Miami coming off such an ugly shutout loss. There is a chance that the Raiders aren’t as good as they’ve been made to look. Whether it’s an overperforming offensive line, secondary, or passing game, Miami is likely to put a crimp in at least one of those things. Granted, such a view requires one to basically ignore what we saw last week, but I like the Dolphins this week.