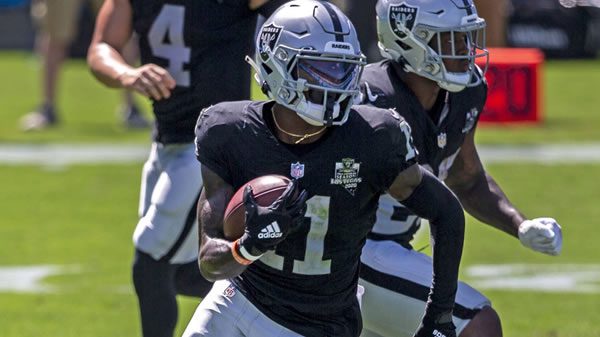 The Chicago Bears come out to the desert on Sunday to face the Las Vegas Raiders in key week five action from Allegiant Stadium. On MNF, the Raiders fell on the road to the Chargers, 28-14, in their first defeat of the season. They look to make it better in a winnable home spot on Sunday against the Bears. Last week, Chicago was positive in getting back to 2-2 with a 28-16 win over Detroit at home. They now come cross-country and out of their conference to battle the Raiders coming off the short week. Who can get it done in Sin City this Sunday?

Last week was a big week for Chicago. Not that evening their mark at 2-2 or beating Detroit at home signals any kind of revival. But after such a poor showing from their rookie first-round pick QB Justin Fields, Sunday was important in getting him some confidence, as well as showing his team that he can handle this. He wasn’t electric by any means, but merely being halfway-competent was a big jump from his first showing when they got battered by Cleveland the previous week. It’s just that RB David Montgomery was a big part of that equation, and he’s going to be out for the foreseeable future, putting a major hurt on Chicago’s struggling offense and stripping them of their best weapon. Still, Fields showed a nice chemistry with WR Darnell Mooney, and they look to get Allen Robinson more involved after a slow start.

With most eyes on what Fields is doing and the state of the Chicago offense, the defense has quietly taken over two games so far this season. And they’re always a threat to do so, no longer the shutdown unit of a few seasons ago, but still very good. Even when the offense isn’t doing its share and leaves the “D” out to dry, they seldom get run over. They can take a team’s best player and render him moot. The Raiders have shown some good offense in spots, but they’re dealing with some issues.

Against the Bears in this spot, you wonder if the Raiders can get their run-game sparked. Joshua Jacobs was back in action on MNF, obviously a little off and held back. He should be closer to a full-go this week, but this might not be an easy spot for him to recapture his form. We also see the Raiders failing for long stretches of the game to get their passing game sparked. Sometimes, guys like Henry Ruggs and Bryan Edwards simply disappear from the Raiders’ offense. It’s just that after watching them struggle so hard against the Chargers in a 14-point output, this isn’t an ideal defense to see things get markedly better.

Raiders: A Tough Week or More?

The Raiders did in fact come up woefully short on MNF, never really looking the part of a winner at all despite showing signs in a third-quarter comeback that eventually fell flat. I think it would be foolhardy at this point to regard them as being exposed based on what occurred on Monday. There were areas of touted improvement that resonated less against the Chargers, but very well could manifest better this week against the Bears with their deficits in overall firepower. The Chargers were able to run and throw the ball well in stretches against the Raiders, something the Bears will be unable to do, especially with Montgomery now out.

The Chargers did well in spots keeping the Raiders’ pass-rush in check, but I look for that part of the Raiders’ game to manifest better against this Chicago offensive line. And with the lack of dump-off options and overall Chicago aerial supremacy, the Raiders front-seven should get back to looking how they did in the first three weeks of the season on Sunday. The improved Raiders’ secondary, something that was exposed in spots on MNF, will be in a far-better matchup this week at home against the Bears’ last-ranked passing offense. Having Trayvon Mullen and Damon Arnette leaving the last game with injuries and listed as questionable for this, however, makes that more of a problem area for Las Vegas.

More Picks: Get Horne’s Take & Pick ATS on the Giants at Cowboys Game >>>

The Bears’ QB situation is up in the air. Dalton should be due to return, Do they put him back in, or do they see what Fields can do? Either way, not having a solid QB situation with Derek Carr on the other sideline is not an edge. Neither is the utter shortage in firepower with Montgomery out. Even if the Raiders defense isn’t that great after all, Chicago is unlikely to test it with the inconsistent duo of Mooney and Robinson being relied on to do the heavy lifting. And while the Chicago defense of 2018 could make life hard on Carr and Company, I’m not sure this one can shut them down to any kind of extent that allows their offense to hang in there.

I’d almost be more inclined to take the Bears if the Raiders won on MNF, but with a little extra urgency to correct that misstep, I don’t see the Raiders dropping two in a row. In fact, I see them going even more out of their way than otherwise would be the case to avoid that. I see a good bounce-back opportunity for the Raiders’ defense this week in a spot where they could thrive in spots. And while their offensive ascent might be curtailed by the still-formidable Bears’ defense, I don’t think the Raiders will need a ton to overcome this spread. I’ll take the Raiders this week.

Loot’s Prediction to Cover the Point Spread: I’m betting on the Las Vegas Raiders minus 5.5 points. Bet your week 5 NFL picks for FREE by taking advantage of a 100% REAL CASH bonus on your first deposit of $100 to $500 at GTBets!