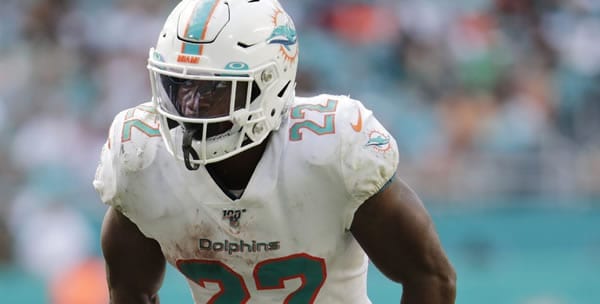 The Miami Dolphins take on the Indianapolis Colts on Sunday at Lucas Oil Stadium. The Dolphins were able to get in the win column last Sunday, winning at home against the Jets, 26-18. We’ll see how they do on the road this week against what might be a compromised Colts team. Indy really should have won against the Steelers, falling 26-24, when a late FG failed. In losing starting QB Jacoby Brissett for the time being, they now have even more to overcome. But still at 5-3, they’ve done pretty well so far facing tough conditions, so maybe an incoming Miami team is the perfect matchup.

They certainly are not a good team, but with an 8-point win over the Jets, maybe the gap between them and the rest of the bottom-feeders isn’t as wide as previously suspected. The first four games of the season saw them looking completely hapless, losing by a combined score of 163-26. Their last four games have opponents outscoring them but to a far less-unsightly tune of 91-77. In other words, they’re more competitive, and their 4-0 ATS mark in their last four games attests to a certain upswing.

Still, there are any number of issues that the Colts can pounce upon. Ryan Fitzpatrick can be dangerous and is always a threat to implode. The Indy secondary hasn’t been looking too tip-top lately and isn’t making a ton of plays, which could help a mistake-prone Fitzpatrick. Still, he’s a guy who can be lethal when in a rhythm, and he seemed to find one against the Jets. This is a far tougher matchup, however. They could be developing some interesting receivers with Mike Gesicki, along with the faded DeVante Parker, and other youngsters making their presence known. With Mark Walton suspended, they are now even deeper in the barrel with running backs, with Kalen Ballage the lead back. With little variety to throw at the Colts, we’ll see how that comes off. In other words, the spurt against the Jets was a good sign, but even in optimal conditions against a sideways defense, they managed a whopping 26 points.

How Compromised is Indy?

Jacoby Brissett deserves a lot of credit for stewarding the team to a 5-3 mark as a starter this season, so losing him has to hurt. But at 34, Brian Hoyer still has something left in the tank, and on Sunday, he threw three TDs, connecting with Zach Pascal, Chester Rogers, and Jack Doyle. Still, being without TY Hilton makes one wonder how many pieces this offense can lose and still maintain its edge. Having a difference-making backfield really helps, with Marlon Mack and Jordan Wilkins adding a lot of production. Hoyer is an experienced guy and operating behind a rock-solid offensive line; he should be able to fill in capably in the short-term. But that placekicking is an ongoing issue, and while one is inclined to pull for Adam Vinatieri from a sentimental standpoint, this team is in a lot of close games, and that part of the game needs to be solid. It’s cost them this season, as well as bettors.

Now would be a good time for the Indy defense to step up and make up for the personnel issues on offense. So far this season, it’s been a mixed bag. There have been some good things, like some late-game grit, as all their wins are of the one-score variety. Their pass-rush has been decent in spots, and this could very well be one of those. But the rigidity and overall playmaking from last season isn’t as much in evidence this season. That could be injuries or an offense not being as dominant. But the “D” has taken a step back. Still, at their best, they would appear to be a robust test for the ‘Fins.

From a Layman’s Perspective

With the Colts, you have a team unable to score with the same ease of before. They really have to manufacture points. Miami’s defense is by no means good, but failing to acknowledge their improvement could put us on the wrong path. Hoyer was obviously not a top choice to lead this offense, and without their primary aerial weapon, maybe Miami can duplicate some of the better play they’ve been producing lately. With Fitzpatrick back there for Miami still slinging darts against a so-so Indy defense, it’s not that crazy to picture them being able to keep pace. We saw Indy able to keep it together nicely with the abrupt retirement of Luck, as well as other personnel issues. But as the second half of the season begins, will they be able to keep it going? Or will we see them start to fade?

After all, this is a significant number for the Colts to cover. They’re facing a team that finally has something to feel good about, and they need to cover a big spread with a guy who wasn’t even among their top two choices to run this offense. Their opponent has covered four straight spreads, and it’s unclear whether this is the best spot to anticipate a big game from the Colts.

One could make the case that the Colts won’t be that depreciated and after losing last week, will be looking to pour it on against a 1-7 Miami squad that is facing a tough road-trip. If one were to look up and see a 31-14 score late in the game, it would hardly be a surprise. I just sense some scrappiness lately with the Dolphins, and when combined with this seeming like a weird time to lay a big number on Indy with all they have going on, a stance on Miami seems reasonable enough. I’ll take the points.

Loot’s Pick to Cover the Point Spread: I’m betting on the Miami Dolphins plus 10.5 points. This is the final week of the 100% bonus up to $1000 at MyBookie! Get it before it disappears!