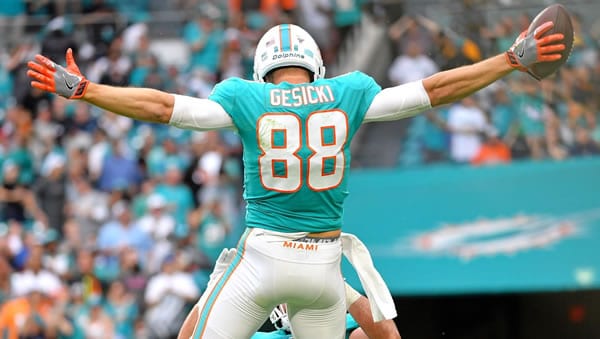 The Miami Dolphins come to MetLife on Sunday for an AFC East showdown with the New York Jets. Miami is coming off the long week, winners of their Thursday Night Football matchup with the Baltimore Ravens, 22-10. Despite being 3-7 and having numerous issues team-wide, they have won two in a row. They look to follow up their upset win in a manageable spot against a Jets team that got walloped on Sunday in a 45-17 loss to the Bills. Five turnovers and limited defense spelled an end to the recent Jets’ “surge,” where they were showing more resistance. Who can get it done this week at MetLife?

This is the first meeting of the year between the Dolphins and Jets, as both teams will also meet several weeks from now. At first glance, it would appear to be a battle between two down divisional teams, and that may be true, but recent showings have us perhaps retooling that perspective a bit. The Dolphins beating the Texans is one thing, but upsetting the Ravens at home really showed the ‘Fins looking good. With Tua hurt and not expected to play, he was jettisoned into action as Jacoby Brissett was injured, And despite all this, they were able to cruise to a win over their heavily-favored opponent.

Allowing a combined 19 points in their last two games shows the Miami “D” finally living up to the standards they established last season. And in the game before that, the Buffalo offense was only able to get things rolling late, keeping the Bills in check most of the game. It’s been a sore spot all season, where a stout and disruptive “D” that had a lot to do with the Miami surge last season simply went into the tank this season. But recent weeks show a resumption of that form, which could make Miami dangerous in the second half of the season.

Can the Miami Offense Keep Pace?

The Dolphins’ quarterback situation is in flux. Outside of sporadic contributions from Myles Gaskin, running the ball is a futile endeavor with this team. Their leading receiver DeVante Parker has been out of action. That leaves one of their generally-mediocre quarterbacks with no run game and a line that does a poor job, working with rookie receiver Jaylen Waddle, tight end Mike Gasicki, and whoever pops on a given day. It’s not a group that will be able to deliver on a weekly basis. Their recent success is based on their defense stepping up, not to mention playing the Texans and a Baltimore team that looked as bad as it had all season.

It’s just that in this spot, keeping pace might not be so easy with Miami. In this context, the Jets have been able to flash more offensive upside. It could come down to what you think of the Miami “D” and if their recent spurt is a sign of real advancement or just good timing and being in advantageous spots. Nobody is immediately due to get back into action the Miami offense, so they’ll have to make do with what they have, which by NFL standards, isn’t a whole lot.

A team heading into a week where three different quarterbacks can start says about all one needs to know. Zach Wilson could conceivably be ready to get back in there. It’s unclear if it’s the recovery from his injury or the lack of optimism surrounding his return that caused him to miss the last game. One would assume after a four-pick game; the shine is off Mike White. Getting erstwhile Joe Flacco in there says as much, with the veteran connecting with Elijah Moore for the lone bright spot in the Jets’ aerial game. They’ve got their best offensive work this season from White, while Wilson is the high draft choice. It could be Flacco who is the most-steady hand. We’ll see where they turn.

Either way, it’s a pretty dire situation. Heading into week 11 with two covered spreads with the bookies going out of their way to dangle a nice quote shows they’re even worse than people think, and people think they stink. They have some interesting pieces on offense, with Michael Carter productive at running back in spots, along with a receiver crew that isn’t devoid of talent. But there is zero star-power or even consistent producers on this side of the ball, and with a substandard line fortifying it, the sources for optimism are few.

X-Factors in Favor of the Jets

They are at least facing a Miami team dealing with a lot of similar issues—a dicey QB situation, no run-game, a defense that can be readily exploited, and a pass-catching staff that elicits little fear. At home, this is a spot where even a Jets team can cultivate success. The Jets have had a recent run of some tough opponents, and maybe getting a bad team at home can give way to better play. They can maybe run the ball a little better. Other than the knee injury to Wilson, they’re more-intact personnel-wise. Maybe they’re actually somewhat in their wheelhouse in this spot.

Lay the Points on the Home Dog

Recent memories of the Jets flailing on the field as they’re getting bludgeoned by the Bills makes taking them a difficult move this week against a team that has won two in a row. I see Miami coming down to earth a little this week and showing that this is still their realm. When the Jets beat the Bengals the next week, they were battered by the Colts. These spurts with this level of a team can be short-lived. I see a close divisional game where having the points will come in handy. I’ll take the Jets.

Loot’s Prediction to Cover the Point Spread: I’m betting on the New York Jets plus 3 points. Bet your Dolphins/Jets pick and ALL your week 11 NFL football predictions for FREE by taking advantage of a 100% REAL CASH bonus on your first deposit of $100 to $300 at MyBookie Sportsbook! (Must use bonus code PREDICT100 in order to qualify for the special bonus). Click here to sign up now!