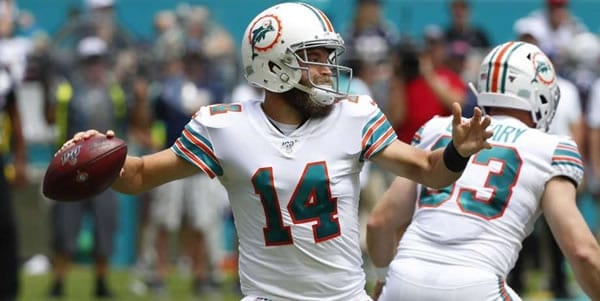 The Miami Dolphins visit the Steelers on Monday Night Football to close out the NFL’s Week 8 slate. The story for the 2019 Dolphins is mostly about can they cover the spread, not can they win the game, and this week is no different. Sportsbooks are making Pittsburgh 14½ point favorites, and we will gladly take the 14 and expect the Dolphins to cover the number on MNF. Here are three reasons.

Pittsburgh Is Due to Lay an Egg

The Steelers hopes to compete for another Super Bowl ended in week 2 when QB Ben Roethlisberger went down. But Mike Tomlin’s squad has been resilient, and have covered the spread in all four games that either Mason Rudolph or Devlin Hodges has started while going 2-2 straight up. They have been underdogs in three of those games, only favored by 3.5 against the Bengals at home. Even in the two losses, Pittsburgh was competitive and had a chance to win the games. They had their bye last week and have been thriving as the underdog, but this game will have a different feel. Pittsburgh is double-digit home favorites, which is a position they have not responded to well under coach Mike Tomlin, compiling an 11-20 ATS record as double-digit favorites since 2005. The Steelers still have a remote chance to sneak into the playoffs and have a big game in week nine against the Colts that will almost certainly be a must-win for Tomlin’s squad to get in the tournament, so their focus will not be on the lowly Dolphins.

Pittsburgh’s offense has been abysmal in 2019, with or without Big Ben. They are averaging 5.1 yards per play; their leading rusher James Conner is averaging 3.2 yards per carry and Rudolph won’t throw the ball down the field. Since Roethlisberger has been out, they have only gained over 300 yards against the Bengals, and the game plan has been ultra-conservative to minimize the chance of a turnover and give the opposition a short field. This will definitely be the plan this week. The Steelers will fully believe they can win this game just by showing up. This has been the curse of Mike Tomlin that may come back to haunt him this week. With Pittsburgh coming off the bye after a good win against the Chargers and the Colts on deck, look for Tomlin and the Steelers to sleepwalk through this game.

Get every game preview each week: NFL Football Picks >>>

Ryan Fitzpatrick took over from Josh Rosen in the middle of the week six game against Washington and instilled some life in Miami. Mark Walton supplanted Kenyon Drake as the lead running back, and finally, Miami looks like an NFL team – granted it is a bad NFL team, but it is not as bad as the product that was on the field in the first four weeks of the season that they were outscored by a combined 137 points. The Dolphins led the Bills last week in Buffalo into the 4th quarter after losing to the Redskins in week six by not converting a 2 point try. Fitz-magic threw for 282 yards last week against what is considered one of the best defenses in the league. The offense with Fitzpatrick can move the sticks and score, and they will in Pittsburgh.

The Miami defense is also playing better. They held the Redskins to 311 yards and then the Bills to 305 yards. I realize neither of these offenses will be confused with the Chiefs, but they are as good as the Steelers led by Mason Rudolph. Miami recorded two sacks last week, and if they can pressure Rudolph this week, Rudolph may throw a couple of balls up for grabs. The lone remaining star player on the Dolphins is cornerback Xavien Howard, who has been out the last two weeks but should be able to suit up in Pittsburgh. If he does, he should be able to contain JuJu Smith-Schuster. This Dolphin team is a lot better than the one that took the field to start the year, but the lines are still being set with those games in mind.

How can a team with Mason Rudolph starting at quarterback be favored by more than two touchdowns? The answer is that the sports bettors have been betting against the Fins all year and cashing tickets. So now it is the revenge of the sportsbooks. The Books know that the public will keep betting against Miami no matter the spread, so why not inflate the line. Last week the Dolphins were 17 point dogs in Buffalo. If Buffalo and Pittsburgh played on a neutral field, the Bills would be at least 6 point favorites. Pittsburgh was 3.5 point favorites against the Bengals in week 3. When the Dolphins and Bengals play in week 16, the line will be about Bengals -3 or less, so this line should be closer to ten, but definitely less than 14. The Steelers are really a bottom ten team in the league, and Rudolph will be the one of the 2 or 3 worst quarterbacks to start a game this week. The Steelers are the better team, but it’s a lot closer than 14½ points.

Play the Fins on the Road

The play this week is to play Miami plus 14. Miami will definitely be the more motivated team this week for a nationally televised audience in a game they have a chance to win. They probably have three chances to win in the next ten weeks: this game, Week 16 against the Bengals, and week 17 against the Patriot backups. Mike Tomlin’s Steelers have a history of not covering big spreads (and losing outright), and it will continue this week. The sportsbooks will make up some of their Miami losses this week when the Fins cover this week; we need to be on the same side.