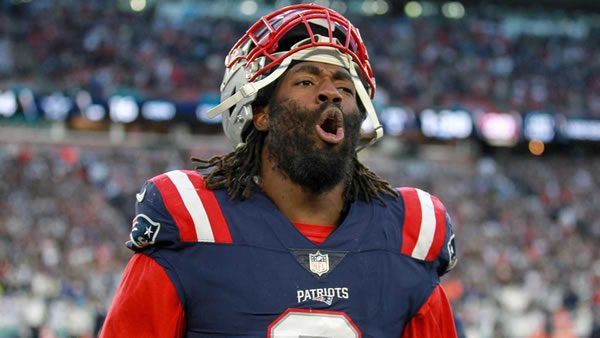 Point Spread: NE -2 / Az +2 (STOP overpaying for odds! Start saving money by laying only -105 instead of the spendier -110 option your book is hammering you with! Find this HUGE money saving offer at BetAnySports Sportsbook!)

Monday Night Football heads to the desert for a week 14 battle between the visiting New England Patriots and Arizona’s Cardinals. BOVADA.LV is making the Patriots 2-point favorites and setting the game total at 45. Let’s think, should we back Bill Belichick or Kliff Kingsbury in this one? That’s an easy question. The play is definitely to lay the 2 points with the road-favorite Patriots. Here is the handicap.

New England Can Score In Arizona

The Patriot offense has been very up and down on the season, but I think they match up well and will score against the Cardinals. Belichick wants to lean on the running and short passing games before mixing in some and play action passes to try for the big play. Running back Rhamondre Stevenson has stepped up as the lead back and is delivering week in and week out both in the running and passing attacks. Stevenson averages 4.7 yards per rushing attempt but is at his best catching the ball out of the backfield. He has six or more catches in 5 of the last six games and has the ability to break any play for a long gain. Mac Jones has played better over the past month of the season though he didn’t look good last Thursday against the Bills. Jones is solid when he has time to throw, which he should have in the desert. DeVante Parker and Nelson Agholor will look to have big games on the outside while Stevenson and Hunter Henry work the middle of the field. The Pats have recently scored 26 against the Vikings and Colts and should be able to have similar success this week against the Cardinals.

Arizona’s defense struggles with the items that are strengths for New England’s attack. The Cardinals rank 24th in the league allowing 4.6 yards per rush, and they rank 24th in sacks, only bringing down opposing QBs 23 times on the season. The Patriots will be able to run the ball on Monday night, setting up 3rd and short all game long while wearing down the Cardinal defense. Arizona has the worst Red Zone defense in the league, meaning New England has a great chance to close out long drives with touchdowns rather than field goals. Look for the Pats to control the line of scrimmage, matriculate the ball down the field, and come away with touchdowns on MNF.

Arizona’s offense has been one of the most disappointing units this year. They are merely 18th in points scored but 27th in yards per play. Murray signed a big contract in the off-season but hasn’t done anything to show he deserved the big pay-day. The four teams Murray has led his team to victories against have combined for a total of 16 wins. They have played better since DeAndre Hopkins returned to play six weeks ago, but they have lost 4 of their last five games. James Conner is the workhorse back that will carry the ball 20-plus times this week, but he only averages 3.9 yards per carry, and his longest rush of the year is 20 yards. I don’t think Conner will have much success on the ground this week or that Murray will be very efficient passing the ball, but Murray may be able escape the pocket and hurt New England running the ball.

The Patriot defense has been solid, except against dual-threat quarterbacks. They have played against Josh Allen, Lamar Jackson, and Justin Fields and lost to all three. Jackson ran for 107 yards, Fields for 82, and Allen managed only 20 yards last week. The Pats’ defense is slow, but Belichick understands his team’s weaknesses and will make adjustments. New England is 3rd in the league at sacking opposing quarterbacks, so Murray will constantly be under pressure that could lead to interceptions, which the Patriots rank 4th in. New England’s run defense will be able to limit Conner, forcing Murray win the game by passing. He hasn’t proven that he can do that against good competition this year.

Big Coaching Advantage For The Pats

Belichick is the greatest coach, at least of the modern era, while Kingsbury may be heading back to the college ranks after this year. Both teams suffered tough losses last week, with the Cards falling to the Chargers at the horn and the Pats falling to their division-rival Bills. We can’t count on Kingsbury to rally his troops, as last week’s loss probably eliminated them from any chance of making the playoffs. On the other hand, we can be sure Belichick will have his squad primed to rebound and keep their playoff hopes alive. We know the Patriots will come in with a game plan to exploit Arizona’s weaknesses, but we expect the Cardinals to continue their same streetball offense and hope Murray can produce some magic – that hasn’t happened much this year. The coaching advantage is immense for New England this week and really makes the difference in this game.

This week, the only play on Monday Night Football is to lay the short spread and buy a Patriot ticket. In Belichick, we trust, in Kingsbury and Murray, we don’t. Question: Did you know that we also offer free NBA picks each day?