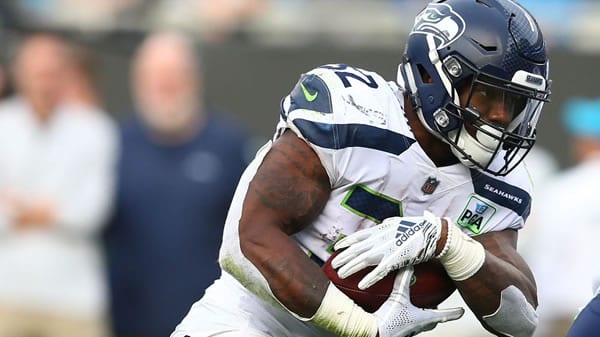 Here’s a bizarre statement: if the playoffs were today, this would be a first-round matchup. The Eagles hold a half-game lead in the absolutely pathetic NFC East thanks to their tie against the Bengals, and because of the NFL’s arcane seeding rules, they’d be the No. 4 seed right now and would host the top wild card team.

That team would be Seattle, who got back on track last week with a much-needed win over Arizona, stopping the bleeding a bit after three losses in four games. But the Seahawks haven’t exactly been anything special away from Seattle as of late, as they’re just 2-3 on the road, and their road wins were against Atlanta and Miami. Seattle’s offense has been fantastic for much of the season, but in recent games, the Seahawks have seen their lack of a defense catch up with them, as 34 points weren’t enough to win at either Buffalo or Arizona.

On the other hand, Philadelphia has a host of problems on the offensive side of the ball. Thirty-four points have been good enough to be a winning score every week in Eagles games; Philadelphia hasn’t managed to hit 30 points even once in 10 games. Can the Seahawks get back to their winning ways on the road, or will their offense short-circuit?
How the Public is Betting the Seattle/Philadelphia Game

The public hasn’t lost faith in the Seahawks, even if they’ve been struggling away from home. Seventy-nine percent of tickets have come in on the Seahawks, which has pushed the line from -3 to -5 to now -6.5 for Seattle. The total has accordingly come down two points from 52 to 50.

The Seahawks should be able to run the ball in this game because they’ll finally have Chris Carson healthy again. One of the missing factors in this slump for the Seahawks is that Carson hasn’t been available in each of the three defeats. He picked up an injury against Arizona and missed the remainder of the loss to the Cardinals as well as the trips to Buffalo and Los Angeles.

This offense is always going to belong to Russell Wilson as long as he’s the quarterback, but having Carson on the field gives the Seahawks a running game that opponents have to respect, making it much easier to “let Russ cook.” However, in practice, “letting Russ cook” actually hasn’t been that effective of a strategy for the Seahawks. When Wilson throws for more than 350 yards, the Seahawks are a mere 1-2; when he doesn’t, Seattle is 6-1.

The numbers are clear: the Seahawks need to have a quality running game along with their consistent passing in order to have success. Seattle will have no problem throwing the ball to D.K. Metcalf and Tyler Lockett, but if they’re not getting the job done on the ground, they’ll have a hard time keeping the Eagles from keeping up.

Letting Russ cook might not be working all that well for Seattle, but in Philadelphia, trusting the game in Carson Wentz’s hands has been simply disastrous. The Eagles’ quarterback hasn’t been able to get much of anything going over the past three games, throwing for under 250 yards in each of them. For the year, Wentz has just three games where he’s topped 250 yards, and he’s leading the league in interceptions with 14.

Unlike the Seahawks, the Eagles do have a ground game that they can fall back on, but Philadelphia’s ground attack is the kind that slows the game down, not one that scores touchdowns. In this game, that might be the way to give Philadelphia a chance to keep up with Seattle. The Seahawks’ attack is at its best when it’s scoring 30+ points a game, something Philadelphia hasn’t sniffed all season long. If the Eagles can ride Miles Sanders and keep the clock moving, they’ll have a good chance. If they have to put the game in Wentz’s hands in an effort to keep up with the Seahawks, this won’t end well.

When you never score more than 30 points, you’re going to hit a lot of unders, and that’s what Philadelphia has been doing. The Eagles have gone under the total in each of their past four games and six of their past eight overall, despite never playing a game where the total was higher than 46.5 at kickoff. The under has a long history in this series as well, as the past five matchups have gone under the total.

But Seattle is able to play that game quite well itself. Not only have the Seahawks’ past two contests gone under the total, but they’ve covered the total on each of their past five trips to Philadelphia and in each of their past six matchups with the Eagles. Seattle has also long been at its best in November, covering in seven of its last ten contests in the year’s 11th month.

This could be an ideal situation for the Seahawks, as the weather will resemble something they’re used to in the Pacific Northwest. It’s projected to be cloudy and rainy, with temperatures falling into the mid-40s and wind blowing south at 12 miles per hour.

A low line in a game like this is always a cause for concern, especially when a game looks as simple as this one does. But the reality is that Philadelphia doesn’t have the offense to keep up with Seattle, especially with Carson back on the field. The Seahawks have the more potent offense and a defense that can force Wentz into mistakes, and if Seattle gets a few short fields, it’ll have control of this game.

I think the low spread is something Seattle can handle. Give me the Seahawks. Bet your Eagles vs. Seahawks pick and ALL your sports bets each week at -105 odds instead of the spendy -110 that your book is sapping you with! Making the switch to reduced juice sports betting will save you thousands of dollars over the years! It trumps the heck out of any bonus you can get! Find this sweet offer at BAS Sportsbook!