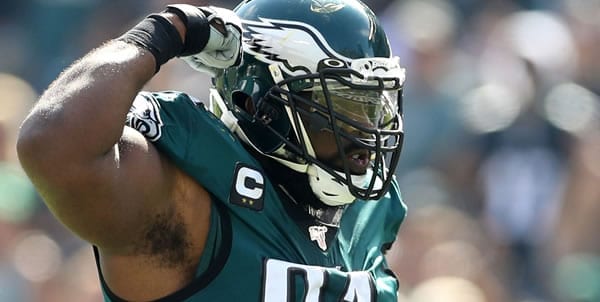 The NFL has treated its fans to superb prime time games over the last month, but this Monday night will not be one of those games. Instead, MNF moves to the city of brotherly love for an NFC East battle between the Giants and Eagles. Sportsbooks are making the Eagles 8½ point favorites and have set the game total at 47. We would like to bet against both of these teams (see the 8-16 combined ATS record), but one of these teams is far more putrid than the other, so the play for Monday Night is to lay the points with the Eagles. Here are three reasons.

The Giants Are Totally Broken

Daniel Jones took over as quarterback in Week 3 and promptly led the 0-2 G-Men to back to back wins and create hope in New York. September and October have come and gone without Jones leading the Giants to their 3rd win. During this eight-game losing streak, they have only covered two spreads, losing by five points while getting six against both the Bears and Lions. New York ranks 25th in points scored and yards per play, but the troubling stats for this week’s game are their 23rd rank in rushing yards and that they have allowed the 12th most sacks. Saquon Barkley has battled injuries much of the year, which is somewhat to blame for his pedestrian 4.0 yards per carry mark. Jones continues to look like a rookie throwing to mediocre receivers, completing only 61% of his passes while tossing 11 interceptions. Jones has only taken one sack over the last two weeks against the Bears and Packers, but he went down 11 times in the prior two games. Look for the Eagles pass rush to dominate the Giant offensive line and bring Jones down multiple times.

Philly’s defense had been playing better until the Dolphins lit them up last week for 37 points and 351 passing yards. The Dolphins scored 23 second-half points to upset the Eagles in Miami, with Ryan Fitzpatrick leading the charge. Miami wore out the Eagle defense, keeping them on the field over 31 minutes, but still managed only 58 rushing yards. Philadelphia’s front 7 is the strength of their team and will win the battle in the trenches against the Giants. They will limit Barkley in the running game, then force Jones to make quick decisions and probably make mistakes. The Eagles secondary had been playing better as they have gotten healthier, until the Dolphin debacle. Philly had allowed an average of 180 yards in the previous five games, so look for them to get back on track this week. The Giants offense has been held under 300 total yards in 6 of their last eight games, look for that stat to move to 7 out of 9 games this week, and New York to score less than 20 points for the 6th time in those nine games this week.

The Eagles Can Score Against New York

Carson Wentz and the Philly offense have been amongst the biggest disappointments in the 2019 NFL. Wentz was a potential MVP candidate on a potential Super Bowl contender, but 12 games in the Eagles are 16th in points scored and 24th in yards per play. They have suffered some injuries, none more impactful than losing Desean Jackson for the season. Jackson was their only receiver that could get on top of a defense, and without him, there is no deep threat. Alshon Jeffery finally got back on the field last week to give Wentz a reliable target on the outside and caught nine balls on 16 targets. Zach Ertz and Dallas Goedert provide a solid tight end tandem, which Wentz will also lean hard on this week. Miles Sanders has taken over control of the backfield and had a season-high 83 yards last week. Sanders should be able to exceed that result this week against New York. Philly’s offensive line is also healthy with right tackle Lane Johnson returning to the lineup last week. Against a weak Giant front 4, the Eagles should win the battle in the trenches when they are on offense also.

The Giants defense is just as bad as the Giant offense. They have allowed the 29th most points in the league, are 26th in passing yards allowed and 25th in sacks. They have only taken the ball away 13 times, and all of this while playing one of the easiest schedules in the league. Opponents are converting 40% of their 3rd downs and 70% of 4th downs on the season. There is no strength in the Giant defense and nothing for the Philly offense to be worried about. Philadelphia should be able to move the ball at will, sustain drives and put points on the board. Look for Wentz to get right this week against the G-Men.

The Intangibles Are With the Eagles

Despite sitting at 5-7, the Eagles are just one game out of first place in the NFC East. This is a team that expected to compete for a Super Bowl, and at least on paper, they still can. They have two games against New York, one against Washington and a week 16 showdown with Dallas. After falling apart last week against the Dolphins, they won’t let up if they get a lead in this one. New York, on the other hand, is playing for nothing. Head coach Pat Shurmur may not be back next year, and the spark that Daniel Jones gave them has long since burnt out. The Giants have lost 6 of their games this year by double digits, and I expect number 7 coming this week. Look for Philly to dominate the game and blow out the Giants.

I don’t like laying more than a touchdown, especially with a team that just lost outright to the Dolphins. However, I do like betting against the dysfunctional Giants, and we have that opportunity. Bet this game and ALL your football and basketball bets at -105 discounted odds (instead of the spendier -110 option you’re likely laying) at the web’s best sports betting site: 5Dimes!