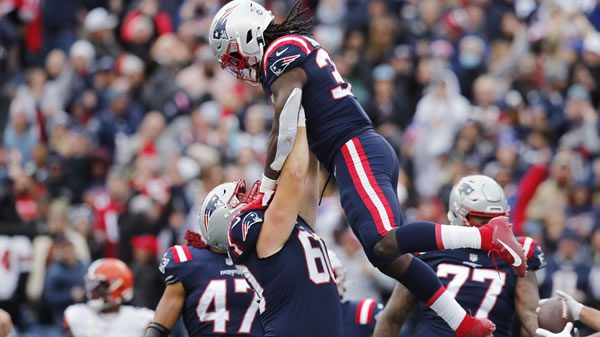 The New England Patriots take on the Atlanta Falcons on Thursday Night Football. Atlanta was cruising along decently, having won three of four games. On Sunday, however, they ran in the Dallas Cowboys buzzsaw and their end-result was their worst showing of the season—an embarrassing 43-3 defeat. Making it worse is they now host an incoming Patriots squad that has really dialed in the right recipe, winning their fourth straight game on Sunday, a rollicking 45-7 win over the Pats. Who can bring home the cover on TNF?

Bad Spot for the Falcons

The Patriots are really rolling now. Within this four-game winning streak are 54 and 45-point outputs. QB Mac Jones has been sharp lately and on Sunday, Jakobi Meyers finally caught his first NFL TD. Even with James White and now Damien Harris (questionable) out, they can still run the ball. On Sunday, it was Rhamondre Stevenson getting it done with 100 yards and two TDs. Hunter Henry is a TD machine as of late at tight end. They’ve been peppered with injuries, but the strength of the system and good coaching helps see them through. It’s a smooth-running offense heading into Thursday Night Football on the short week.

Atlanta had been doing a little better defensively, but only two teams have given up more points this season. They’re pretty bad against the run, which is bad news with the Patriots having so much success in this area with different weapons. In addition, this might not be the best spot for a short week with Atlanta licking their wounds from what was a royal beating on the road last week. Conversely, the Patriots are flying high, going from a 1-3 team that was losing to teams like Miami to a team that has a legit shot at staying in the division race with Buffalo.

MORE PREDICTIONS: BE SURE TO CHECK OUT OUR WEEK 12 COLLEGE FOOTBALL PICKS!

Major Obstacles for the Falcons

Not to besmirch the success the Falcons have had this season, being they could still get back to .500 with a win here, but the offense is a bit of a mess. Matt Ryan can deliver in some windows, but he’s not what he used to be. The run-game is a mere afterthought at this point. They boast of a rising tight end in Kyle Pitts, but with Calvin Ridley out, their weaponry is dicey. The receiving crew is filled with marginal figures like Russell Gage, Tajae Sharpe, and Olamide Zaccheus. Ryan had just a terrible game on Sunday, with Josh Rosen coming in for garbage time, which only further accentuated Atlanta’s miseries on the day.

Just as judging Dallas heading into their monstrous whipping last week based on one really bad week, maybe judging Atlanta too harshly from last week will send us askew. At the same time, they were made to look better than they are perhaps with wins over the Jets, Miami, and New Orleans, with a close loss to Carolina in the mix. Now against the cream of the AFC East crop, things might be a little different.

Not being able to run the ball with any consistency will prevent the Falcons from taking advantage of the weakest part of the New England defense. They are basically reduced to Ryan spraying it around the field, but the lack of a vertical game is pronounced with the Falcons aerial approach. That leaves a New England pass-defense that has been wreaking havoc on opponents to zero in on a challenged and undermanned Atlanta pass-attack.

Pats in a Good Spot on the Road?

It’s a bit of a funky road-trip on the short week, out of conference in a bit of a foreign stadium for most of New England’s players. Still, if you have to come off a short rest on the road, there could be worse spots. New England started the season in rough shape with a lot of moving pieces. Having steadied the ship and now starting to see success, it might not be easy to separate them from this momentum. We see expert game-planning from Belichick and offensive coordinator Josh McDaniels, as they take advantage of what is given them.

New England is adept at taking the main weapons away from teams with limited options. As of now, barring returning personnel and perhaps even then, the Falcons are reduced to Pitts and Cordarrelle Patterson, whose big performances have waned over the course of the season. They have the personnel to push the dicey Atlanta offensive line to its limits. Considering the lack of Matt Ryan’s mobility, he might get forced into mistakes like he was last week, which could result in more chances for the opportunistic New England defense.

The Patriots could end up just being a team showing good signs before reverting back to their place as a non-contender. But even if that’s so, I’m not sure the Falcons still smarting from their low-point of the season can do all that much about it. Not that the Patriots’ offense is brimming with stars, but there are roles and coaching that helps them max out what they have, regardless of the quality of the individual pieces. There aren’t many offenses in football where guys like Rhamondre Stevenson, Brandon Bolden, and Hunter Henry are having big games. I see the Patriots being able to make it work in this spot with a more or less trouble-free win in Atlanta on Thursday. I’ll take the Patriots.

Loot’s Prediction to Cover the Point Spread: I’m betting on the New England Patriots minus 6 points. You can make the Falcons a +25 underdog or the Pats underdog by inserting either into a massive 19-point NFL teaser found at Wagerweb Sportsbook!