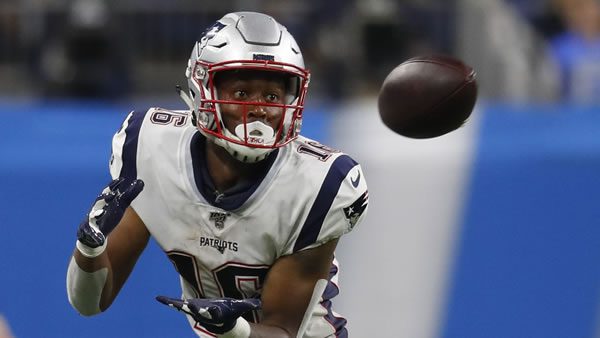 Bill Belichick brings his AFC No.2 seed New England Patriots to Upstate New York to take on their AFC East rival Buffalo Bills on Monday Night Football. The sportsbooks are making the Bills three-point favorites and setting the game at 43.5. Let’s roll with the Patriots to keep this game close and possibly come out with a win. Here is the Handicap!

The Pats Are Red Hot

We all knew that Belichick would have the Patriots back at the top of the league after some period of time. After Week 6, they sat at 2-4, and it looked like the rebuilding plan would probably take a couple of years. As we look forward to week 13, New England has reeled off six straight wins and sits atop the AFC East. Other than a three-point win in Week 8 against the Chargers, New England has won the other five games by at least 18 points, including last week’s domination of the Titans. During the Belichick / Brady era, the Patriots covered spreads at a 60% clip, and bettors getting in front of that train did it at their own peril. Covering spreads has also returned to New England. Belichick’s squad has covered the number in 67% of their 2021 contests, including the six on their current straight-up winning streak. With this line being right at a field goal, the books are saying the Bills are as good as or a little better than the Patriots. We can all hear Belichick telling his team how those six games proved nothing, and they’re still underdogs to a team that has lost half of their last six games. I think until someone knocks this train off of the track, the only side to look at is the Patriots, and getting points makes it all the more attractive.

The Patriots Are Dominating on Both Sides of the Ball

New England’s offense is as efficient as any in the league. Running backs Damien Harris and Rhamondre Stevenson are providing a 1-2 punch that keeps the chains moving. Both are averaging well over 4 yards per carry, with Harris more of a bruiser and Stevenson a little flashier and more of an asset in the passing game. Mac Jones is getting better every week and making a case for Rookie of the Year. He diced up a Titan defense last week that had shut down Mahomes and Stafford over the past month. Jones is completing 70% of his passes and averaging 7.3 yards per attempt. New England will look to keep their offense humming in Buffalo. Offensive Coordinator Josh McDaniels will start out conservative and make the Bills prove they can stop Harris and Stevenson. McDaniels will also test out the Bills secondary, which will be without All-Pro cornerback Tre’Davious White who tore his ACL last week. McDaniels has proven he will be patient with the offense and keep Jones in situations that he can succeed in. McDaniels won’t get impatient if things start slow and put Jones in a high-risk situation as long as the game is close.

The Pats defense affords McDaniels that patience. New England allows the fewest points per game of any team in the league. They have only allowed 24 points in their last four games, despite a lot of garbage time for opposing offenses. Tennessee put up over 200 rushing yards against the Pats, but Belichick’s defense has been stingy against the run for most of the year. Matt Judon has emerged as one of the premier pass rushers in the league, notching 11 ½ sacks through 12 games. He needs to be disruptive again this week and not allow Josh Allen to get comfortable. Although Buffalo has the capability to be an explosive offense, it’s hard to imagine the game getting away from the Pat’s defense. They haven’t allowed more than 30 points in regulation time this season, and it probably won’t happen this week.

Bet this game and ALL your point spread bets at -105 at BAS!

Buffalo Is Battling Through a Slump

The Bills are not firing on all cylinders as they welcome the Pats. As stated above, they have lost 3 of their last 6, including a loss to the Jaguars where they only put up 6 points, then fell to the Colts while scoring only 15 points. They got back on the right track last week in New Orleans, scoring 31 in a blow-out Thanksgiving Day victory, moving the ball both on the ground and in the air. Buffalo has been trying to run the ball more lately, but they have a tendency to abandon the run if it doesn’t go well early or they get behind. The biggest issue the Bills have during their slump is turnovers, giving the ball away 12 times over the last six games, including 8 Josh Allen interceptions. The Bills looked like they took a step in the right direction last week, but I expect a step back this week. Buffalo will struggle to move the ball on the ground against New England, then put the team on Allen’s back. Allen has not been up that challenge in 2021, especially the latter half of the year.

The Bills defense will be the biggest challenge Jones and the Pats offense has had during their hot streak. Buffalo only allows 17 points per game and matches up reasonably well with New England. Buffalo will have to stop the Patriot rushing attack. They have mostly held up against the run, although the strong offensive lines of the Colts and Titans had their way with the Bills. New England’s O-line will cause problems for Bills and could force a Safety to have to drop in the box to stop the run. This would open up opportunities for big plays on the back end as Buffalo gets acclimated to playing without White. I don’t think the Bills will get dominated like the Pats have been dominating opponents, but they won’t pitch a shutout or hold New England to single digits.

Take the Points with the Pats

If New England wins this game, you won’t be able to get points with the Patriots again this year. Take the Patriots and the points on Monday Night Football. Note: Don’t forget to check out Joe’s Monday NBA picks!