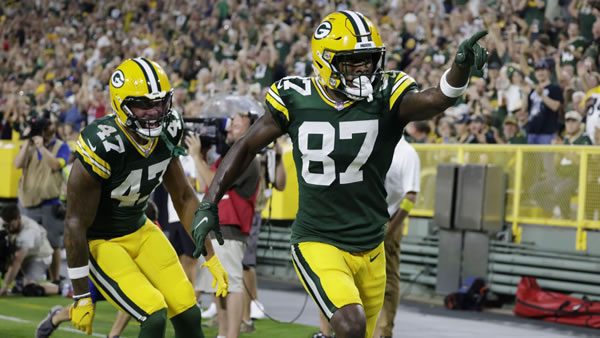 Aaron Rodgers took down Tom Brady in a heavyweight QB brawl last week, and now the Packers will face another legendary foe in the form of Bill Belichick. The New England Patriots will face the Packers in Lambeau this Sunday, and this matchup is fresh with just three previous meetings in the Rodgers era. Both offenses have struggled out of the gates, and the Patriots are now most likely without QB Mac Jones after he suffered a high ankle sprain at the end of last week’s game. New England is still waiting for word on Jones’ treatment options, and he is officially listed as day-to-day, but it is hard to imagine any scenario where he suits up on Sunday. Brian Hoyer will likely get the start, and the veteran has a 16-23 career record as a starter. Belichick has routinely found ways to confuse and frustrate opposing quarterbacks over his hall-of-fame coaching career, but Aaron Rodgers is arguably the hardest QB to successfully scheme against.

New England is winless against the spread in their last five overall and also 0-5 ATS in the last five on the road. Conversely, Green Bay is 8-2 against the spread in their last ten at Lambeau Field, and they have a nice 14-6 ATS mark in the last 20 games overall. The Under has hit in each of the last four Green Bay games overall, but the Over is 4-0 in the last four when the Pack plays an opponent with a losing record. The Under has paid in six of the last eight when New England is on the road. With both offenses ranked outside the top-25 in points scored, you might think the Under is the way to go this week, but a relatively small total has encouraged 63% of the public bets to come in on the Over so far. About 55% of the public money is on Green Bay at -10.5, and this line is bouncing around a bit with the opening line at 9.5 points, and you can find New England at +11 at certain sportsbooks.

New England has had no troubles moving the ball as they enter the week ranked 10th in total yards per game, but they have committed the second-most turnovers, and Mac Jones is tied for the league lead in interceptions with five. Without those miscues, the Patriots would undoubtedly be averaging more than their current 16.7 points per game. The running game is 12th in the league, with Damien Harris and Rhamondre Stevenson both north of 4.5 yards per carry. That duo has seen a near 50-50 split in carries through three games, and they will get to run against Green Bay’s 18th-ranked run defense. Brian Hoyer has always played the role of a game manager, so this running game will have to do the heavy lifting for New England if they want to stay in this game. Davante Parker has only six catches on the season, but he is the big play threat in this passing game and is averaging 27.5 yards per reception. Nelson Agholor and Jakobi Meyers have been serviceable targets, but New England has just one WR touchdown on the season, and the homerun play has been decidedly absent from this offense. Outside of the 36 points allowed to Baltimore last week, the Pats’ defense has been stout with the 9th-ranked passing defense and the 11th-fewest total yards allowed. Deatrich Wise Jr. has four of the team’s nine sacks thus far, and while David Bakhtiari has returned to action for Green Bay, the Packers are 23rd in sacks allowed and are again shuffling their line with C Josh Meyers listed as questionable for Sunday.

Replacing Davante Adams was something the Packers knew they couldn’t do with one WR. Perhaps that is why they didn’t make a big free-agent signing or move up to take a high-profile receiver in the draft, but this offense is still figuring out life without a #1 playmaker. Green Bay’s passing game is ranked 19th at 228 yards per game, and only Randall Cobb and Sammy Watkins are averaging more than ten yards per catch. Romeo Doubs has shown some chemistry with Rodgers and leads the team with 14 catches and 137 yards, but this is suddenly a grind-it-out passing game, something we are not used to seeing in Green Bay. Aaron Jones is the best playmaker on this offense, and he averages 6.8 yards per carry. AJ Dillon leads the backfield in total touches and is tasked with carrying the ball inside while Jones has been working the edges. Both are alive in the passing game with 17 catches between them, and they should be the focal point for the offense this weekend, with New England ranked 20th in rushing defense. The Green Bay defense earned the game ball for holding down Brady and the Bucs last week, and they have given up just 24 points over the last two weeks after letting Justin Jefferson run wild in Week 1. Green Bay is top-10 in total yards allowed and passing defense and giving up just 15 points per game. A typically ball-hungry secondary has produced just one interception through three games, but teams have found it difficult to sustain drives, and Green Bay ranks 2nd in third-down defense, allowing a conversion just 22% of the time.

Swallowing the double-digit line against Chicago in Week 2 was a somewhat easy call given the offensive limitations of the Bears offense, and it feels like a similar situation this week with another limited offense coming to Lambeau. Hoyer is a capable backup who fully understands the Belichick offense, but it is hard to see how New England is going to get enough points on the board. Tampa has a top-end defense, so don’t overvalue Green Bay going cold for three-quarters last week. If anything, they proved they have a top-end defense of their own, and they don’t have to face Tom Brady this Sunday. Rodgers will continue to develop his raw receiving group, and Matt LaFleur will find spots for Aaron Jones to do his thing. This is a relatively comfortable game for Green Bay throughout, and they get the 26-13 win.

Pick to Cover the Spread: Green Bay. Bet your Week 4 NFL picks for FREE by taking advantage of a 100% real cash bonus up to $500 when you enter bonus code PREDICTEM on the special offers page at Everygame Sportsbook! They are the oldest and most trusted sportsbook on the web! (In business since 1983 – Formerly Intertops).