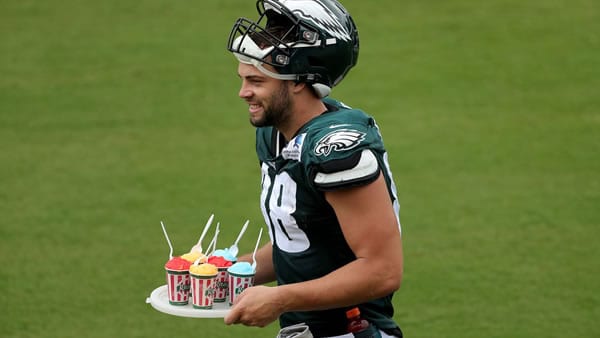 Point Spread: NO +1/PHI -1 (BetNow - They’ll match you dollar for dollar with a 100% REAL CASH bonus on your first deposit up to $1000! The BEST sportsbook bonus from a legit sportsbook!)

The New Orleans Saints come to the City of Brotherly Love on Sunday for a Week 11 NFC showdown with the Philadelphia Eagles. On Sunday, the Saints came out on the wrong end of a painful loss when their two-point conversion failed late, and they fell to the Titans, 23-21. It was a game where the Saints were often their worst enemy. At 5-4, they now pick up the pieces to take on the Eagles on the road. On Sunday, the Eagles were able to go into Mile High and upend the Broncos, 30-13. The Philly defense was able to make a nice contribution to the team effort, with the Eagles’ ground-game doing a lot of damage for the big win.

Are the Saints Starting to Slip?

Consecutive losses to the Falcons and then the Titans last week have sullied a 5-2 start, and you wonder if some of the Saints’ issues aren’t starting to show a little bit. Injuries have taken their toll. Their offensive line, secondary, and other areas are banged up. Alvin Kamara missed the last game. And with all the money they paid Taysom Hill, it seems odd that they’re going with forgotten Trevor Siemian at quarterback. Even when Kamara is in there, the offense is hard to put a finger on.

The Saints’ receiving crew is a bit of a mish-mosh. There are some talented players like Deonte Harris, Tre’Quan Smith, and Marquez Callaway. Tight end Adam Trautman is pretty good, though an inexplicable false-start helped ruin a late two-point conversion on Sunday. It’s just a bit of a slop-fest from week to week, with no one really taking the lead. And Kamara has even been less-dynamic in this offense for some reason. For New Orleans, the shine is definitely off.

Over the last several weeks, the New Orleans defense has started to subtly ebb. The lynchpin of their early success, we see opposing offenses connecting aerially with more effectiveness in recent weeks. They’re not getting to the opposing quarterback with the same regularity. The run-stop remains formidable, and they’re hoping against a Philly team that gets by with a heavy dose of ground-game that maybe they can see their “D” start to gain control of games again.

Eagles Back on Track?

A win over a Denver team that hasn’t been bankable since their 3-0 start might not mean a ton. The dominance in a tough road game, however, underscored what the Eagles can do when they’re clicking. Jalen Hurts is a dual-threat QB, even if his legs are the bigger threat than his arm. But he has a rising lead receiver in DeVonta Smith, who caught a TD on Sunday, along with interesting role receivers who can chip in and a good tight end in Dallas Goedert (questionable). It’s an offense that is forming an identity.

The Philly offensive spike on Sunday was a bit unexpected in light of playing a good Denver defense on the road. At their worst, it can be a bit of a grind. Without Miles Sanders, the run-game is a bit indecipherable, with Jordan Howard and Boston Scott taking the lead for the time being. We’ll see if that goes off without a hitch against the New Orleans run defense. And the aerial game is not something that has fired with any kind of regularity for this offense. This could be a spot to unfurl that part of their approach, but we’ve seen the Eagles have trouble getting that part of their game moving this season.

Regardless of recent spurts in games, these are offenses that generally struggle to gain a foothold. While the New Orleans defense has slipped a bit in recent weeks, they are still above average, and the Eagles’ defense has been below-average. The Eagles run a lot, and the Saints have the top rushing defense in the league. So you see the story start to shake out a little in the Saints’ favor, perhaps, but I wouldn’t be so sure. On the other side of that coin is a Saints’ aerial offense that is among the worst in the league.

These NFC road spots can be hard on a team accustomed to a dome. It’s early to say, but there could be some weather, which only feeds into the Eagles’ hands. If they can keep this close, peck, and poke and prevent the Saints from making any big splash plays, they might have this game right where they want it. While it’s suspect that the Eagles can replicate last week’s offensive success, even if it came on the road against a good defense, this also doesn’t seem like an ideal spot to see a New Orleans offensive surge.

This has the potential to get ugly, which might help the Eagles, who desire a bit of slog. Being that they didn’t have many offensive stars, to begin with, missing a few people might not hurt a Philly offense that at least has some bright spots. Without Kamara, the bright spots on the Saints’ offense are few, save the occasional spurt from a random receiver, a bit of help from Mark Ingram, or maybe a QB making a big play. None of those things are bankable, and in this spot, in an almost anything-goes scenario, I’m inclined to take the home team. I’ll take the Eagles in this one.

Loot’s Prediction to Cover the Point Spread: I’m betting on the Philadelphia Eagles minus 1 point. Bet your Saints vs. Eagles pick and ALL your week 11 NFL predictions for FREE by taking advantage of a 100% REAL CASH bonus on your first deposit of $100 to $300 at MyBookie Sportsbook! (Must use bonus code PREDICT100 in order to qualify for the special bonus). Click here to sign up now!