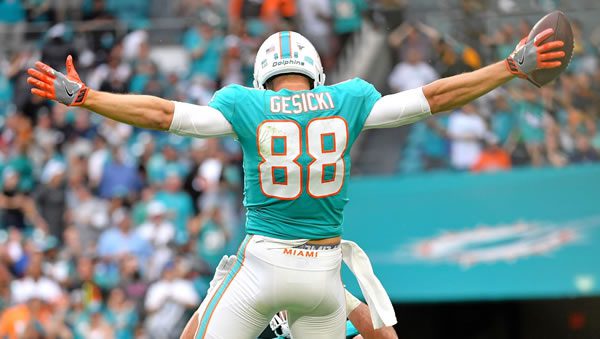 Two teams that started slowly this season but are playing better ball as of late meet when the Dolphins host the Giants Sunday afternoon down in South Florida. Miami started 1-7 this season; it now owns a four-game winning streak. New York started 1-5 this season; it’s 3-2 its last five times out.

The Dolphins are only favored by home-field advantage for this one; which way are we going with our free NFL betting pick?

The Week 13 NFL betting odds opened the Dolphins as 2.5-point favorites over the Giants, with an over/under of right around 43.5. Early betting action then bumped Miami to -3 and dropped that total two points to 41.5.

New York is 3-2 SU and 4-1 ATS over its last five games after beating Philadelphia at home last Sunday 13-7. The Giants, playing as four-point home dogs against an Eagles team that looked like it was hot, led 3-0 at the half, then scored the first touchdown out of the locker room to go up 10-0. New York let Philly get within 10-7 early in the fourth quarter but added a field goal and hung on from there for the victory.
The Giants were one of five home dogs to win outright last week.

New York actually got out-gained by the Eagles 332-264 and out-rushed 208-70 but won the turnover battle 4-0.
The Giants have now been out-gained by each of their last four opponents and out-rushed by three of their last four foes. And yet, they’ve won three of their last five games.
At 4-7 overall, New York trails first-place Dallas by three games in the NFC East, but it’s also only one game - and five other teams - behind Washington in the battle for the No. 7 spot in the NFC playoff standings.

Miami, meanwhile, is 4-0 both SU and ATS its last four times out after beating Carolina at home last Sunday 33-10. The Dolphins returned a blocked punt for a touchdown six minutes into the game and led 21-10 at the half. Miami then drove its opening possession of the second half 80 yards to a touchdown and pulled away from there, taking advantage of a Panthers team basically without a quarterback.

The Dolphins out-gained Carolina 315-198, dominated time of possession by a 38:22 split, and won the turnover battle 3-1.
So after starting this season 1-7, Miami is now 5-7. The Dolphins trail division-leading New England by three games in the AFC East, but they’re also only a game and a half with five other teams - behind the Chargers in the battle for the No. 7 spot in the AFC.
These two teams last met two seasons ago, a 36-20 Giants home win. Eli Manning quarterbacked New York that day against Ryan Fitzpatrick for Miami.

If this were Week 1 of this season, we’d peg Miami as a six- or seven-point favorite over the Giants. The Dolphins began this season with more promise than New York. What’s changed since then? Really, not much, but the line on this game is certainly friendlier toward Miami than it would have been back in September. Also, Miami’s won four in a row while the Giants are one of those outfits that’s up one week, down the the next. And coming off that rivalry win over the Eagles last week makes New York a good candidate for a letdown this week. We like the Dolphins here. Move the line 20 points either way by taking advantage of the enormous 20 point football teasers at Wagerweb Sportsbook!