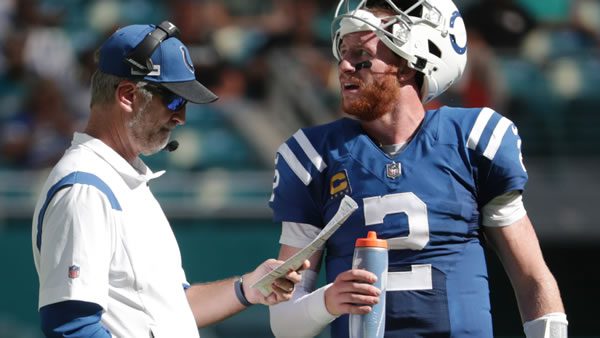 The New York Jets come to Lucas Oil Stadium for a Thursday Night Football showdown with the Indianapolis Colts. This AFC battle features two teams who had very different experiences on Sunday. The Jets overcame a rough start and an 11-point fourth-quarter deficit to storm back to beat the Bengals, 34-31. Meanwhile, the Colts squandered a 14-0 start and scored a late touchdown to go to overtime before losing in extra time to the Titans, ironically with the same score—34-31. Who can get it done in Indy on TNF?

White: A Breath of Fresh Air?

After throwing two early picks, fill-in Jets’ QB Mike White was spraying the ball all over the field. Granted, a 405-yard performance against a still not ready for primetime Cincy “D” does not a career make, but the Jets will take hope in any form. Suddenly, we saw him connecting with all the available Jets’ weaponry, with Jamison Crowder, Elijah Moore, Ty Johnson, Denel Mims, Keelan Cole, and Tyler Kroft coming into play. He connected really well with RB Michael Carter, with the young back catching nine balls on little dump-offs, as he confirmed the connection made with White when he came in to relieve Wilson the previous week.

An offense moving as well as this helps cover up some of the Jets’ drawbacks. Suddenly, a beleaguered offensive line was less of an issue. With the air game moving well, the run-game got unfurled for a change. The Jets’ defense, which was hardly great, was still spared from not being on the field and avoided getting run over. Perhaps enlivened by the performance on the offensive side of the ball, they were able to show some late resistance and help stage the big comeback win.

While the Colts have certainly shown greater spark over the last handful of weeks, they are still readily exploitable defensively. And through the air, it can get ugly sometimes. The Jets would like to get Carter going on the ground again this week, but for the most part, the formula for success consisted of White spraying the ball around to various guys. And there may be no stars among the lot, like AJ Brown, who victimized Indy last week, but we saw a lot of variety to White’s attack, with a lot of different types of throws to a lot of different guys.

What Indy Can Do This Week

A highly-imperfect team who looks to be taking an overall pronounced step backward this season, the Colts are still dangerous. It’s hard not to notice the growing comfort and form of QB Carson Wentz in this offense, as he gets a little more out of those around him. There have been miscues, and there was an ugly one on Sunday that cost them in the form of an ugly pick-six. With the 2021 version of Wentz, those little mini-collapses within a game are just something that’s on the table. Still, getting TY Hilton back adds another weapon. Michael Pittman has been stepping up more in recent weeks, with RB Jonathan Taylor adding a dual-threat appeal with his legs and pass-catching ability. The O-line has also started living up to its billing more in recent weeks.

A home spot against the Jets would, on the surface, appear to be a spot for the Indy offense to shine. The short week coming off the overtime divisional grind against Tennessee isn’t ideal. With Parris Campbell on IR, it’s hard for this offense to get really vertical at times. Getting Taylor going as strictly a running threat can be elusive. But it is the Jets, a readily-exploitable bunch that might not be terrible all the time but is still miles from even being average. Nevertheless, the Jets’ defense managed some big plays on Sunday and chipped in on the big team effort. For them, that counts for progress.

It’s easy to picture a semi-continuation of what we’ve been seeing from each team. And with dicey defensive units with an offense that can make some things happen, another high-scoring game could be in the cards. At the same time, while neither team is near .500, it would seem the Colts have a better track record this season with seeing their offense surface on a given week. White thrived in a one-game window. And if he maintains this rate of throwing a pick every quarter or quarter-and-a-half, it’s going to be make it really tough. Wentz has made some high-profile mistakes, but with White’s turnovers and mistakes being a team-wide problem, it’s another point to consider.

There is something to be said for steadiness, even if it’s in an imperfect package. The Colts aren’t in any position to turn their nose up at the Jets with one more win on the season. One can see the Jets’ storyline for their optimists this week. They caught some fire with this White, and after beating a better team last week, they’re getting points against a worse team this week. And sure, that might come to pass. But we’ve also seen just as many bad teams get briefly hot with a new face under center, only to rapidly revert to prior form.

Last week may have made the Colts look a little worse than they are, while the Jets were painted in a bit of a flattering light. The Indy “D” didn’t look good last week, but overall, they’re more solid and well-rounded. The Indy offense has more reliable levels of balance. White looms as an X-factor, but I see these overall and more-complete team strengths of the Colts manifesting in this game, as they cruise over the finish line with the win and the cover at home this Thursday.

Loot’s Prediction to Cover the Point Spread: I’m betting on the Indianapolis Colts minus points. Bet your Week 9 NFL picks for FREE by taking advantage of a 100% REAL CASH bonus on your first deposit of $100 to $300 at MyBookie Sportsbook! (Must use bonus code PREDICT100 when registering for a betting account).