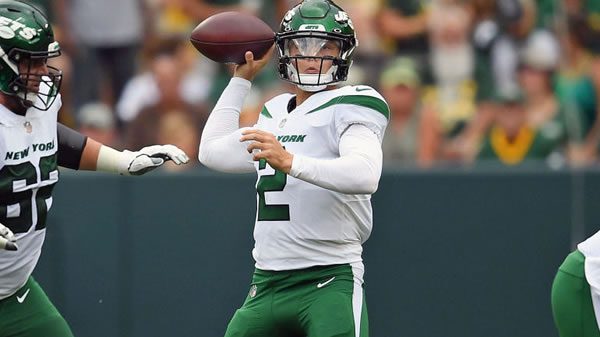 The Jets face their fourth and final AFC North opponent after getting drilled by both Baltimore and Cincinnati and taking advantage of Cleveland’s incompetence down the stretch to steal a win. New York wasn’t expected to challenge for a playoff spot this season anyway, especially without Zach Wilson on the field, but the Jets are about to take themselves pretty much out of the running before the season is even a quarter of the way over if they don’t get a win here. With six games still to come against the Bills, Dolphins, and a Patriots team they haven’t beaten since 2015, a 1-3 start before they even get into division play would basically spell the end for the Jets. Pittsburgh’s situation isn’t a lot better. The Steelers have also gone 1-2 to start the season, and they’ve done so in a way that makes it clear that the offense isn’t going to be doing much of anything this year. The Steelers continue to muddle through with Mitchell Trubisky, who has made it rather obvious that he isn’t the solution in western Pennsylvania. However, Pittsburgh isn’t ready to turn the keys over to Kenny Pickett just yet, so the Steelers will continue to ride with Trubisky for the foreseeable future. That’s probably not a great sign for Pittsburgh’s short-term future, but it’s probably a great sign for under bettors moving forward.

How the Public is Betting the New York/Pittsburgh Game

Are the Jets going to bring Zach Wilson back for this game? Wilson might be ready to make his season debut after having to recover from a knee injury suffered in the preseason, but whether he’ll be able to finish the game upright is another question. With the Jets having four tackles on the shelf, they’re going to have a hard time dealing with pressure if the Steelers choose to get after them often. If they’re going to get a win here, the Jets will have to throw the ball well. New York has been an air-it-out team in 2022, which isn’t really the way that you want to attack Pittsburgh’s defense. However, the Jets simply aren’t going to develop a ground game overnight, even against a defense as weak against the run as Pittsburgh is. With the Jets ranking 26th against the run, they really have no choice but to put the ball in Wilson’s hands and let him try to find his targets. If the Jets can keep him upright, he should be able to find some success.

The Steelers already knew that this would be a tough transition from Ben Roethlisberger to his successor, but this has been weak even by their lowered expectations. The Steelers rank 31st in the league in total yards, managing a mere 272.7 per game. They don’t run the ball particularly well, averaging 90 yards per game, and the passing game has been even worse. If not for Cincinnati turning the ball over five times in Week 1, the Steelers would very likely be an 0-3 team. Trubisky’s job is basically to not lose the game rather than to win it, as the Steelers believe that if they can keep the score down, they can steal a win at the end of the contest. The Steelers don’t really have much other than waiting for the other team to blow itself up as the Bengals did, and when it doesn’t happen, Pittsburgh’s really struggled to get much of anything going, scoring 20 or less in regulation in all three games that it has played. The Steelers are efficient when they get opportunities, as they rank 18th in total points scored despite their offensive woes, but that isn’t going to work against better offenses. They need more out of the attack, which begs the question of when they will turn to Kenny Pickett.

These teams don’t face off a lot, but when they do, there are few points to be had. The under has cashed in five straight meetings, and these matchups usually favor the home team. The host is 5-1 ATS in the past six meetings between the teams, although that’s also a bit skewed for this year’s teams because the previous Steelers had Ben Roethlisberger, and this group doesn’t really have a quarterback. The Jets have been pretty poor on the road for a while, going 16-33-2 ATS in their last 51 road games. The Steelers, on the other hand, have been solid at what used to be Heinz Field, covering in three of four and earning a push.

It’s set to be cloudy at kickoff in Pittsburgh, but that’s a lot better than the rain in the forecast for Saturday. On Sunday, temperatures will sit at 65 degrees with just a 25% chance of rain. Kicking might be a challenge, as wind gusts of up to 17 miles per hour in an already tough stadium are expected.

The Steelers are getting a little too much credit based on what they have shown so far. Pittsburgh was fortunate to beat Cincinnati because the Bengals tossed that game away with interceptions. The Steelers haven’t gone out and taken a win from someone without it getting handed to them this year. The same is true for the Jets, but they should be able to move the ball in the air with Wilson returning. I like New York and the points.