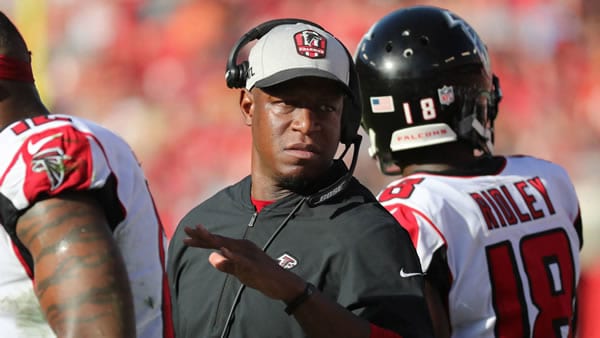 In an event that was long overdue, the Atlanta Falcons finally fired Head Coach Dan Quinn and General Manager Thomas Dimitroff. The move came just hours after the Falcons lost their 5th straight game to open the season in a 23-16 defeat to the Panthers. As many can remember, the Falcons blew near 20 point leads in two consecutive games against Dallas and Chicago. Both of those games had horrible clock management from the Falcons coaching staff and questionable calls down the stretch. Now the Falcons will have the chance to rid themselves from the parasitic coaching of Quinn under interim Head Coach Raheem Morris as they attempt to salvage some dignity for the remainder of the year.

On Sunday, the Falcons will take to the road to meet the Minnesota Vikings at U.S Bank Stadium. The Vikings have been one of the bigger surprise stories in the NFL this season and not in a good way. In fact, Minnesota performed their best Atlanta choke job impression last Sunday night blowing a 13-0 half-time lead and allowing the Seahawks to come from behind in the closing seconds in a 27-26 loss. The defeat moved Minnesota to just 1-4 SU on the season and dead last in the NFC North where many people expected them to challenge the Packers again for the division crown. Now Head Coach Mike Zimmer is feeling some pressure in a needed victory scenario as the Vikings will be slight 3.5 point favorites over the winless Falcons.

In Sunday night’s loss to the Seahawks, star running back Dalvin Cook went down with a groin injury that kept him out of the latter part of the game. Cook underwent an MRI on Monday and while the results did not show any significant damage, the star tailbacks status for this week’s match-up against the Falcons is in jeopardy. Luckily, Minnesota has one of the best handcuffs in the league in running back Alexander Mattison. The Vikings did not skip a beat when Cook went down in their offensive approach as Mattison had 20 carries for 112 yards and caught 3 passes for 24 yards. Therefore even if Cook is unable to go as expected, Mattison should still give the Vikings the elite rushing talent they focus the offense around.

In some aspects, it is puzzling to see the Vikings struggle so significantly in terms of wins. The defense has been solid and the offense has not been “bad” per say. The problems ultimately come down to turnovers and the bulk of that responsibility lies with quarterback Kirk Cousins. Cousins has tossed 7 picks this season and they have come at the least opportune times. In last week’s loss to the Seahawks, Cousins threw an interception and fumbled the ball away on consecutive drives which are mistakes that just can’t happen in close games. The good news for Vikings fans is that this week’s match-up against Atlanta will be the perfect opportunity for Cousins to get back on track. The Falcons pass defense is among the worst in the NFL in allowing uncontested targets in the passing game which should help Cousins reestablish some confidence. I am cautiously optimistic that both receivers Adam Theilen and Justin Jefferson can have big games this week

For the Falcons, it’s hard to know how this team will respond to the coaching change this week. We have seen some similar moves ignite teams’ motivation in the past. While unsure of what to expect, one thing is certain and that is Atlanta must play better on both sides of the ball. Despite having an offense loaded with talent, the Falcons have been held to 16 points in two consecutive games. WR Julio Jones has been banged up but that’s not an excuse when you look at the stats that WR Calvin Ridley is producing. Even last week, RB Todd Gurley had one of his best games in recent memory. Yet the Falcons continue to have little to show for their efforts and that fact alone is troubling against a pretty solid Vikings defense in week 6.

Jay’s Pick to Cover the Point Spread: Despite the struggles, the Vikings are still a solid football team and this match-up will be stylistically difficult for Atlanta to handle. As a result, I am backing Minnesota -3.5