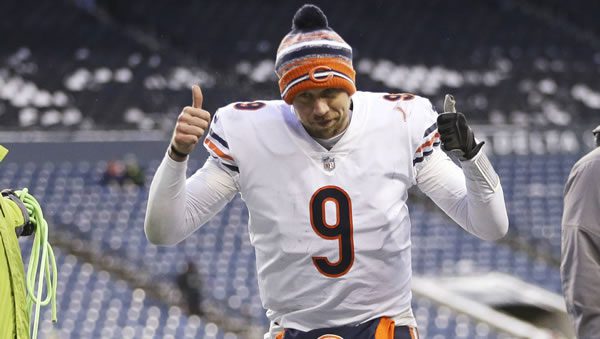 Two teams playing for brighter futures, shall we say, meet when the 5-10 Bears host the 4-11 Giants Sunday afternoon at Soldier Field. Both these teams are missing their starting quarterbacks, and both may soon be looking for new head coaches. But we found a couple of angles to play for this game with our free NFL betting pick.

The Week 17 NFL betting odds opened the Bears as six-point home favorites over the Giants, with an over/under of right around 38. Early betting action was then holding both those figures pretty steady.

New York lugs a four-game losing skid both SU and ATS into Sunday after falling at Philadelphia last week 34-10. The Giants, with rookie quarterback Jake Fromm making his first career NFL start, played the Eagles to an ugly 3-3 tie into halftime. But NY then gave up the first 31 points of the second half and whiffed ATS as an 11-point dog.

New York has now been out-gained by each of its last eight opponents and out-rushed by five of its last six foes. It’s also scored a total of just 69 points over its last six games.

At 4-11 overall, the Giants are playing out the string on a lost season and will play under their season wins over/under, which was seven.

Chicago, meanwhile, just snapped a three-game losing skid with a come-from-behind 25-24 victory in the snow at Seattle last week. The Bears, with veteran Nick Foles making the start at QB, trailed 17-7 at the half and 24-14 through three quarters. But they then scored twice in the last ten minutes and connected on a 2-point conversion with a minute to go for the outright win as seven-point dogs.

The Bears have actually out-gained five of their last seven opponents; unfortunately, they also posted a -10 turnover ratio over that span.

At 5-10 overall, Chicago is also playing out the string this season and will also played under its wins O/U, which was 7.5.

These teams have met each of the last three seasons; New York won 30-27 in overtime in 2018, while Chicago won 19-14 in 2019 and 17-13 last season. Mitch Trubisky quarterbacked the Bears to that victory last year against Danny Jones for the Giants. Neither of them will play in this game.

Chicago was favored by 4.5 points also at home for last year’s game, which played under a total of 43, as the teams combined for just 599 yards of total offense.

The Under is 9-5-1 in Giants games this season, which are averaging 41 total points.

The Under is 9-6 in Bears games this season, which are averaging 43 points.

It looks like Foles will get another start here for Chicago, and he gets our check-mark in the quarterback comparison. Also, the Bears’ defense will be the best unit on the field Sunday. Now, normally we’d consider Chicago a good candidate for a letdown in this spot, following the come-from-behind effort last week, but New York is just a terrible team right now, unworthy of a bet. We like the Bears here. Did you know… You can make the Bears a 2-touchdown +14 underdog by placing them into a massive 20-point NFL teaser only found at Wagerweb?