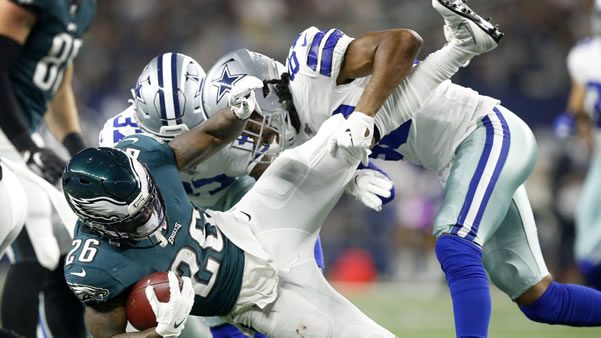 Takeaways From Week 1 and 2

The Eagles looked like an above-average team against the Falcons. They were my top play in Week 2 and got beat after dominating the first half vs. the Niners. Razzle dazzle at the goal line didn’t work, and the team seemingly went downhill after the occurrence. Philly’s skill players are excellent. They possess speed across the board and should create issues against a sub-par Cowboys defense that looked decent last week. The fact that they only put up 11 points last week was baffling. This is a team that will continue to get better every week. If they can stay healthy, I expect them to be a surprisingly strong playoff team.

The Cowboys offensive line looks great. The Ezekiel Elliott/Tony Pollard combination is going to be one of the best as long as the line stays healthy. The Eagles defense looks better than expected, but Dallas will be able to move the ball against them.

After watching the four games involving these teams, it projects that both teams will be able to move the ball well against each other. The total currently sits at 52, which is very attainable. Dallas is now 6th in the NFL in plays run at 68.5, which is in line with their pace last season when they were 2nd in the NFL in offensive plays at 69.6 per game. When betting totals, you always want to check how many seconds per play and plays per game an offense runs.

The Eagles run at an average pace but have big-play ability, plus-speed wide receivers, and an excellent, pass-catching tight end. They also possess a running back in Miles Sanders, who has breakaway speed and is one of a very small handful of running backs that can break off chunk yardage.

How the Public is Betting the Eagles/Cowboys Game

The general betting public is expecting the game to go over the lofty 52-point total to the tune of 61%. When it comes to general consensus, it’s never a bad thing to be on the opposite side of the public, but they may have it right in this matchup as both teams possess plus offenses.
The Cowboys are receiving 60% of the betting action on the -4 spread. For those not familiar with NFL key numbers, a very high percentage of NFL games end with a final score margin of 3 and 4. The bookies have conveniently given themselves both figures.

The home team has won this matchup five games in a row. In 2020, Dallas won at home 37-17, and they lost @Philadelphia 23-9. The teams split in 2019. Dallas took both meetings in 2018, but this is all fairly irrelevant because of the QB change from Carson Wentz to Jalen Hurts, the emergence of Miles Sanders, and a whole new set of wide receivers that are way better/faster than the squad they’ve had over the past few years.

Cowboys: WR Amari Cooper is questionable (as of Thurs) with bruised ribs. It’d be a giant hit if he was to miss as the Pokes are already down a starting WR in Michael Gallup. An already weak defense is likely to lose another this week as LB Keanu Neal has been placed on the reserve/COVID-19 list. Dallas is expected to get Randy Gregory back from the covid list.

Find out what the pros playing this week >>>

Weather conditions are expected to be 84 degrees and overcast.

This game is a classic example of a team that didn’t look so hot last week playing against a public darling and not getting the respect they deserve. As you’ve probably heard, the Dallas Cowboys are considered to be “America’s Team.” Oddsmakers are aware of this and conveniently use this psychology against bettors in their favor. Just look at their spread record over their last eight games where they’ve been installed as a favorite: They’re 1-7 against the spread!

Not always, but the favorite on Monday Night Football usually sees a slight bump (inflated spread) because oddsmakers know the public loves to bet favorites. With it being the only game, the betting handle really piles up. I don’t have the data, but it’d be real interesting to see Monday Night Football favorites have fared over the past 20 years. I’d be it’s a losing proposition.

Having the Cowboys on MNF vs. a team that didn’t play well last week is a bookmaker’s dream. They get a team they know people are going to bet, so they are able to inflate the spread, giving themselves a nice value on the underdog. I make this game as a pickem. Most will believe this is a bit aggressive (I agree), but I’ve watched this Philly team and see their upside. I am a bit concerned with the losses of Brandon Brooks/Brandon Graham, but I still think there’s plenty of meat left on the bone here. Especially since I’m still of the opinion that Dallas’s defense is below average.

If you’re not familiar with NFL key numbers, you should be. Key numbers are common final score margins. Two of the most common key numbers in professional football are 3 and 4. The books have conveniently take BOTH for themselves here, and I expect them to grab the full 4 as I predict this spread to hit 4.5 by game time.

I don’t want to make it sound like I think the Eagles are going to crush the Cowboys. Dallas is good too, but their defense is very vulnerable. On MNF, they’ll be faced with trying to defend a dual-threat quarterback with a good arm, above-average running back, speedy wide receivers, and a sneaky-good tight end in Dallas Goedert.

The handle on this game is going to be huge. This is one game the books aren’t going to let the public win.

I’m all over the Philadelphia Eagles at +4. I’d recommend waiting to place your bet until around Saturday when the public (squares) have had a chance to make some bets. Timing is essential here, as I believe once sharp bettors/wiseguys believe the line has gone up as much as it will, they’ll pop in and bang the Eagles line, which will send it back down to 4 or 3.5. Betting trends and pace point to the game being high scoring, but at 52, there’s not much value left, so I’ll take a pass on the total. Good luck! Double your bang on tonight’s game by taking advantage of a 100% real cash bonus on your first deposit of $100 to $1000 at Betnow Sportsbook!