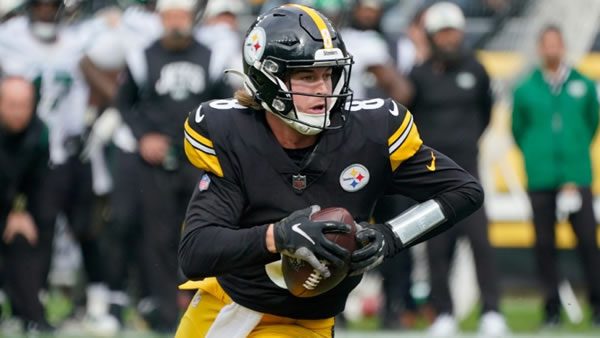 Point Spread: PIT +14/BUF -14 (Make the Bills a +5 underdog by inserting them into a massive 19 point NFL teaser offered at Wagerweb Sportsbook!)

The Buffalo Bills bounced back from their first loss of the season with a 23-20 victory over Baltimore last week. Playing in rainy conditions, the Bills fell behind 20-3 in the 1st half and appeared to be destined for a 2nd straight loss. However, the Bills’ defense came alive in the 2nd half, and QB Josh Allen put the offense on his back to rally to a 23-20 victory, which kept Buffalo tied at 3-1 SU with Miami for the top spot in the AFC East. On Sunday, Buffalo returns home for the first time since week 2 when they host the Pittsburgh Steelers at Highmark Stadium.

The visiting Steelers dropped their 3rd straight game last week to the lowly New York Jets, marking the 3rd time in Mike Tomlin’s tenure that the Steelers started 1-3 SU. In each prior instance, Pittsburgh did not make the playoffs, and I’m sure the playoffs are the last thing Pittsburgh fans are worried about. The offense has been outright bad through the first four games averaging just 18.5 points per game. However, there was a glimmer of hope in last week’s loss to the Jets when Head Coach Mike Tomlin benched QB Mitch Trubisky for Kenny Pickett and provided Steelers fans with their first glimmer of hope for the 2022 season.

Last week, Head Coach Mike Tomlin benched starting quarterback Mitch Trubisky after yet another ugly performance which has been a staple of Trubisky anywhere he has started. With perceived limited potential and another shaky start where Tribusky hit just 7 of 13 passing for 84 yards with one interception, Tomlin made the tough decision to bench the starter for 2022 first-round draft selection, Kenny Pickett. Pickett’s debut was filled with excitement and disappointment. The rookie hit 10 of 13 passes and scored two rushing touchdowns at the goal line. However, all three incomplete passes were the result of interceptions which essentially led to the Steelers’ 24-20 demise against the lowly New York Jets.

Obviously, Tomlin has been tasked with the difficult challenge of finding a new quarterback in the wake of Ben Roethlisberger’s retirement. Following last week’s changing of the guard, Tomlin was undecided about who would start next week’s road trip against Buffalo against the number 1 offense in the NFL. However, on Tuesday, Tomlin officially ended speculation and announced that Pickett would be the starter this week against Buffalo. In my personal opinion, this decision was obvious as Pickett displayed the better ability to control this offense, and it will be exciting to see the youngster get his 1st start this week.

The Buffalo Bills defense has been hit early with injury issues in the secondary which was a major concern in last week’s contest against the Baltimore Ravens. Fortunately, the Bills were able to survive unfavorable weather conditions against Lamar Jackson, but that has not exactly relieved the concerns surrounding the injuries to Micah Hyde, Xavier Rhodes, Christian Benford, and Tre’Davious White. More importantly, safety Jordan Poyer suffered a foot injury against the Ravens, which will jeopardize his availability on Sunday. On the offensive side of the football, WR Jamison Crowder suffered a broken ankle that will cause him to miss several weeks, and Isaiah McKenzie is in the concussion protocol. Needless to say, there were several concerns mounting in Buffalo on the injury front.

Despite the fact QB Josh Allen is playing at an extremely high level, I think the 14-point betting spread is a bit wide here, especially for a banged-up defense in Buffalo. If Pickett indeed gets the start as I expect, I like the Steelers to keep this one interesting.

Jay’s Pick: Take Pittsburgh +14. Bet your Week 5 NFL predictions for free by scoring a 125% real cash bonus up to $400 when you use bonus promo code PREDICTEM at GTBets Sportsbook! They’ll also give you a free half point everytime you bet your favorite teams!