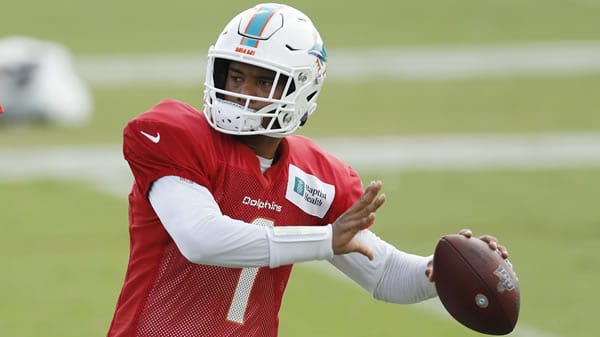 Point spread: LA -4/MIA +4. Bet ALL your college/pro football picks at -105 odds at BetAnySports! Making the switch to reduced juice -105 odds will save you LOADS of money!

Heisman winner Tua Tagovailoa gets his first NFL start when his Miami Dolphins welcome the Los Angeles Rams in from the West Coast for an inter-conference bout Sunday afternoon in SoFla.
This game didn’t look all that interesting when the schedules first came out, but with the Rams playing good ball, the Dolphins at .500, and Tago making his debut, it’s one of the more intriguing games on this week’s NFL betting slate. The Dolphins are getting a field goal-plus on the NFL betting line as home dogs. Who do we like here for our free NFL pick?

Week 8 NFL betting odds opened the Rams at -3.5 over the Dolphins, with an over/under of right around 48. Early betting action then bumped LA to -4 and dipped that total to 46.

Los Angeles is 5-2 on the season, after beating Chicago Monday night 24-10. The Rams took the lead for good with the first seven points of the game late in the first quarter, led 10-3 at the half, then scored the first 14 points of the second half and cruised from there for the win and the cover as 6.5-point favorites.

On the night, LA out-gained the Bears 371-279, out-rushed Chicago 161-49, and won first downs 24-14. Also, the Rams defense held the Bears out of the end zone; Chicago’s only touchdown came on a defensive fumble return in the fourth quarter.

Los Angeles has now out-gained and out-rushed five of its seven opponents this season.

This is the Rams’ fourth trip to the Eastern time zone already this season. LA beat the Eagles in Philadelphia in Week 2, lost a tough game at Buffalo in Week 3, then beat Washington in DC in Week 5.

At 5-2 overall, Los Angeles is tied with Arizona for second place in the tough NFC West, a half-game back of Seattle.

Meanwhile, Miami is 3-3 on the season, riding a two-game winning streak after blanking the hapless Jets two weeks ago 24-0. The Dolphins then enjoyed last week off.

Miami drove two of its first three possessions against the Jets to touchdowns, led 21-0 at the half, and cruise controlled from there for the victory and the cover as a 10-point favorite.

The Dolphins out-gained the Jets 302-264, and most of the yardage the Miami defense allowed came in garbage time.

After getting out-gained each of their first four games this season, the Dolphins have out-gained their last two opponents.

Three weeks ago, Miami won out at San Francisco 43-17.
The big recent news to come out of the Dolphins’ camp is the switch at quarterback, from veteran Ryan Fitzpatrick to rookie Tagovailoa. And they’re throwing him in against the No. 6 defense in the League.

At 3-3, Miami sits in second place in the AFC East, a game and a half behind the first-place Bills.

These teams met most recently four seasons ago; a 14-10 Dolphins win out at the LA Coliseum. But that was a coach ago for both teams and two quarterbacks ago for Miami.

Los Angeles is the better team here, but it’s also playing on a short week and on the other side of the country. Also, this game will kick off at 10 am on the Rams’ body clocks. Meanwhile, Miami is playing some decent ball but going with a rookie at QB is a questionable choice. Ultimately we foresee a tough, low-scoring game, in which four points might come in really handy. We like the Dolphins plus the points. Bet your Rams vs. Dolphins pick FREE by taking advantage of a 100% real cash bonus on your first deposit of $100 to $300 at MyBookie Sportsbook! Free loot is good loot!