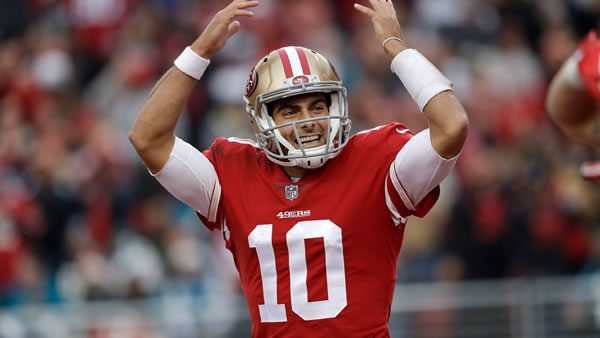 The San Francisco 49ers captured their 2nd straight victory last Sunday with a 37-15 victory over the Carolina Panthers. The 49ers defense was outstanding for the 2nd straight week and they flexed their muscles against a terrible Panthers offense with 4 sacks and a pick-six in the seemingly easy victory. The one-sided affair was essentially the final straw for Panthers Head Coach Matt Rhule who was fired on Monday following the defeat. For San Francisco, the win put the 49ers back on top of the NFC West and they will try to protect that position when they head into Atlanta for a week 6 showdown with the Falcons inside Mercedes-Benz Stadium.

The Falcons dropped a 21-15 loss to the Tampa Bay Buccaneers last week amidst some heavy controversy. Deep into the 4th quarter, the Falcons defense provided a critical stop on 3rd and 5 by sacking Buccaneers QB Tom Brady. The Falcons would have got the ball back with a chance to get a victory in the waning seconds. Instead, DE Grady Jarrett was penalized for the most bizarre and unwarranted roughing the passer penalties witnessed this season essentially ending the Falcons chances for an upset victory. Despite the controversy, the Falcons still managed to cover the spread and remain the only undefeated team in the NFL against the spread. On Sunday, Atlanta will be 5.5 point underdogs when they host the 49ers and make a run at another potential upset.

49ers emerging as top defense in the NFL

In the last two weeks, the 49ers defense has produced two extremely impressive performances against the Rams and Panthers. As things currently stand, San Francisco is the number 1 overall defense in the league allowing just 249 yards per game. However, I would argue that the defense has been more dangerous and better than the statistics may imply. The 49ers lead the NFL in total sacks (21) led by DE Nick Bosa (6) and that elite pass rush has forced opposing quarterbacks into many mistakes. In fact, the 49ers have returned an interception for a touchdown in each of the last two games. The combination of the run-defense combined with the elite pass-rush remains an enigma that other teams will have to deal with for the remainder of the season. The defensive prowess is also a heavy contributor to the fact that San Francisco has hit the “under” in 7 of the last 8 games and that is a trend that is unlikely to subside anytime soon.

Backed with an NFL leading defense, Head Coach Kyle Shanahan will continue to deplore a ground heavy attack. In recent weeks, RB Jeff Wilson Jr has looked great running the football and the 49ers will still continue to use WR Deebo Samuel in a utility role in the backfield as well. The Falcons defense has been decent against the run but they have been shredded against the pass allowing 290 yards per game. As a result, I believe the Falcons will need to be tough against the run because if they have to bring help close to the line of scrimmage, it will open things up for QB Jimmy Garoppolo who seems to do his best work off the play-action and running success.

For Atlanta, the offense has relied heavily on the ground attack this season to be successful and perhaps limiting the need to rely on QB Marcus Mariota who is completing just 57% passing with 4 touchdowns and 4 picks. The problem with the ground game is that star RB Cordarrelle Patterson was placed on the injury reserve two weeks ago leaving the ground attack to rely on the young duo of Tyler Allgeier and Caleb Huntley. Both running backs have shown potential but they will be faced with a difficult task against San Francisco’s run defense this week. If Atlanta can establish the ground game, they will have paths to compete and potentially win. I’m just not convinced that will happen given the state of Atlanta’s offensive front.

I believe the 49ers trend of hitting the “under” likely continues this week. However, I am going to back the 49ers to cover the spread as my primary bet.