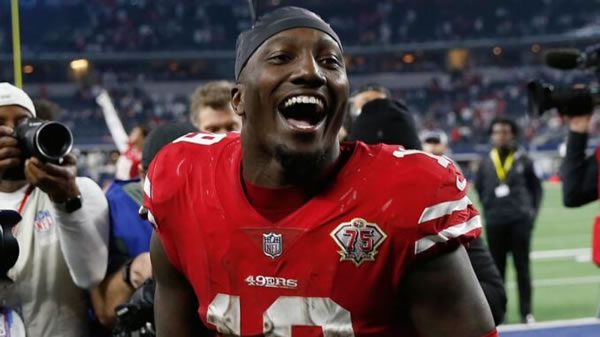 The Packers and 49ers continue their recent postseason rivalry when they meet for an NFC divisional-round bout Saturday night on what should be frozen tundra at Lambeau Field. These teams have met eight times in the playoffs since 1996, each winning four games, although San Francisco has won the last three postseason encounters, including the NFC championship game two years ago. Now, Green Bay goes looking for revenge.

The Packers are favored by a tweener number for this one; how are we playing this game with our free NFL playoffs betting pick?

The NFL divisional-round betting odds opened Green Bay at -4.5 over San Francisco, with an over/under of right around 47.5. Early betting action then bumped the Packers a point to -5.5.

According to Sagarin’s NFL ratings at sagarin.com, Green Bay should only be favored by 2.5 points for this match-up.

Any bettors out there thinking the 49ers might win this game outright could get upwards of +200 on the Moneyline.

San Francisco reached this divisional round by beating the Cowboys in Dallas in an NFC wild-card game Sunday 23-17. The 49ers, playing as three-point underdogs, drove the opening possession of the game 75 yards to a touchdown, led 13-0 in the second quarter and 16-7 at the half. San Francisco then scored the first seven points of the second half and held on from there for the victory.

One very key piece of injury news for San Francisco: DL Joey Bosa suffered a concussion in the second quarter against Dallas and did not return. His status for this game is uncertain, and his absence would certainly be felt.

Green Bay, meanwhile, opened this season - so long ago - with that dismal loss to New Orleans, then won seven games in a row. The Packers then lost a game at Kansas City without QB Aaron Rodgers, later lost a tough game at Minnesota but won five more in a row to clinch both the NFC North title and the No. 1 seed in the NFC. Green Bay then rested some people and lost its regular-season finale at Detroit two weeks ago 37-30. The Packers then enjoyed last week off.

Whatever the case Green Bay, after going 13-4 and playing over its season wins over/under, which was 10.5, is back in the playoffs for the third straight season.

The Packers also played 12-5 ATS this season, which is a neat trick for a team that was favored 13 times.

These teams have met five times over the past four seasons, Green Bay winning three times SU but San Francisco going 3-2 ATS. Most recently, just back in Week 3 of this season, the Packers won out in Santa Clara 30-28 on a 51-yard Crosby field goal at the buzzer.

Green Bay scored the first 17 points of that game, but the 49ers rallied to lead 28-27 with 37 seconds left. Rodgers then connected with the great Davante Adams on two throws for 42 yards, setting up Crosby’s clutch kick.

The Packers out-gained San Francisco that night 353-298 and won the turnover battle 2-0.

Also, that game played over a total of 51.

This season, the Under is 9-8 in 49ers games, which averaged 47 total points. Sunday’s wild-card win at Dallas then played under a total of 51.

The Under is 9-8 in Packers games this season, which averaged 48 points.

The overs are 4-1 over the last five meetings between these two teams.

San Francisco owns the better running game and the better defense, although we will be monitoring Bosa’s situation. Also, while we might normally consider the 49ers candidates for a letdown this week, following their big road victory last week, sometimes we’d rather be the team that kept playing during wild-card weekend rather than the team that had the week off. Also, these two teams just played a two-point game earlier this season, and there’s no reason to think this one won’t be close, too. We’re taking the Niners and the points here. Bet your Divisional Playoffs picks for FREE by taking advantage of a 100% REAL CASH bonus on your first deposit of $100 to $1000 at Betnow Sportsbook!