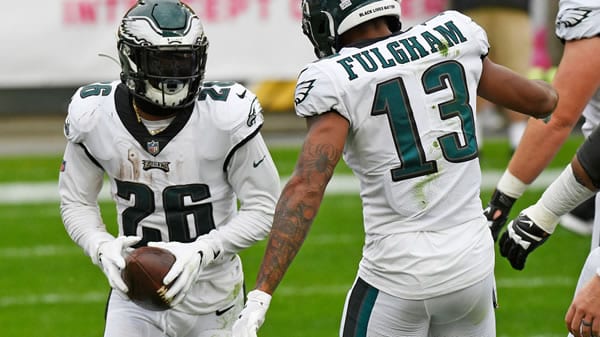 NBC has to be wondering if it can dig out old episodes of Friends rather than place this train wreck on their network, but bad football is still football that we can make money off of, so here we go. Thanks to their tie with Cincinnati, the Eagles “lead” the NFC East, which looks like it might be the most disastrous division in football history. So far, these are the only teams that have beaten anyone outside the NFC East, as Philadelphia has a win over San Francisco’s reserves, and Dallas managed to take advantage of the collapsing Falcons in the second half. But other than that, it’s been a rather ugly season for both of these teams, and it’s starting to look like six wins might actually be enough to get a team into the playoffs.

As such, the pressure is on for both of these teams, with Philadelphia apparently in much better shape. After all, the Eagles actually have their intended quarterback on the field, while the Cowboys are looking at possibly starting a man with all of three NFL passes in his career. With the season quickly sliding away from Dallas, can the Cowboys find a way to bounce back on the road and stay in the thick of the NFC East race?

How the Public is Betting the Dallas/Philadelphia Game

The public has completely turned on the Cowboys after their disastrous losses to Arizona and Washington, with the line more than doubling from Philadelphia -3.5 to the Eagles -7.5. Interestingly, the total has not moved.

Ben DiNucci, you might be up. With Andy Dalton questionable after a concussion (and not playing all that well anyway), the Cowboys look like they’re going to be turning to their seventh-round draft pick out of James Madison, who almost certainly never expected that he’d see the field this season. With such an inexperienced quarterback on the field, look for Dallas to focus on the running game if Dalton isn’t able to play.

However, that might not go much better. Ezekiel Elliott didn’t top 50 yards against either Washington or Arizona, and the Cardinals are nowhere near the run defense they once had. In fact, Philadelphia’s defense is slightly better against the run than Arizona’s, and Elliott fumbled twice and went nowhere against the Cardinals. Elliott hasn’t broken 100 yards even once this season, and the Cowboys have scored all of one touchdown since Dak Prescott’s injury against five turnovers. Having Amari Cooper and CeeDee Lamb should help in theory, but this is a bad offense that is going absolutely nowhere right now, and DiNucci is unlikely to fix that.

If a team is going to rise from the depths of the NFC East, it’s probably going to be the Eagles, who have actually managed to move the ball pretty well as of late. Philadelphia’s biggest problem is that the Eagles play to the level of their competition, which serves them well against the likes of San Francisco or Baltimore but puts them in a big hole against Washington or the Giants. Against New York, Carson Wentz should have done more than enough to win the game easily, but the Eagles ended up in a 22-21 dogfight that they had to pull out of the fire at the last second.

One of the problems for the Eagles is that Miles Sanders didn’t play in the win over the Giants, and without him, the Eagles’ running game just wasn’t what it was against Baltimore. Philadelphia isn’t anywhere near as effective when it’s only grinding out 3.7 yards per carry as it did against the Giants, as that puts the ball in Wentz’s hands far too much for their tastes. If Sanders isn’t able to go, Boston Scott will have to be better, as the way to beat Dallas is to run their defense over. The Cowboys cannot stop anyone on the ground (dead last in the league), and Dallas would actually prefer it if Philadelphia tries to beat them through the air. Wentz can do it, but the Eagles would be better off without trying that.

Dallas gets a lot of undeserved support from the public because it’s Dallas, and the Cowboys’ reputation has not matched the results. The Cowboys are 0-7 ATS this year and really haven’t come close to the number in either of their past two games. Against Washington, they were actually favored and got blown out from start to finish. However, November has traditionally been the time where they turn it on. Dallas has covered seven of its past nine in November, although that was also with Dak Prescott instead of Dalton or DiNucci.

Philadelphia, meanwhile, would just as soon forget November. The Eagles have lost five of six ATS in November, and it’s really a good thing that the Eagles are playing with limited fans in the stands right now. That’s because Philly has lost five straight when it’s been a home favorite, hardly something that the Eagles crowd wants to see in person.

The defenses might be poor, but the under has still managed to hit when the teams meet in Philadelphia. Over the past five meetings in the City of Brotherly Love, the under has cashed four times.

With partly cloudy skies and 60-degree temperatures, the weather might be the only positive thing about this game.

Dallas is just a disaster right now, but Philadelphia actually isn’t completely incompetent. The Eagles have played acceptable football against some quality teams, and other than the season-opening loss to Washington, every one of the Eagles’ losses has been entirely reasonable.

Dallas doesn’t have the ability to say that. A team should not score 38 on the Browns and fail to keep the game within a touchdown at home. A team should not lose by four touchdowns at home to a Cardinals team that’s still very much in transition. Dallas did both of those things, and the reality is that Dallas just is not anywhere near good enough to compete with Philadelphia unless DiNucci is ready for the big stage. I doubt he gets anywhere near threatening the Eagles in this one, though, and I will take Philadelphia to get the win and move toward a respectable record in the NFC East. Note: Many are bummed out that 5Dimes no longer offers bets to USA players. Most aren’t aware that they can still bet on games at -105! YES! Find -105 reduced odds betting at BetAnySports! Same great wagering platform that 5D used to have!