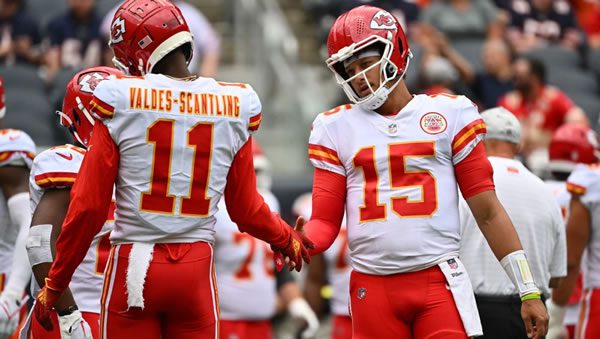 Is there a team that’s in first place and getting less respect than the Tennessee Titans? Technically, Tennessee finished in first place in the AFC last season. The Titans won more games than the Chiefs, the Bills, and the Bengals last season, and had Tennessee beaten Cincinnati in the divisional playoffs, the winner of Kansas City-Buffalo would have known it was going to Nashville for the AFC title game.
And yet, with the Bills atop the AFC East, the Chiefs leading the AFC West, and the Titans in first in the AFC South, absolutely nobody is giving Tennessee much of a prayer at going to Arrowhead Stadium and surprising the Chiefs. And if you go by the numbers this season, you can see why. Tennessee is not really the kind of team that matches up well with Kansas City. The Titans are built to beat you on the ground, not by taking to the air, and in order to beat Kansas City, you need to win the battle in the air. The Chiefs took a good look at their competition in the AFC, reasoned that they could outscore Buffalo, and have built their defense around keeping teams from going on long drives that keep Patrick Mahomes off the field.
But despite the seemingly bad matchup on paper, the Titans seem to save their best for Kansas City. Tennessee has won five of the past six meetings and covered in five of them. A year ago, the Titans got that No. 1 seed in large part because they smacked around Kansas City, beating the Chiefs by 27-3. That’s not likely to replicate itself, but this game might not be as cut and dried as it appears.

How the Public is Betting the Tennessee/Kansas City Game

The public believes in the Titans here, but the money likes the Chiefs. The spread has increased from -11.5 to -12.5, even as 61% of tickets are on the Titans. The total has held firm.

If Derrick Henry isn’t able to go, then Tennessee is in big trouble. If Ryan Tannehill cannot go, Tennessee is also in big trouble. If both are unable to go, the Chiefs giving 12.5 points might be way too low. Tennessee already has the weakest offense in the NFL, with Henry dominating on the ground because Tannehill is nothing but a game manager and is totally fine with that in his career. But the difference is defenses have to respect Tannehill enough to give Henry space to run the football. When Tannehill gets space to throw, he can attack and be pretty effective.

The same is not true with Malik Willis, and the Chiefs boast an excellent run defense, which means that Kansas City is going to load up against Henry (if he is even on the field) and force Willis to beat them if Tannehill isn’t on the field. Maybe someday, Willis will be able to read an NFL defense, but for the time being, which is all we’re concerned about, he cannot do that. Andy Reid knows what his defense needs to do and knows that Tennessee is very limited without Henry, so if he’s not on the field, the Titans are going to have a hard time getting any offense generated.

You have to wonder what exactly Tennessee was thinking in building its team this way. On one hand, the Titans do have to worry about the AFC South first, and building a great run defense is the way to put the Colts, Jaguars, and Texans on ice and keep racking up division titles.
On the other hand, Tennessee is eventually going to expect more than just a first-round home playoff game, and that means beating the likes of Kansas City and Buffalo. Both of those teams throw the heck out of the ball, and Tennessee really has no answer for what Patrick Mahomes brings to the table. In this game, Kansas City might hardly bother to run the football because there is little point to doing so. The Titans do not stop the pass, as the Bills proved, and the Chiefs have the attack needed to throw all over the field. The reality is that Tennessee has a good defense because it’s faced mostly teams with bad quarterback play. Outside of Josh Allen, the best quarterback the Titans have seen all year was Derek Carr, and he threw for 300 yards. After that, the next best signal caller Tennessee has faced might be Carson Wentz, which speaks to just how weak the schedule has been. Mahomes could have a field day here.

The Titans have owned this series as of late, covering in five of six and covering in five of seven at Arrowhead. Plus, the Chiefs keep getting too much respect because the money pushes the spread far too high. Kansas City is 0-5 ATS in its past five AFC matchups, while Tennessee has covered four straight against league opponents. The under has also been a sneaky play in Kansas City games, as four of their past five against AFC foes have played to the under.

The evening should be clear and cool, with temperatures falling to 46 degrees and wind blowing at seven miles per hour to the northeast. There is no rain expected.

If Tennessee is healthy, this spread is too high. If Tannehill and Henry don’t play, the Titans are roadkill. Kansas City has the right personnel to dominate this matchup, and I don’t think Tannehill will be on the field. I’d wait to make sure if you can on Tannehill’s health, but I’ll back the Chiefs. Did you know that you could be betting on games at -105 odds instead of the spendier -110 your book is slapping you with? Who doesn’t wanna save money? Dump your crap book today and start betting for cheaper at BetAnySports! We’ve advertised them for 15 years with ZERO complaints!