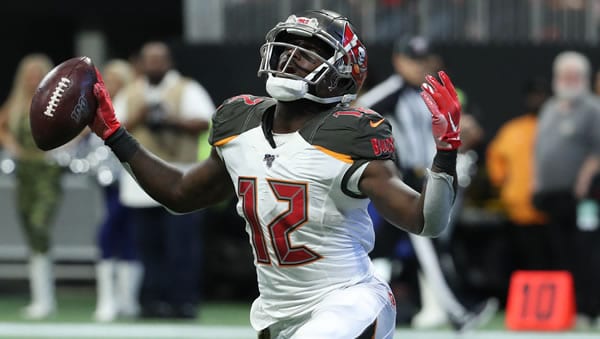 The Tampa Bay Buccaneers take on the Detroit Lions in NFC action on week 16 from Ford Field on Saturday. Tampa is looking to put the finishing touches on their playoff cause, as they are currently pegged for one of the wild card spots, with an outside shot to still win the division, with New Orleans having dropped two straight. It was a struggle on Sunday, but after a slow start, they beat Atlanta, 31-27, for their second win in a row. For Detroit, it was more of the same on Sunday, as they fell to 5-9 with a 46-25 loss to the Titans. Who can get the upper hand on Saturday?

The Lowdown on Tampa

For a team long in the dumps, a 9-5 record is nothing to sneeze at. In the last handful of weeks, they seemed to have slipped some and no longer loom as a real contender. Last week was a microcosm of their problems, where you don’t know what version of the Buccaneers you will see. The first half saw them sputtering on both sides of the ball. Drive after drive went nowhere. Meanwhile, the Falcons were doing their thing and throwing the ball all over the field, taking a 17-0 lead.

Then the Buccaneers started cranking it up. The defense, which usually plays in consort with the offense, responded in kind, and Atlanta was struggling to sustain drives suddenly. Tom Brady started hitting people left and right and mostly based on the strength of one half, Mike Evans had 110 yards, and Antonio Brown had his first big game with the team with 93 yards and a TD. Chris Godwin had a TD and all the earmarks of a successful day for the Bucs were present, except that it all happened in the second half.

Since coming off the bye, a late one that came in week 13, the Bucs won both their games. After losing two in a row and three of four and looking downright ragged in spots, winning the last two was the key. But two weeks ago against the Vikings, their win was largely attributed to the miscues on the Vikings’ side, namely their atrocious kicking issues. And then to fall into the hole so dramatically against a team like the Falcons—it shows that Tampa is in a bit of a funk, really needing a lot to go their way just to beat two sub-.500 teams. They get another one this week, but it might not be the cinch that it appears to be on paper.

Can Detroit Do Anything About It?

The bottom line didn’t look so good on Sunday, a 21-point road loss to the Titans. They gave up three TDs to Ryan Tannehill and another really big day to Derrick Henry while not seeing a ton go right on offense. And still, going into the fourth quarter, they were only down 24-18 and were hanging in there nicely, before a big final quarter for the streaking Titans. The week before that was a one-score loss to the Packers, which followed a win on the road over Chicago. They have been a maddening team in many ways, and firing their coach a few weeks ago attests to that. But to be frustrating, you have to be good, otherwise, there would be no expectations. For example, they have blown some big leads this season. At the same time, they were good enough to build big leads on some pretty good teams. Whenever their season came to an important game, they went right into the tank. Yet, they were still good enough to offer some hope this season, at one point getting to .500 after a terrible start to the year.

So it’s a tale of two coins with the Lions. Matthew Stafford can still flash a live arm and put up big yards, even with a cast that has taken some hits on the injury front. Stafford himself is banged-up and playing through it. But while there are no stars on this offense, they are, in fact, pretty deep with promising rookies, up-and-comers, and valuable role guys. At root, they can be really dangerous in the right spots. At home against a defense that has ebbed some over the course of the season, this could very well be the right spot.

Obstacles for the Lions

Putting the last two weeks aside, this right here is why Tom Brady is paid the big bucks. It’s late in the season, and there’s still work to do as far as locking up a playoff spot, though they’d really have to blow it now to not get in. Nevertheless, the time is now for Brady to up the ante and start getting this team on the right track. And Detroit is, in many ways, the right opponent for that. The Lions are dangerous enough to draw the ire of the Bucs but unreliable enough to where they will always make either winning or covering the spread an enormous uphill battle.

With Detroit this week and Atlanta again next week, I look for Tampa to start putting some more-emphatic beatings on these teams. Detroit is still engaged and trying, but the difference in the urgency-quotient is vast in this game. And that might also be true of their respective fighting spirits. I see a continuation of the second half from last week, where Tampa is close to firing on all cylinders—a scenario that would make it hard for the Lions to keep pace. I’ll take Tampa.

Loot’s Prediction to Cover the Point Spread: I’m betting on the Tampa Bay Buccaneers minus 9.5 points. Bet this game and ALL your sports picks at -105 odds instead of -110 at the web’s best priced odds bookmaker —> BetAnySports! Betting on games at reduced oddss is like getting a bonus every time you bet!