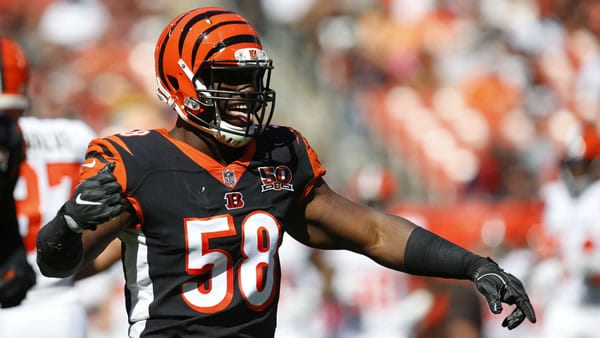 The Tennessee Titans, playing against heightened expectations this season, are 5-1 straight up but only 2-4 against the spread, favored by too much too often. The Cincinnati Bengals, on the other hand, with a rookie starting at quarterback, own just one win on the season but five covers out of seven games. How might those trends affect our free NFL Week 8 pick on Sunday afternoon’s Titans-Bengals scrum in Cincinnati?

Week 8 NFL betting odds opened Tennessee as a four-point road favorite for this game, with an over/under of right around 55. Early betting action then bumped the Titans to -6 and dipped that total to 54.5.

Tennessee just suffered its first defeat of this season, 27-24, at home to fellow unbeaten Pittsburgh last Sunday. The Titans gave up the first 14 points of the game and trailed 24-7 at halftime, then gave up the first three points out of the locker room. But Tennessee then used a 17-0 run to rally within 27-24 early in the fourth quarter. The Titans later had a chance to force overtime in the last half-minute, but kicker Stephen Gostkowski sliced a 6-iron from 45 yards just off to the right, and that was it.

On the day Tennessee got out-gained by the Steelers 362-292, out-rushed 94-82, and lost time of possession by a 37:23 split, allowing Pittsburgh to hit 13/18 on 3rd-down conversions. The Titans won the turnover battle 3-0, picking off Ben Roethlisberger three times, but it only resulted in a +3 points differential.

Tennessee has now been out-gained four times in six games this season.

The Titans own victories this season over Denver, Jacksonville, Minnesota, and Houston (in overtime), four teams that are a combined 5-21. And those four victories came by a total of 12 points. A few plays here and there and Tennessee could be a .500 team, instead of four games above it.

Meanwhile, Cincinnati is 1-5-1 on the season, after losing a heartbreaker at home to Cleveland Sunday 37-34. The Bengals led 7-0 early and 17-10 at the half. Then, over a crazy final 17 minutes, Cincinnati led 20-17, trailed 24-20, led 27-24, trailed 31-27, then took the lead on a fourth-down touchdown with one minute to go. Unfortunately, the Bengals defense then allowed Cleveland to drive 75 yards in five plays to a game-deciding score with 11 seconds left. A Joe Burrow Hail Mary on the final play actually reached the end zone, but lucklessly.

However, Cincinnati financial backers got a gift when Browns’ kicker Cody Parkey – Mr. Double-Doink himself - missed the final extra point, giving the Bengals the cover as four-point dogs.

In fact, Cincinnati lost both games to Cleveland this season but covered both games as the underdog.

The Bengals actually out-gained the Browns Sunday 468-398, ran 73 plays on offense, compared to 51 for Cleveland, and won the time of possession by a 33:27 split. But Cincinnati also lost the turnover battle 2-1, which basically resulted in a -3 points differential and perhaps the ballgame.

The Bengals have now out-gained two of their last four opponents.

One of these days, Cincinnati’s gonna upset somebody.
These teams last met three seasons ago, a 24-20 Titans win. But that was a quarterback ago for both teams.

Darin’s Pick to Cover the Titans vs. Bengals Spread

Tennessee’s playing a lot of close games, winning most of them, but living a bit dangerously. Cincinnati’s also playing close games, competing well against supposedly superior foes, but losing most of them. Our guess is this game will finish close, too. We like the Bengals and the points. Question: What does your book charge you for odds? Are you laying -110? If so, you should seriously consider making the switch to -105. It will save you tons of money! There’s a good chance you’ll find better offering at our recommended book as well! Faster payouts, simple wagering menu, more props. Find all this and more at BetAnySports! You’ll be so glad you switched!