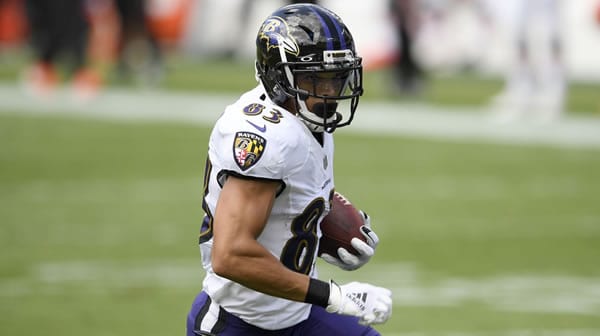 Despite the perception as one of the AFC’s best teams, the Baltimore Ravens have dropped 2 of their last three games following last week’s 23-17 loss to the Patriots. Perhaps more importantly, the Ravens are now fighting for their postseason lives. At 6-3 SU, the Ravens are tied with the Dolphins, Titans, and Raiders in the AFC Wildcard race. On Sunday, Baltimore will have the opportunity to right the ship when they host the Tennessee Titans at M&T Bank Stadium. The Ravens are listed as 6 point favorites for this Sunday’s match-up, but the Titans are the same team that ended Baltimore’s postseason journey at the end of last season.

If you happen to recall that AFC Divisional match-up back in January, the Titans put the entire offense on the legs of running back Derrick Henry, who converted 30 carries for 195 yards on the ground. It was Henry’s performance in the playoffs last year that led the Ravens towards addressing needs along the defensive front over the offseason. While it would appear that Baltimore is in a better situation to stop the Titans’ run-heavy offense this Sunday, the defense has been hit with several key injuries in recent weeks. NT Brandon Williams went down in the loss to New England, and DE Calais Campbell was already inactive. As a result, Baltimore’s defensive front will likely face another significant test when they meet the Titans.

While last year’s match-up will draw a lot of attention this week, we need to also consider current form into our breakdown. After starting the season 5-0, the Titans have dropped three of their last four games. In those three losses, Tennessee has allowed significant scoring from some of the AFC’s most mundane offenses in the Steelers, Bengals, and Colts. Offensively, the Titans have played well. They have protected the ball. RB Derrick Henry has been the workhorse and effective focal point of the offense. Additionally, QB Ryan Tannehill is having an exceptional season with 2,128 passing yards for 20 touchdowns and just three interceptions.

Get reduced juice! Lay only -105 on spread bets at BAS Sportsbook.

So what is the problem? Well, I would point to the defense and particularly the Titans secondary. Tennessee has allowed 277 yards per game through the air this season, which ranks as the 6th worst pass defense in the league. If we just look back to last week’s game against the Colts, the Titans allowed Old Man Rivers to throw for 300 yards, which is shocking when you consider Rivers appears to have the arm strength of a high school junior. To put it mildly, Tennessee is having big problems against the pass, and that is very concerning against a Baltimore team that can stretch the field by luring defenses towards the box with their elite rushing threat.

I have been waiting for Lamar Jackson to show us the player that swept the NFL by storm in 2019 in route to MVP honors. However, Jackson has not had the monstrous season that many may have expected. Jackson has not thrown for more than 250 passing yards since the opener, and while he is still the most dangerous rushing quarterback in the league, we have not seen nearly as many big plays this season. With that being said, I have a relatively bold prediction for this week’s match-up against Tennessee. I am expecting Jackson to have one of his biggest games of the season this week. The match-up is perfect, and the pressure is building for the Ravens to turn things around. A loss to Tennessee would critically hurt their playoffs chances. The Titans have struggled against mobile quarterbacks this season. Additionally, I would also bring up the fact that Jackson threw for 365 yards and rushed for 143 in that playoff meeting in January. I highly doubt we will see those numbers again, but I believe Jackson will have a great game as they are catching the Titans’ defense at the right time.

Jay’s Pick to Cover the Point Spread: All of the trends point towards the Titans struggles, and the Ravens have a really good match-up if they can keep Henry from another huge performance. Take Baltimore -6. The web’s best bonus is back for another week! Did you know that you can deposit up to $1000 at BetNow Sportsbook and they’ll match your deposit dollar for dollar with a real cash bonus? Sick offer! Get it now!