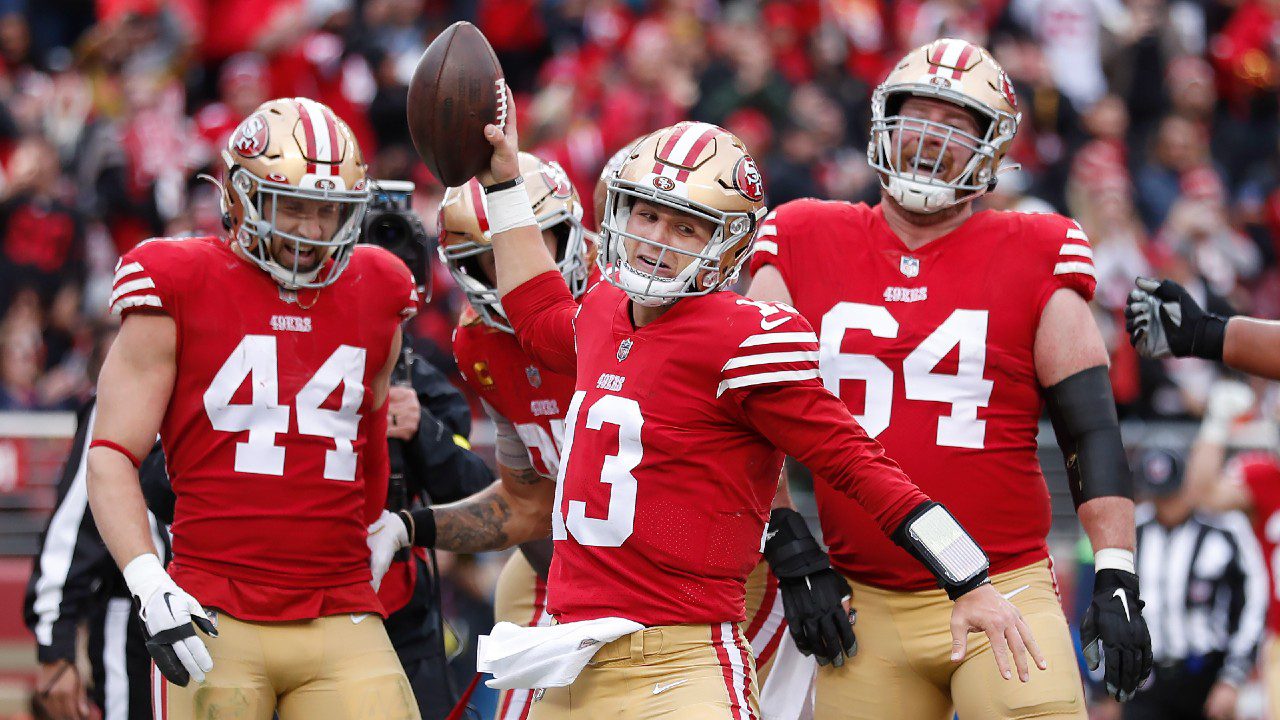 The San Francisco 49ers take on the Seattle Seahawks on Thursday Night Football at Lumen Field in an NFC West battle. It’s a big game for both teams. The Niners are trying to soldier on through massive injuries, with more having occurred in their 35-7 win over the Buccaneers on Sunday. The win moved them to 9-4, but they’re dealing with more setbacks. Coming into Seattle might not be easy, as the 7-6 Seahawks now need to start winning to keep pace in the wild card race following a 30-24 loss at home to Carolina. Early in the season, a 27-7 win for the Niners gave them a leg-up in this season’s series, but how much that game matters amidst all the things that have changed is dicey. Who can get the upper hand in this divisional battle from Seattle?

Can the Niners Maintain?

Looking at their injury report is starting to become harrowing. You could make a pretty good roster just on the guys they have out. Top talent from both sides of the ball are out of action, with a gaggle of others listed as questionable. Now among that lot are QB Brock Purdy and Deebo Samuel. They are already three-deep at QB, and on Sunday, we saw perennial journeyman Josh Johnson put into action. We’ll have to keep an eye on these developments as we move toward game-time, with the short week likely doing Purdy and Deebo no favors.

With the Niners, you can’t help but feel torn. Everything you know tells you a team can’t thrive amidst these conditions forever. Then we remember that other than the year they went to the Super Bowl a few years ago, this situation with injuries is nothing new. They’ve dealt with this before. And during the course of all these periods where they’re getting pounded by injuries, they’ve managed to hang in there. Over the years, they’ve developed a certain resilience to this, along with developing a lot of depth throughout their roster, with an all-hands-on-deck philosophy they resort to out of necessity. It’s a developed muscle in their makeup. At the very least, a different lens is required when figuring out how to classify San Francisco in terms of team quality with a massive amount of personnel setbacks occurring.

Can Seattle Bounce Back?

The last three weeks, we’re seeing more of what people had in mind with the Seahawks this season. This recent funk has taken what was looking like a major overachieving type of season and thrown it into a funk as we come to the final handful of games. Most concerning is that, being at home, they couldn’t turn back the Panthers last week. Not having Kenneth Walker, III. In there definitely hurt, as his rushing prowess has given this offense a new dimension. The last month shows a lot of the shine coming off—the loss to Carolina, barely beating a decimated Rams team and losing to the Raiders in overtime while also falling to the Buccaneers in Europe. It has become more ragged. Injuries have taken their toll. The connections with Tyler Lockett and DK Metcalf have become less automatic.

In the last three games, the Seahawks have allowed 93 total points, and with that coming against the Raiders, Rams, and Panthers, it starts to paint a bad image of this Seattle defense. One almost gets the impression of a car being held together with tape that is starting to see the adhesive fade, with parts of the car dropping all over the highway. For much of the season, we saw them being coached up and showing a ton of energy to bridge the gap. But maybe what we’re now seeing is just what the Seattle defense is—a unit that can be picked apart in a number of ways and that allows production even to struggling offensive units.

They’re at home, dug in nicely for their second straight home game. San Fran is taking to the road for the first time after three straight home games, and while it’s familiar territory and not a long trip, it’s not home. Now at quarterback is a dinged-up Brock Purdy coming off an oblique injury, with Josh Johnson in the wings. We’re not sure about Deebo. With Christian McCaffrey also dinged up and on the short week, how much of a workload are they going to give him? They’re battered in their running back corps. And granted, a winning case for Seattle can’t all be wrapped up in what’s wrong with their opponent. And it’s not like Seattle is doing well lately while the Niners continue to stockpile wins. It’s just that now might not be the worst time to forecast some diminishing returns from the 49ers, especially with the Seahawks in a state of real urgency and desperation this week.

Low-rating the Niners and thinking that problems that derail most teams will do the same to them hasn’t really worked out this season. And one doesn’t have to even think that to like the Seahawks at home getting 3.5 this week. Seattle really had to buck everything to even be in the mix this late in the season, and a lot will be put into winning this, as this is a clear line-in-the-sand moment for them. A loss here makes it all seem for naught, while a win puts wind in their sails. What I think that equals up to is a close game where the Seahawks cover the spread. I’ll take Seattle on Thursday Night Football.

Loot’s Prediction to Cover the Point Spread: I’m betting on the Seattle Seahawks plus 3.5 points.