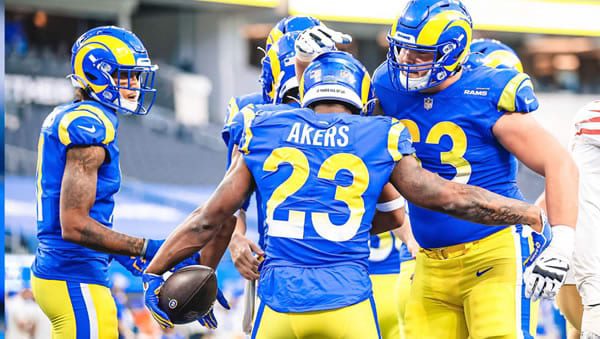 The New England Patriots take on the Los Angeles Rams on Thursday Night Football. It’s a key game for both teams who are coming off successful weeks, each scoring key wins to keep their upward trajectory going. The Pats, who will be facing their second road trip to LA in consecutive weeks, are coming off a 45-0 rout over the Chargers, and after a 2-5 start, the Patriots are now a team with a future again at .500. The Rams showed they mean business on Sunday, going into Arizona and scoring a 38-28 win to go to 8-4. Who can come up on the sunny side of this one on the short week?

Looking at the Patriots a Different Way

For the Patriots to deliver in a trying time of the season means a lot for a team that looked all but finished not too long ago. And for them to be thriving now, scoring some nice wins over good opposition, and the eye-popping 45-0 win on Sunday really speaks to the mental strength of this team and the coaching of Belichick in getting this turned around. They are in a stretch of six road spots in eight games, with Miami on the road looming next week.

We started to see a shift with New England in week 8, with a very narrow loss over new division leader Buffalo. Wins over the Jets and Ravens followed, though they were slowed in a puzzling loss to Houston. But a win over the Cardinals and their demolition over the Bolts has them evened up, so what gives? The first thing is that between Newton, RB Damien Harris, and a deep cast of runners, they have a pretty strong ground-attack. Newton’s four TDs and nine picks doesn’t inspire a lot of confidence in the aerial-game, but Damiere Byrd and Jakobi Meyers have been making more of an impact in recent weeks. The fact that the offense has stayed together despite not having Julian Edelman, Rex Burkhead, and all the other pieces they’ve lost recently is somewhat amazing.

Get all of our NFL game previews as they’re posted: NFL Picks for Week 14 >>>

Looking at the Patriots along normal lines doesn’t work so well. On Sunday, it was special teams that shined the most, as they completely rained terror down on the Chargers all day in that area. But then you add in little things that can take a bad team and make it better. Cam Newton is a real running threat in the red zone and knows how to get in the end zone. The defense has improved despite injuries, with Belichick getting the most out of this group, and opponents are visibly more-flummoxed lately. The New England “D” has been clutch as of late, coming up with big plays in timely fashion.

Watch Out for the Rams

It’s almost like this season is a hybrid of the Rams’ last two seasons, where they went to the Bowl after the ’18 season and when they fell apart last year. Last week in a loss to San Fran, we saw the bad, while the good surfaced last week, their third win on four games. And with those wins coming against the Seahawks, Bucs, and Cardinals, it gives their recent work an air of quality. But make no mistake, from week to week, there really is no telling what you’re going to get. Sometimes, it’s that impotent offense where Jared Goff and Company are their own worst enemies with the turnovers and other miscues. Then other times, we see the balanced offense, with Goff connecting smoothly to his bevy of targets, with the run-game getting cranked-up. The defense is making a big impact. On Sunday, Troy Hill’s pick-six and Aaron Donald’s work up-front was key. This is a defense that can change the course of a game. They’re solid all around and make a ton of plays—getting to the QB and taking the ball away.

It’s not easy running the ball against the Rams, and opposing quarterbacks find themselves equally stymied. Only three teams have allowed fewer points. In the end, it really appears to come down to the offense. And pinpointing how that side of the ball will perform is an inexact science, to say the least. Granted, they’re facing a Patriots team that might be road-weary and not really in their element. Not to mention there are still some guys on this sideline who might be more motivated after losing the Super Bowl to this team less than two years ago. But watching New England lately, this might not be the ideal spot for a mistake-prone offense to thrive. Whether it be on special teams or in handling the ball on offense, the Patriots have a knack to seize upon it. Teams like that, who specialize in doing the little things, are sometimes a real thorn in the Rams’ sides.

On paper, taking the Patriots in this spot might be problematic. They’re not going to be able to rely on the special teams’ gaffes they got last week. And for an offense that is really just trying to patch things together the best they can, the Rams are a tough defense to face. I just can’t help but admire the job that the coaching staff has done with the Pats, really bringing about a significant change, showing that it’s harder to derail a long-winning team than some thought when most relegated New England to the scrap heap. I envision a resourceful performance for the Patriots, not dissimilar to what the Niners did against the Rams a few weeks ago, where defense, attention to detail, and a strong run-game prove to be a worthy foil to the more-explosive Rams. I like the Pats to cover the spread in this stadium for the second straight week.

Loot’s Prediction to Cover the Point Spread: I’m betting on the New England Patriots plus 6 points. Bet your NE/LAR pick and ALL your football bets at -105 reduced odds each week (hoops too!) at BetAnySports! You will be so happy making the switch to reduced odds!!