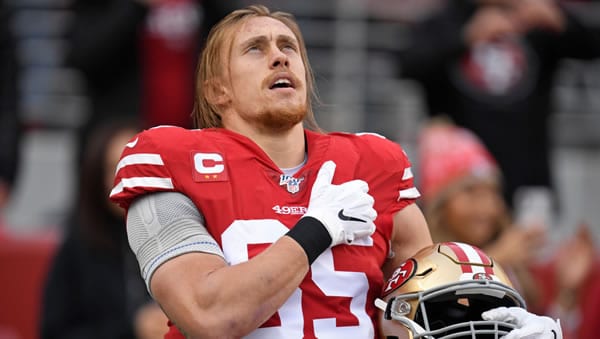 The Green Bay Packers come to Levi’s Stadium for a critical NFC matchup with the San Francisco 49ers on Thursday Night Football. Both teams are licking their wounds a bit, coming off the short week into what might be a crossroads game for both. The Packers were beaten up at home by the Minnesota Vikings, 28-22, on Sunday. Having looked a bit ragged since a 4-0 start, coming into the Bay Area on the short week might be tough. And San Francisco needs this even more after falling to 4-4 with a loss to Seattle on Sunday. These teams met in last season’s conference championship game but haven’t looked the part in spots. Who can cover the spread in this one and get back on the winning track?

Probably not. Between all that has happened between now and last season, it might not mean all that much. In addition, injuries have left San Fran a shadow of what they were last season when they started 8-0. Still, when non-division teams play twice and once in a high-stakes conference title game, it’s worth mentioning. But is this the same San Francisco team that twice beat the Packers last season? The offense that put up 37 points in both of their games is not what it was last season. And other than some vague notion that the 49ers match up decently with the Packers, there might not be much to gleam from last season’s results.

The Niners have already seen a lot of things go down through half a season. Guys have gone down to injury on both sides of the ball at an incredible rate. And right when it seems like they’re getting it together, more guys fall, and it’s been too much to withstand. On Sunday, both Jimmy Garoppolo and George Kittle left the game with injuries, and pretty soon, they’re going to be a team almost entirely made up of reserves at nearly all the key positions. The injuries are too many to name, but suffice to say that their injury list looks closer to the team they wanted to field than what’s actually out there right now. And it just keeps getting worse.

You have to admire how the Niners managed to get back over .500 amidst all this, until running into Seattle last week. And how optimistic people were of the 49ers’ chances spoke to how well they were keeping it together. But it’s been one punch in the gut after another since the season started, and you have to wonder if they’re going to fold at some point. They haven’t had a bye or a chance to regroup, and now facing even more injuries and coming off the short week is a big ask, even for a defending conference champion.

Get reduced juice on spread and total bets at BAS Sportsbook!

At times over the last several weeks, the Green Bay team we saw early in the season hasn’t surfaced with the same consistency. At 4-0 and with everything looking really good, the Packers came into Tampa and came up woefully short in a 38-10 loss. Getting Davante Adams back seemed to invigorate Aaron Rodgers and the aerial game as they laid into Houston with a big offensive outburst. But this past week, after taking a 14-7 lead, they went into the tank for the rest of the game until late in the 4th quarter when it was too little, too late.

Not having Aaron Jones the last few weeks has really hurt, as his production had been a major part of the Packers’ upsurge over the last season and change. It has the Green Bay offense a little off their normal rhythm, and replacing his production has been difficult. And while the Packers have some talented people other than Adams and Jones, getting consistent production from guys like Marquez Valdez-Scantling, Robert Tonyan, Jamaal Williams, Allen Lazard, and other role players has been a hit-and-miss proposition.

When the Green Bay offense was flying high, the inadequacies on the other side of the ball were less in the spotlight, but as this season wears on, we see a defense that has its good points, but is average at best in an overall sense. They’ve been clutch and come up with big plays here and there. But in some spots, they hardly make an impact. They’ve gotten a mere four turnovers all season, and with San Fran looking to run the ball with all their QB issues, the Green Bay run-resistance has been waning seemingly with each passing week.

On the surface, the picture can make us get carried away in our assessments. The Packers, after losing two of three, should be urgent to right the ship, and what better spot than against the team that tormented them last season? By the same token, we can’t ignore how ragged Green Bay has looked in spots. It makes a lot of sense that a mostly-intact Green Bay team should beat a 49ers squad that only faintly resembles its former self. But even in the midst of all this wreckage, the 49ers can still surprise from time to time, and it’s a tough road spot on the quick turnaround for a Green Bay team that hasn’t thrived on this field lately.

We could be seeing the part of the season where whatever kept SF somewhat upright will begin to wane. It’s unclear if they have the active personnel necessary to take advantage of Green Bay’s inadequacies. It’s also unclear that Green Bay is any real trouble or if they’ve just been a little off-kilter the last few weeks. Since coming into Green Bay, coach Matt LaFleur is 18-5, so maybe they deserve a little slack. Garoppolo’s exacerbated ankle issues are a definite concern, and with all their other issues, I’m not sure they’re very bankable in this spot. Not that Green Bay is in the best spot, but I see them getting the win and cover this week.

Loot’s Prediction to Cover the Point Spread: I’m betting on the Green Bay Packers minus 2.5 points. Bet your Week 9 picks for FREE by taking advantage of a 100% real cash bonus on your first deposit of $100 to $300 at MyBookie!