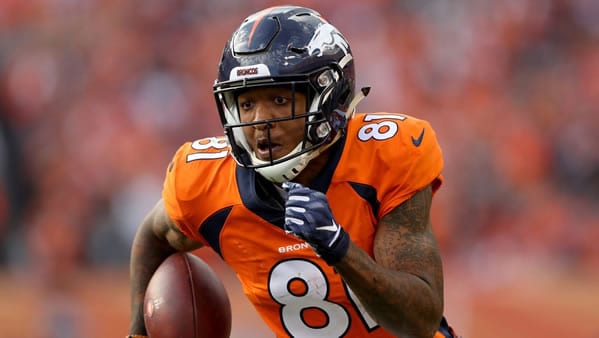 Two teams in serious need of a win meet when the Broncos host the Washington Team Sunday afternoon at Mile High. Washington lugs a three-game losing skid into this contest while Denver owns a four-game losing slide. But while this game may appear dangerous to many bettors, we found a lean we like.

Here’s our homework for this inter-conference bout with our free NFL betting pick.

The Week 8 NFL betting odds opened the Broncos as four-point favorites for this game, with an over/under of right around 44. Early betting action then dipped Denver to -3.

Any bettors out there thinking Washington might win this game outright, which is totally possible, could get a price of around +150 on the NFL betting money lines.

The WFT is 2-5 on the season after losing at Green Bay last week 24-10. But Washington certainly had its chances. The Team allowed the Packers to drive the opening possession of the game yards to a touchdown, tied the score on a long touchdown pass a few minutes later but trailed 14-7 at the half. Washington then lost the second half 10-3 and missed out on the cover as a nine-point underdog.

The WFT actually out-gained Green Bay 430-304, out-rushed the Packers 195-57, and won time of possession by a 33:27 split. But Washington also came up completely pointless on five incursions inside the Green Bay 30-yard line, twice coming up empty inside the 5.

The Team has now out-gained and out-rushed three of its last four opponents, but it’s only 1-3 both SU and ATS over that span, which sounds to us like some bad football luck.

Still, at 2-5, Washington only trails Minnesota by a game and a half in the battle for the seventh and final NFC playoff spot.

The Broncos, meanwhile, are 3-4 on the season after falling at Cleveland last Thursday, 17-14. Denver trailed the banged-up Browns 10-0 at the half, got within 10-7 in the third quarter, and 17-14 with five minutes to go. But they couldn’t get the ball back and came up short ATS as a 1.5-point underdog.

So Denver has been out-gained each of its last four games, scoring a total of 64 points in the process.

And yet, at 3-4, Denver only trails the Browns by one game (and a tie-breaker) in the battle for the seventh AFC playoff spot.

These two teams last met three seasons ago, a 27-11 Washington win. But that’s already a long time ago for both these teams.

Overs are 4-3 in Washington games this season, which are averaging 51 total points.

The Under is 5-2 in Broncos games this season, which are averaging just 38 points.

Washington is better than its 2-5 record indicates; we like QB Heinicke and expect improvement on defense. On the other hand, Denver is fading, following its 3-0 start, and will probably be looking for a new head coach in the near future. We’re betting the WFT here, and they might not even need the points. Bet your Week 8 NFL picks for FREE by scoring a 100% bonus on your first deposit of $100 to $300 at the web’s most fun sportsbook —> MyBookie (Must use bonus code PREDICT100 when registering).