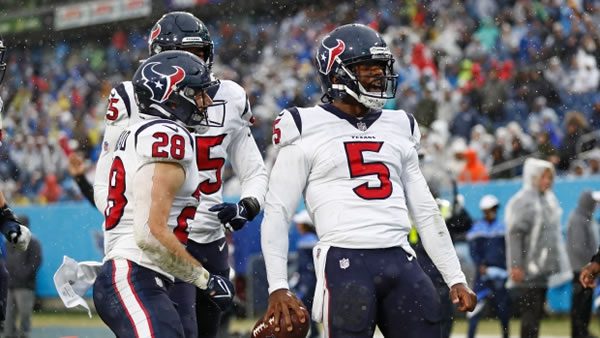 The New York Jets come to NRG Stadium for a Week 12 showdown with the Houston Texans on Sunday. The Jets gave it a go on Sunday but fell to 2-8 with a 24-17 loss to the Dolphins. The Texans, meanwhile, scored the most-eye-popping result of the week, a 22-13 win over the Tennessee Titans, playing as double-digit underdogs. A combined W-L record of 4-16 won’t elicit much national interest in this game, but it’s an interesting betting conundrum that presents challenges to bettors. Who can cover the spread in Houston on Sunday?

It can sometimes be easier to relate bottom-end teams like this to teams who are on a whole different plateau. But when two cellar-dwellers do battle, it can be hard to figure how they stand against each other. In this case, it’s not an easy call. It seems like the Jets have better talent on the offensive side of the ball. Not that it has amounted to a whole lot, but RB Michael Carter, along with receivers like Corey Davis Jamison Crowder, Keelan Cole, Elijah Moore, and Ty Johnson, have at least had moments of good production this season. Houston has Brandin Cooks, and from what we’ve seen this season, that’s not who you want as your top dog. The Texans’ top backs, Phillip Lindsay and David Johnson have yardage totals that make backups on most teams laugh. The situation is quite dire.

There is always a flip side to the coin, and in this case, it’s the other side of the ball. The Jets are giving up a party to everyone. Receivers, backs, tight ends, and quarterbacks all can go to town against this group. They’ve given up the most points and the most yardage. They’re not safe against anyone. Houston, meanwhile, despite a shockingly-low amount of support from the other side of the ball, has seen some good signs on defense. Their rushing defense can’t really be lauded, and it is something the Jets could pounce on in this spot. But with an improving pass-rush and a pass defense that has been respectable this season, at least they bring something to the table on “D,” which is more than you can say about their opponent.

Let’s look at it from an ATS standpoint. The Jets are 2-8 in that regard, a shockingly-low amount of covers for a team where the book has to stretch it to make people want to take such a team. And still, weeks sail by without the Jets being able to deliver for their bettors. If looking for some silver lining, the Jets have had some close games. And like Houston, they also scored a big surprise win over the Titans this season. But two covers in 10 games is hard to sugar-coat. Meanwhile, the Texans might not be profitable in an ATS regard, but at 5-5, they have at least been respectable. With two spreads covered in their last three games, they’re at least in slightly better form than the Jets are—though that isn’t hard to do.

After falling majorly flat in his first week back after dealing with a hamstring injury, Houston QB Tyrod Taylor at least didn’t undermine the process last week. Still, with 107 yards through the air, they’re waiting for him to provide a little boost, though his two rushing TDs made it less of a rough day. The Jets, meanwhile, have a more-murky situation. It appears Zach Wilson should be ready, but they seem in no hurry to put him back in. Last week Joe Flacco went for 291 yards, throwing for two TDs, and giving the Jets some of the better QB play they’ve seen this season. Mike White is still there. It’s hard to determine where the Jets will turn, though it seems like Flacco might be the most reasonable choice.

The Value of Playmakers

Houston’s win over the Titans on Sunday was a byproduct of a mistake-prone Tennessee offense, along with a capitalizing Texans’ defense, including two picks from Desmond King among the four the Texans had. If looking for some pop from this Houston offense, it could be a long wait. We saw Rex Burkhead getting the bulk of carries last week, and his drawbacks as a lead back are numerous. You have a lead receiver in Cooks who might give you a decent game here and there, but he might also give you nothing. And sure, trading Mark Ingram has something to do with it, but to be entering week 12 with your leading rusher having 137 yards is pretty hard to stomach.

Then again, they are playing the Jets, a team whose defense has made some people wonder if a top college football offense could maybe succeed against this bunch. The secondary is made up of undrafted free agents and other discards from other teams, rendering their pass-defense a raging liability. If there is a spot where Taylor can connect with Cooks and his other rarely-surfacing weapons, this would seem to be it.

A bet on the Texans can only be made with so much of a clear head. We saw the Jets hold a recently-decent Miami Dolphins’ bunch to 24 points last week, suggesting they could hold the dysfunctional Houston offense to a reasonable amount. In a game with so little to choose from, maybe Houston’s win last week is the best thing to latch onto, as well as the confirmation we saw that their defense is heading in the right direction, with more general stoutness and playmaking lately. I’ll take a whirl on the Texans.

Loot’s Prediction to Cover the Point Spread: I’m betting on the Houston Texans minus 3 points. Bet your Week 12 NFL picks for FREE by scoring a 100% real cash bonus on your first deposit of $100 to $1000 at Betnow Sportsbook!