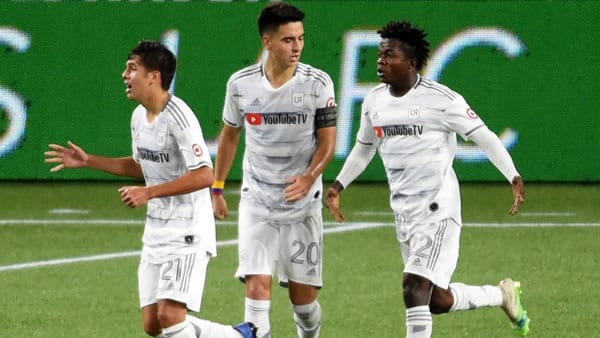 It’s been a rough 2020 for the Galaxy, but one thing that’s always made them shine during this season is the sight of their cross-town rivals. It’s the fourth meeting of El Trafico this season, and the Galaxy is desperately hoping that it can regain the form it showed during the last meeting, when it blitzed the Black and Gold and picked up an easy win. But after that game, the Galaxy followed up by drawing with San Jose and then proceeding to lose six in a row, which has their playoff hopes on life support.

LAFC has no such worries as far as the playoffs go, but if the Black and Gold can’t fix their form in a hurry, they’re not going to last very long when they get to the postseason. They took advantage of Portland’s inability to close out a match, but otherwise, LAFC really hasn’t been itself all season long. To be completely fair, few teams have had more issues with injuries and opt-outs than the Black and Gold, as Carlos Vela got hurt and Diego Rossi has spent the past two weeks in quarantine. But neither the standings nor the schedule care what LAFC has dealt with, and the reality is that they’ve got to get things sorted out if they’re going to get anything done in the postseason.

Bringing Jonathan dos Santos back might make a difference, but the reality is that the Galaxy have looked lost all season in 2020. Only Vancouver and San Jose have a worse goal difference than the Galaxy does in the Western Conference, and a large reason for that is that for the most part, their offense has looked completely lost. Over the past eight matches, the Galaxy have scored one goal or less on seven occasions, including being shut out four times.

If Diego Rossi is back on the pitch, LAFC becomes much more likely to get a result out of this match. Rossi and Brian Rodriguez were forced to quarantine after traveling to South America to help Uruguay, and without them, LAFC was forced to find scoring help from a few unlikely sources. Christian Torres provided the equalizer for the Black and Gold against Portland, which is the only goal that LAFC has scored in the run of play over its past two matches.

The main problem for LAFC has been the same as always: defense. Other than a win over a bad Vancouver side that’s been through the ringer, LAFC hasn’t managed to shut out anyone since the season opener against expansion side Miami. The Black and Gold has 40 goals to its name, but they’ve allowed the same 34 goals that the Galaxy has, which is the main reason why they’re sitting in fourth despite their scoring prowess. If LAFC is going to get back on track in time for the playoffs, it’s got to get better play from its back line.

When these teams meet, goals are almost sure to follow. LAFC has never shut out the Galaxy, and in four trips to Banc of California Stadium, the Galaxy have scored 11 goals. Because of that, I think the best bet on the board is to take the Galaxy to score at least twice. I know the Galaxy haven’t been playing all that well on offense, but this will be the worst defensive side they’ve faced other than Vancouver, and they’ve never shown an issue in putting goals home against this team. For +125, I’m happy to take a trend like that.

I’d also jump on the over. I can’t see either side stopping the other in this matchup, especially if Rossi is back on the pitch. LAFC is prone to defensive breakdowns, but so are the Galaxy. The Galaxy played a match that featured nine goals against Portland, and they’re perfectly capable of giving up two or three in the face of this attack. If you want to go for a result, I think the best bet is to take a draw and both to score at +360.

Finally, I’d back more goals to happen in the second half of this game. In the past two meetings, the goals tended to come later, and as one side gets desperate, more goals are likely to come. For +150, I think there’s a lot of value here.

I just don’t have a great feeling about either team in this matchup, other than expecting a good amount of goals to find the mesh. I don’t like either team’s defense, and I don’t know just how well both teams will mesh with their recent personnel changes from players coming back.