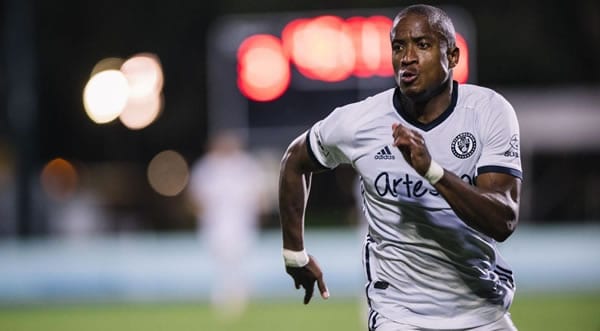 The Timbers defeated Philadelphia 3-1 on May 25, 2019, at Talen Energy Stadium in Chester, Pa.

It’s semifinal time, and experience has been thrown out the window. Of the four remaining teams, Portland is the only one that has ever won an MLS trophy of any kind, having done so in 2015 when they won the MLS Cup. Every other team is trying to reach the CONCACAF Champions League for the first time in their history, which means that this is truly anyone’s tournament.

Philadelphia will be hoping that the past doesn’t matter, because the Union’s history against the Timbers is rather poor, to say the least. Over the past four meetings, Portland has won all of them and scored 11 goals in the process. But Philadelphia believes that it finally has a team that’s able to compete at the highest levels, which means taking out a team of Portland’s caliber. The Union hasn’t been the flashiest team in Orlando by any means, but Philadelphia has been effective and has played like a veteran group since the opening match. Can the Union get over the hurdle and get themselves into the final?

Sergio Santos has stepped up his game as we’ve moved into the knockout stages. After a quiet group stage, Santos has really come to life in the knockout rounds, and he’s helping Brendan Aaronson make the right decisions that open up defenses. Philadelphia has been an offensively challenged side in this tournament, but the Union do have plenty of talent on the attack, as shown in their match before the pause, a 3-3 draw with LAFC.

But the Union’s problem remains the back four, which has made for several nervous moments in defense. Fortunately, Philadelphia boasts the best goalkeeper in MLS in Andre Blake, who has put in several outstanding performances in this tournament and helped his team hang on to late leads against New York City and New England. Blake has been asked to do far too much, and at some point, that might end up backfiring if the Union can’t slow down their opponent.

The main thing the Timbers have got to stop doing is giving away penalties. Portland has conceded three of them in this tournament and nearly gave away a win in its round of 16 win over Cincinnati when keeper Steve Clark inexplicably misplayed a ball in the box and gave away a kick from the spot.

The good news is that the adversity the Timbers have faced gives them an edge over Philadelphia, which has been on a glide path to the semifinal. The Union have never trailed in this tournament, while Portland has had to fight through adversity by overcoming deficits against LAFC and New York City.

There’s also a sense of familiarity for the Timbers, who have played at this level before. Portland was the 2018 Western Conference champion and knows what it takes to win at this level. Diego Chara, Sebastian Blanco, and Diego Valeri have been here before and have looked sharp in this tournament. In the final 15 minutes, that could prove critical, especially as tired legs begin to take over.

Think low scoring. Philadelphia hasn’t given up more than one goal in five matches in this tournament, and of the six goals that Portland has conceded, only three have come during the run of play. In fact, both goals that the Timbers have given up during the knockout stage have been because they’ve conceded a penalty.

So that leads me to the under, as I expect these two sides to play a cagey match that takes a long time to open up. Given that you’re getting plus money on the under, I think this makes for a solid bet. However, if you want to get really aggressive, I’d recommend playing both teams to score and the match to end in a draw at +320. These defenses are playing very well right now, and I think Philadelphia is a much better team than the side that Portland has handled with ease over the past four years.

Given how many times Portland has given away a penalty in this tournament and how tight the officials have been calling matches, I think there’s also very high value in taking Philadelphia to score from the penalty spot. If you can find it, you can get it for +450, a very solid payout on a flier.

Finally, if you’re looking for a player to score, I’d take a look at Diego Valeri. The veteran stepped up big off the bench in the last game, and if he starts, he’s a solid threat to score at +188.

Both teams looked very good in their last match but did so against defenses that have been less than stellar in this competition. Portland hasn’t seen a defense as good as Philadelphia’s has looked, and the Timbers have been playing on another level defensively when they’re not giving away penalties.

I think these sides look to be about even, and I’m going to pick this match to finish even. Give me a 1-1 correct score pick at +625. Bet you soccer picks for free this week by depositing anywhere from $100 to $300 and receiving a 100% REAL CASH bonus at MyBookie Sportsbook. (See our MyBookie Review). New clients must sign up this special link and use bonus code PREDICT100.