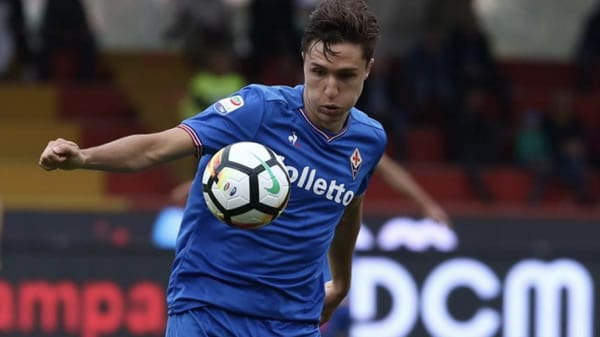 Italy defeated the Netherlands 1-0 on September 7 at Johan Cruyff Arena in Amsterdam.

First place in the group is on the line in Italy, which is very much on the front foot as far as winning the group and reaching the Nations League Finals in League A. All the Italians have to do to claim first place is win their remaining two home games, a relatively reasonable ask given that the Azzurri are riding an 18-match unbeaten streak and haven’t lost a match of any kind on Italian soil since 2016.

The Netherlands still has a chance to take first from Italy if it can find a win here, but the Oranje are mainly just looking to find their footing under new coach Frank de Boer. The Dutch appeared to finally be on the upswing again when they qualified for Euro 2020 after botching the previous two major international tournaments, but since coach Ronald Koeman bailed on them to take over Barcelona, the Netherlands has appeared lost at sea. In two matches under de Boer, the Oranje have not found the goal, and they enter this match sitting on 299 minutes of action without hitting the back of the net.

MLS fans might recognize the name of Frank de Boer as he began 2020 as Atlanta United’s man in charge. While this might be the ultimate example of falling upward after he left the Five Stripes, it’s also true that Atlanta was the only team at the MLS Florida tournament to fail to find the net, and the scoring issues have followed de Boer across the ocean to Holland. Somehow, de Boer’s teams have now failed to put the ball in the net in five consecutive matches, which is just remarkable.

To be completely fair, part of it was beyond his control, as Steven Bergwijn, the most recent man to score for the Dutch — four matches ago — pulled out of this month’s games with an injury. At the same time, top scorer Memphis Depay was suspended for the scoreless draw with Bosnia. But de Boer did have Depay on the field for a match last week against Mexico, and it didn’t help: the Oranje managed just three shots on target against the Mexicans in the shutout loss.

Beyond those two, there’s just not a lot of attacking prowess as the Dutch continue to try to move past their golden generation of Arjen Robben, Robin van Persie, and Wesley Sneijder. Ryan Babel has experience finding the net, but he’s now 33 and doesn’t have much high-quality soccer left in him. The only real scorer on this roster besides Depay is Georginio Wijnaldum, and he’s a midfielder, not a finisher. If de Boer can’t figure out how to get some space for Depay against this Italian defense, it’ll be another shutout for the Oranje.

Italy’s always been a strong defensive side, but since coming back from COVID, the Azzurri have taken that up to eleven. Italy had to settle for a 1-1 draw with Bosnia in its Nations League opener because it allowed a goal to Edin Dzeko 57 minutes in, but that’s the only goal that the Italians have given up in four matches behind mostly closed doors (Poland did allow 9,000 fans to attend Sunday’s contest). What they’re doing is obviously working, because any time that the opposing side has Robert Lewandowski and ends up with zero goals, you’re doing something right.

What’s hurt Italy is that there’s been an outbreak among Serie A clubs, which has prevented Roberto Mancini from selecting everyone that he would like. Players from Napoli and Genoa have been off-limits for this month, which means that Lorenzo Insigne won’t be available to help the attack. Instead, the job falls to Ciro Immobile and Federico Chiesa, the latter of whom found the net for the first time in an Italian shirt in a rout of Moldova. Italy might not have the attack needed to be a top side at this moment, but as long as the defense has Giorgio Chiellini at the back, goals will be hard to come by against Italy.

The Netherlands isn’t scoring, and Italy isn’t conceding, so I think there’s outstanding value in taking the Italians to get the shutout at +140. I’m not sure Italy can find the goal they need to actually get the win, but I think there’s an excellent chance that the Italians can keep a check on Depay and prevent the rest of the sputtering Dutch offense from finding the net. If I can get plus money for that, I’m all over it.

But if you think Italy can find the net, I’d back Italy to win and under 2.5 goals at +300. I don’t see any way that Italy’s offense gets going to the tune of three goals, so I wouldn’t waste my time with taking Italy to win to nil at +200. If Italy wins this match, it’s going to be because they kept the Oranje from finding the net and managed to get one of their own.

Finally, I’d go even lower than the standard total on this match. I’d take under 1.5 goals in the game for +210. I cannot see a lot of scoring in this match from either side, and this seems to be the safest way to play that possibility and get plus money. If you want to go safer, you can take a “No” on both teams to score at -125, which I think has a great chance to cash.

Here are the scores of Frank de Boer’s past five matches in charge of Atlanta and the Netherlands: 1-0, 1-0, 1-0, 1-0 and 0-0. As maligned as de Boer’s teams’ attacks are, they can at least play defense, making a low-scoring match almost a sure thing. The only question in my mind is whether one of these teams can find a breakthrough and prevent a scoreless draw.

I think Italy can do just enough to find a breakthrough, just like they did last month against the Dutch. I’m going to back De Boer to take yet another 1-0 loss here against the Italians, with a payout of +600. Check this out! The best sportsbook bonus on the web: Deposit only $25 and get a FREE $50 bet! You must sign up at Intertops through this link and use bonus code ROOKIE200