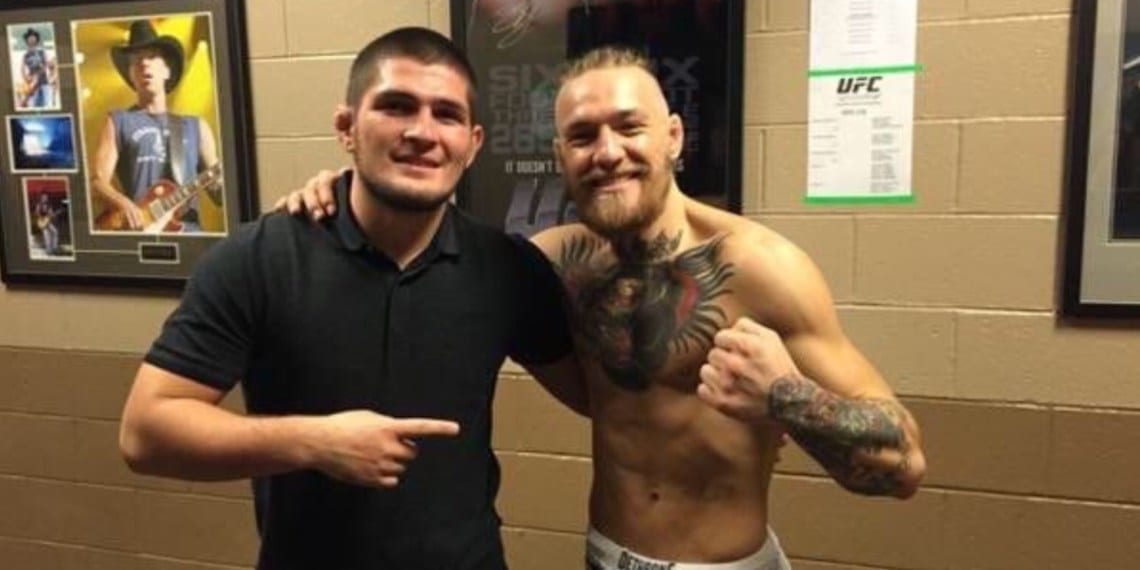 Fight Analysis:
Headlining UFC 229 will be the Fight of the Year in MMA, with the sport’s biggest star in Conor McGregor returning to take on the sport’s most dominant force in UFC Lightweight Champion Khabib Nurmagomedov. The Irish superstar looks to regain his old title against the new king of the division. It is McGregor’s first fight in an octagon since 2016 and he’s doing it against an unbeaten and thoroughly-dominant force in Khabib Nurmagomedov. Who is going to come out on top in this one?

ADDING A BIG BONUS WILL INCREASE THE PAYOUT OF THIS PLAY

Khabib Nurmagomedov, 26-0 (8 KOs, 8 Subs), (-160) vs. Conor McGregor, 21-3 (18 KOs, 1 Subs), (+130)
Khabib Nurmagomedov defends his UFC Lightweight Championship against former champion and MMA superstar Conor McGregor on October 6. It is the main event of UFC 229 and a massive event in MMA. Khabib, 29, is unbeaten in a 26-fight career and looks to add a real pillar to his resume with a win over McGregor. To do so, he will have to repel a 30-year old McGregor who is eager to get back to the business of winning and being a multi-million dollar making powerhouse. This is really a compelling matchup, which should produce a fight worthy of all the hype.

The stakes are as high as it gets. A win of this magnitude coming off a layoff would cement McGregor’s greatness beyond dispute. Khabib has been so dominant since entering the UFC and so far beyond his peers. For Conor to be the first to derail a juggernaut like that would put him in rarified air. For Khabib, this is a fight that could put him another realm. While respected and lauded in MMA circles, this is the fight that could transcend his career and put him in a different dimension.

McGregor hasn’t won in almost two years, with a KO loss in a boxing ring to Floyd Mayweather his only action since beating Eddie Alvarez for this same belt in 2016. He is a rare force in that the over-the-top hype surrounding him is actually commensurate with his resume. With wins over Dustin Poirier, Max Holloway, Chad Mendes, Jose Aldo, Nate Diaz, and Eddie Alvarez, along with titles in two divisions, his credentials are above reproach. But he also needs to win to justify his mega-superstar status and it’s been a while since we’ve seen the notorious one in the winner’s circle.

There is no doubting that McGregor has the element of magic that you only find with the best. He put a lot of people to sleep on his rise to the top, culminating in a stunning 13-second KO of a Hall of Famer in Jose Aldo for the Featherweight Title. He also used his violent hands to win his second belt over Alvarez in his last fight. But this stands to be his toughest challenge, against an unbeaten and dominant champion who is in his prime. And that’s a lot to ask a fighter coming off a layoff who is now on the wrong side of 30. In addition, with all the money McGregor pocketed against Mayweather and the fact that he hasn’t appeared to be reserved in enjoying the spoils of his new expansive wealth, can we still expect a hungry McGregor to surface?

Khabib isn’t merely unbeaten, but he’s really approaching legend status. The stories are endless about his prowess in training camps. And his octagon appearances have followed suit. He wins so big, it’s hard to believe. Other than Michael Johnson stunning him in 2016, no opponent has had so much as a glimpse of anything resembling victory. His last fight, his tenth appearance in the UFC, he vanquished Al Laquinta for the 155-pound belt via dominant 5-round decision win. It wasn’t the big win over Tony Ferguson he wanted, with Ferguson injured just prior, but his supremacy at 155 pounds is without debate.

A supreme wrestler, Khabib really just throws guys around like rag dolls. And he’s not just doing this to anybody. We’re talking about guys like Rafael dos Anjos and Edson Barboza. Opponents soon feel like they’re drowning, overcome and left helpless, as their life is slowly sucked dry by the swarming Khabib. Fighter literally look scared and without the ability to correct their impossible situation when Khabib is on a roll and throwing guys around. And making it come together even more is the fact that he appears to have solved his weight-making issue, having made 155 pounds easily in his last two fights.

In perhaps an over-simplified breakdown, we have a dominant wrestler in Khabib against a striker-extraordinaire in McGregor. Both are the best at what they do. Conor has the magic-touch in his hands, able to render great fighters unconscious with a single swat. Meanwhile, Khabib has run absolutely roughshod against every fighter he has faced. Despite his overall star-power paling to Conor’s, he has been installed as a decent-sized favorite for this fight.

It’s important to acknowledge what McGregor does well. And it’s not just fight-ending power. He puts a certain amount of psychological pressure on opponents. Fighters realize McGregor just isn’t any other fighter. Fighters are often in a different mindset when fighting McGregor. It feels different. The magnitude of the fight is different. The tone is ramped up. And Khabib has taken on some great fighters, but he has never beaten anyone on Conor’s level. He has tried to fight the best and had fights cancelled against top guys, but at the end of the day, he’s beaten good fighters without really beating a star yet. In other words, we know Conor belongs at this mega-level. How sure are we about Khabib?

Khabib has a higher level of reliability in his stamina. We have seen Conor get tired in fights where his power doesn’t quickly decide fights. And stamina isn’t going to improve when having to hold off the rampaging Khabib. Both men have reasonable paths to victory and it doesn’t have the look of a fight going the distance. What Michael Johnson did against Khabib offers hope for potential McGregor backers, as Conor is infinitely more-dangerous than Johnson. But if Khabib gets the kind of fight he wants, it could look like a man fighting a child. And Conor has been overwhelmed on the ground more than Khabib has been exploited standing up. If guys like Chad Mendes and Nate Diaz were able to manhandle McGregor at times, what will Khabib be able to do? McGregor could cause a lot of issues for Khabib with his striking, speed, trickiness, and overall guile. I just see Khabib’s window for success being so much larger. I’m taking Khabib Nurmagomedov.

My Pick to Win: I’m betting on Khabib Nurmagomedov at -148. McGregor could conceivably set Khabib up and take him out. But Khabib’s package of strength, off-the-charts wrestling, and overall dominance and reliability make him a solid proposition at this price.