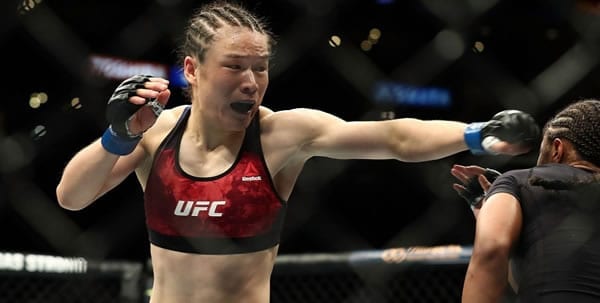 UFC 248 from Las Vegas features two title bouts in what figures to be an entertaining and high-stakes card from T-Mobile Arena. In the main event, the 185-pound title is up for grabs with one of the brightest rising stars in the sport in undefeated Israel Adesanya defending his UFC Middleweight Championship against distinguished contender Yoel Romero. But the title-fight action doesn’t stop there, as China’s Zhang Weili defends her women’s 115-pound strap against ex-champ Joanna Jedrzejczyk. Let’s break it all down!

Israel Adesanya defends his UFC Middleweight Championship against well-known top contender Yoel Romero in the UFC 248 main event. Adesanya went into Melbourne in October and scored a huge 2nd-round KO over champion Robert Whittaker to win the full title. He is a superstar in the making, an unbeaten and dynamic champion with an extreme and unique skill-set. In Romero, he is facing one of the more-dangerous fighters at 185 pounds, a decorated wrestler with great athleticism—a man capable of beating anybody on the right night.

Some might take exception with Romero as an opponent. At 42 and with three losses in his last four fights, including two straight, he doesn’t fulfill what you’d expect from a typical title-challenger. But the closeness of his fights and who he has been fighting, in addition to his sheer talent and ability, makes it hard to say he’s an easy challenge. He is an explosive athlete, perhaps the most decorated wrestler in MMA, and a freakish package of overall menace.

Though he is a champion, people are only now starting to come around on how great Adesanya really is. He had a boxing/kickboxing career in his background, where he won 80 of 86 fights. He has thrived since moving into the UFC, but most startling is how he maintained that same level of excellence and dominance when moving to the top levels of 185 pounds. Wins over Kelvin Gastelum and Whittaker and the dominant nature in which he prevailed speaks for itself.

The champion known as “The Last Stylebender” is a master of striking, galvanized by his past involvement in boxing and kickboxing. The way he sets guys up is amazing. He strings together combos seamlessly, with unique strikes that come from nowhere. There is striking, and then there’s the kind of intricate and creative striking that Adesanya brings to the table. The way he employs advanced use of angles while being so fluid is eye-popping. He switches from orthodox to southpaw seamlessly and sets traps and can lash out with startling velocity.

A few things are telling to me when assessing Romero’s chances. One is that Adesanya wanted this fight, and to call out a monster like Romero shows what kind of mentality he has. Romero has never been able to thrive clearly at the highest levels of the division. And while this type of arithmetic doesn’t always work, Romero losing twice to Whittaker, whereas Adesanya easily beat the same man might actually serve as a barometer of where each man stands. Romero is dangerous and, at an underdog price, can always be justified as being worth taking a whirl. But with Adesanya still being somewhat of a low-profile champion, I think the price is right here.

My Pick to Win: I’m betting on Israel Adesanya at -235 betting odds. He’s the future, and this is Romero’s last hurrah, a title shot that he probably didn’t deserve. And at 42 and having failed in multiple opportunities, the prospects of him now ascending to the top would seem a tad more unlikely than what the odds suggest.

Bet on the winner, distance, or TKO CLICK HERE

In the co-main event, UFC Strawweight Champion Zhang Weili defends her title against former division ruler Joanna Jedrzejczyk. In August, Weili stunned the MMA world by registering a 42-second KO win over champion Jessica Andrade to annex the title belt, and she now sets out to make her first defense. But in facing “Joanna Champion,” Weili will be tangling with the woman who first brought distinction to this weight class, winning 6 title fights from 2014-17. Is she still up to championship form or will we see Weili show the same dominant form she showed in winning the title?

This fight has a young vs. old guard feel to it. Though only two years younger than Joanna at 30, there is a sense that Weili is what’s today, while Jedzrejczyk might be yesterday’s news. Joanna was cruising along, when the wheels came off a bit, leading to a 2-3 run in her last five fights. To write her off would be a miscalculation, but after over 70 fights in kickboxing and muay-Thai, followed by a demanding MMA career, it’s fair to ask if she is still near her peak. To her credit, she enters this fight on a winning note, coming off a decision win over Michelle Waterson in October. And with just five stoppages in her 19 MMA fights, she isn’t really the type of fighter who can thrive in depreciated form. She really needs that razor’s edge.

Weili winning the belt was a big thing for the UFC, further opening up far east markets and bringing a whole different part of the world into the sport. In her first really big fight, she showed she has the championship makeup with such a dominant showing over a feared champion in Andrade. She will definitely be seeing some things for the first time with the over-the-top gamesmanship of Joanna, who really likes to mix it up with her customary pre-fight vitriol.

With 17 stoppages in her 20 MMA victories, Weili is very dangerous. She has never seen the fourth or fifth rounds, an area where Joanna is very accustomed. In a drag-out fight, one can imagine Joanna doggedly hanging in there in an effort to pull out the decision win. But I feel her window may have passed, and her inability to finish opponents will cost her at this level moving forward. Granted, Weili’s body of work at a high level is pretty shallow—basically a 42-second window where she thrived. And Joanna had a long title reign where she shined and is maybe the more-proven commodity. I just see one fighter on the way down, with another one on the way up, and that’s a hard to equation to buck for Joanna. I’ll take Weili in this one.

My Pick to Win: I’m betting on Zhang Weili at -145 betting odds. She’s the fresher and more-dangerous fighter, which should be enough to usurp Joanna’s intensity and experience. With no stoppage wins since 2015, Joanna’s routes to the winner’s circle are more limited, and I see another big performance from Weili in UFC 248. Bet your UFC 248 picks for FREE by taking advantage of a 100% REAL CASH bonus offer where you can deposit $100 and get $100 free, deposit $200 and get $200 free or go for the biggest bang where you deposit $300 and get $300 added to your account. Find this huge offer at MyBookie. Must use this link to sign up and use promo code PREDICT100.