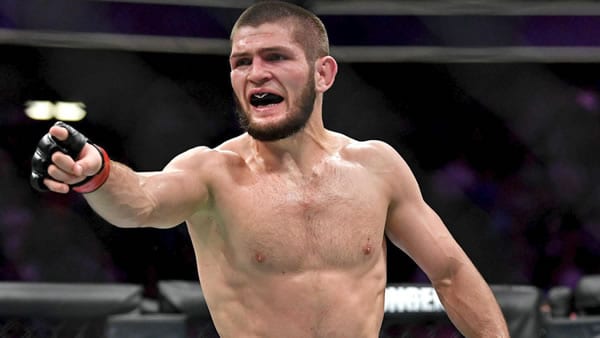 UFC 254 features the return of the man many feels is the best pound-for-pound MMA fighter in the world, as champion Khabib Nurmagomedov battles top contender Justin Gaethje for the UFC Lightweight Championship. It’s rare for a fighter to be undefeated over this many fights in MMA, but not only is Khabib unbeaten, but he’s rarely even been troubled on his route to the top. But in Gaethje, you have a feared fighter who has 19 KOs in his 22 wins, coming off a captivating demolition of Tony Ferguson, who many considered had the best chance of beating Khabib. It’s going to be an interesting night. Let’s see what we can come up with for the UFC 254 main event!

Khabib Nurmagomedov defends his UFC 155-pound title against top contender Justin Gaethje in the UFC 254 main event in Abu Dhabi. It has been over a year since Khabib last graced the octagon, submitting interim champ Dustin Poirier in the third round. Gaethje’s last performance is what landed him this shot, when he clinically battered and dissected the long-unbeaten Tony Ferguson in May, winning in the 5th round by TKO. Many would not have fancied Gaethje’s chances against the preeminent fighter in the sport before that fight. But it was so eye-opening that it has forced us to look at Gaethje more-closely.

Gaethje is an interesting guy with a career that has been atypical in many ways. He is a former All-American collegiate wrestler, which on paper, would seem like a good thing against the marauding Khabib. But you almost never see him wrestle, as he has become a fearsome striker. Fans of the sport might recall his championship run in the World Series of Fighting, where he had a handful of memorable slugfests. But that willingness to slug almost cost him his career. Before long, he was sponging incalculable punishment, fighting on nearly even terms with less-talented fighters. But he was still unbeaten when he came to the UFC, where his reckless abandon finally caught up to him, as he was stopped by Eddie Alvarez and Khabib’s last victim, the aforementioned Poirier.

Knowing he needed a change, we began to see a more measured and calculated Gaethje, allowing his vast talents to rise to the top. Gone was the “damn the torpedoes” mentality. He started moving. He wasn’t pouring it all out there with no regard for personal safety. And as a result, we saw him racking up wins, and after beating James Vick, Edson Barboza, and Donald Cerrone, all by KO, he kept it going in what might have been the performance of the year against Ferguson in May.

Gaethje is certainly a threat to knock the block off of any 155-pounder on earth. And his wrestling might not make him a threat to throw Khabib around, but it might give him some answers defensively. You also wonder if there are any other elements that could aid Gaethje in this fight that are more off-the-grid. The Abu Dhabi location is right up the alley of the Dagestani-based Khabib, but Gaethje is more-accustomed to the new setting under covid, having already fought a huge fight amidst these new conditions. And while Khabib and what he does well is known by every lightweight on earth, Gaethje is relatively coming from nowhere and could catch Khabib by surprise. Gaethje is more recently active, with Khabib having fought just twice since April 2018. Up until a few months ago, Khabib never seriously entertained fighting Gaethje before. And not to in any way trivialize losing his father to covid, but one wonders how that might affect Khabib’s training.

Nevertheless, Khabib didn’t come out of Dagestan to become MMA’s most-dominant champion by not overcoming things before. One thing his backers hope he continues to overcome is his weight-making problems, and you wonder if anything in his life could make 155 really tough to make come fight-night. Seeing how crisp Gaethje looked in his last fight, it’s worth asking if the recent light fight schedule will hurt Khabib, who has fought an average of once a year since 2013.

Still, until shown otherwise, we’re talking about the most dominant champion perhaps ever in Khabib. His championship record is a bit short, with this being his third defense, but he has still managed to dominate a steady roster of standout 155-pounders. And he doesn’t just win, he completely demoralizes opponents. You see expressions on the faces of his opponents that you never see in an octagon—just complete resignation and a look that says, “get me out of here!”

With ungodly physical strength and wrestling abilities, Khabib’s techniques have utterly and completely taken over fights. You see Conor McGregor talking before the fight, then contrast it to the guy being buried by Khabib’s wrestling, and it’s a tale of two stories indeed. Opponents have all these ideas of what they’re going to do. And a lot of times, it makes sense and stands to reason that they could make it work. Then the fight starts, and before long, the opponent is getting absolutely nowhere, having the life squeezed out of him, getting battered, and looking like a completely beaten man. This sequence has played out time and again.

It’s a tough proposition. Part of me doesn’t want to be on the wrong side of history and look back at Khabib’s run of greatness and recall all the times I was wrong going against him. Another part of me thinks Gaethje looked like such a monster in his last fight that getting +240 on him is a real bonanza. I just can’t bank on a win over Khabib based on a win over what was a hollowed-out and flat Ferguson. While he has some definite underdog appeal, I see Khabib getting it done once again.

My Pick to Win: I’m betting on Khabib Nurmagomedov at -310 betting odds. He knows how to prevail when the stakes are high, While Gaethje’s more-methodical approach could keep him out of trouble, there has been a lot of fighters who tried to be careful too, and it got them nowhere. Khabib’s wrestling genius will surface regardless. Bet your Khabib vs. Gaethje pick FOR FREE by taking advantage of a 100% real cash bonus on your first deposit of $100 to $1000 at Betnow Sportsbook! Example: Register for an account, deposit $500 and they’ll add an extra $500 to your wagering account balance!