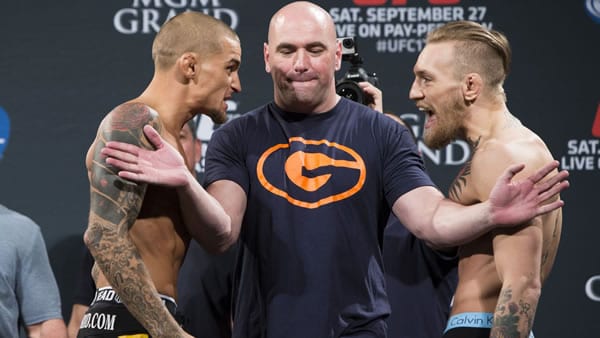 The UFC 264 main event features a rubber match between lightweights Dustin Poirier and Conor McGregor. In 2014, it was McGregor who prevailed by first-round KO. But in January of this year, it was Poirier who was able to exact revenge via second-round TKO. Who can win the rubber match? Will Poirier continue what he started in January, or can McGregor turn it around and remind people who he is? Let’s break it down!

Dustin Poirier, 27-6 (13 KOs. 7 Submissions), (-110) vs. Conor McGregor, 22-5 (19 KOs, 1 Submission), (-110)
Dustin Poirier and Conor McGregor tangle in a rubber match in the UFC 264 main event. This fight will have big ramifications at 155 pounds, a division that is swelling in talent once again. That means the winner of this fight will have a big leg up, with opportunities for titles so few in this sport. After losing to Poirier in January by TKO, some might wonder why a rematch even needs to happen. But it’s never a bad idea for a rubber match when both fighters each hold a KO win over the other.

Their January rematch was very interesting. The first round featured a give-and-take striking battle with both men having their moments. McGregor was acquitting himself well and doing some damage, though he was getting soundly out-jabbed by Poirier, who was also zipping in some leg kicks that appeared to take something out of McGregor. Still, with some punches, elbows, and even some shoulder strikes, McGregor was doing OK.

The second round began with McGregor finding a home for some strikes. He even appeared to buckle Poirier briefly. He was very active and looked pretty good, showing some growing versatility in his striking with some kicks. But the leg-kicking prowess of Poirier appeared to be resounding, and as a result, an exchange later in the round saw McGregor looking a little worse for wear, and he eventually succumbed to Poirier’s strikes.

Bet on the fight winner, distance or even if by TKO at BetOnline!

It’s long past time to start asking the hard questions about McGregor. While Poirier is a fighter who is easier to assess, McGregor’s case becomes far trickier. We’re talking about a two-division champion here, a fighter who may have achieved higher levels of stardom than any MMA fighter in history. You can’t really say much about his accomplishments or his resume. Of all the people in the world trying to do MMA, how many of them are going to reach the heights McGregor did? That counts for something. And the fact that he really needs this one to remain a relevant big-fight participant only enhances his value. You can’t count a guy like this out when his back is against the wall like this.

The other side of the coin, however, is damning. Since beating Eddie Alvarez nearly five years ago, he has fought three times, winning once. And that came against Donald Cerrone, a fighter who needs a telescope to see his prime. Throw in a TKO loss in boxing to Mayweather, and success has been elusive in recent years. And those were his prime years. By the time this fight occurs, he will be up against his 33rd birthday, having tasted victory just once in almost five years with several defeats—all by stoppage.

It seemed at some point, McGregor was more interested in being a star than an MMA champion. And while that reaped enormous financial rewards, it stunted McGregor’s growth. Whereas he thrived in a lightweight division when it was guys like Eddie Alvarez and Rafael dos Anjos ruling the roost, that success didn’t translate when it was monsters like Khabib and Poirier running the show. You simply can’t moonlight in this sport. It’s a young sport that progresses at a rate that surpasses other sports. Maybe a guy like Mayweather can pull this off in boxing, but in a sport where what worked seven years ago stopped working so well, it comes at a serious cost.

With Poirier, also 32, you’re dealing with a committed MMA fighter. In the time where McGregor has won just one fight, Poirier gained ground and then some, honing his craft against the best in the business and becoming the best lightweight in the world if not for the now-retired Khabib Nurmagomedov. Whereas McGregor’s game stagnated and became outdated, Poirier kept adding new wrinkles to become one of the more versatile fighters in the division. He might not have the highlight reel McGregor has, but he has more routes to victory, and that’s far more valuable.

This isn’t to discount McGregor’s chances summarily. He is becoming more active. He’s in training acting like a fighter is supposed to act. And he’s been at it for a couple of years. In his first fight against Poirier, he was right there. It was to the point where a little more offensive continuity, a shot here, a missed shot there, and we could have been looking at a different fight. Conor’s strikes, the ones that stopped Poirier in 2014, still trouble the Louisiana-based standout. And when a fighter who was good enough to do what McGregor did has his back against the wall as he does now, you can’t sell him short.

Be that as it may, if I were inclined to forecast that McGregor can do something he hasn’t done in years and beat a top UFC fighter, I’d like to be paid properly for being correct. In other words, a -110 quote isn’t all-that-close to being a righteous number on the Irish superstar. Not against a guy who showed that when he starts zeroing in, McGregor really can’t stand up to it. In a pick that’s made with a due amount of trepidation, I’m going with Poirier.

I’m betting on Dustin Poirier at -110 betting odds. The value is pretty good for a fighter who already beat McGregor this year by 2nd-round KO. McGregor can still hurt Poirier, but at this point, it appears that it will take a lot less to make McGregor fold than it will Poirier. Bet the fight LIVE in-progress at a sportsbook where credit cards work for deposits, where you’ll receive a generous 50% signup bonus AND rebates on ALL your bets; win or lose! –> Bovada Sportsbook!