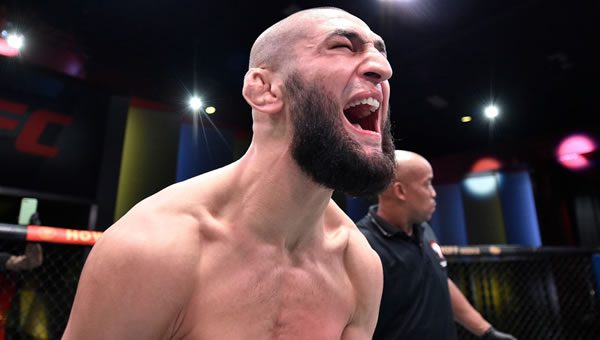 UFC 279 on September 10 in Las Vegas showcases a tip-top welterweight battle, featuring one of the hottest properties in the sport in unbeaten 170-pound contender Khamzat Chimaev, as he takes on a longtime contender and fan-favorite Nate Diaz. It’s the age-old battle of youth vs. experience. Nine years Diaz’ junior at 28, Chimaev is experiencing a fast rise to the top of the welterweight division. Having just joined the organization in July 2020, Chimaev has already established himself as perhaps the next big thing at 170 pounds. But Diaz might be a tougher gatekeeper than some are predicting, bringing into this fight a wealth of know-how and experience, in addition to being a fighter who has pulled off the improbable before in his career.

Khamzat Chimaev, 11-0 (6 KOs, 4 Submissions), (-1200) vs. Nate Diaz, 20-13 (5 KOs, 11 Submissions), (+700)
Welterweights Khamzat Chimaev and Nate Diaz battle it out in the 5-round welterweight main event in UFC 279. A lot is riding on the result of this fight. Can Khamzat take the next step and continue his run as one of the top young contenders in the sport? Or can Diaz breathe some life back into his career after a few straight losses? It’s almost like a battle between fighters from different eras, with most of Chimaev’s best work coming after Diaz went into dormancy. And all things considered, youth usually wins out in cases like this. Can Diaz score the upset?

Diaz has shown before that some damning details that derail other people’s chances don’t affect him the same way. He’s a natural fighter with innate skills that come from a ton of experience. And even in his recent outings, which haven’t gone his way, he still shows flashes of being dangerous. Last year against newly crowned champ Leon Edwards, Diaz almost had him in the final round. He can still strike with the best of them, with stamina that allows him to remain dangerous late into five-round fights.

Still, it’s hard not to take note of some damning details concerning the viability of Diaz in 2022. That giant win against Conor McGregor was in March of 2016, over six years ago. A win over Anthony Pettis is his only win since that time. Meanwhile, Chimaev has been on the ascent, winning fights and building confidence and his credentials. And the notion that Diaz needs a win or will be forced to retire or fight in non-main event bouts could give way to extra urgency and desperation makes sense, but didn’t that also apply when he fell to Jorge Masvidal and Edwards?

Bet the fight distance, winner, TKO and more at Bovada!

I’d be hesitant to put Diaz’ hopes in the scrap heap. The image being constructed might be exaggerating the hopelessness he is in. You have a fighter with extreme stamina, natural boxing skills, and who is adept at slinking in submissions, having done it to a cast of top fighters. Chimaev looks like he’s the goods, but five UFC fights where the only real contender he fought was Gilbert Burns, leaves a somewhat inconclusive resumé. And Burns being the first one to take Chimaev the distance shows that his effectiveness might be waning at the highest levels. Whether Diaz still occupies that higher level, however, is a dicey proposition.

If one thing jumps out about this fight, it’s the odds. Rarely will you see a main event fetch a -1200 quote for the favorite. That would seem to be especially true with a fighter with the fan support of Diaz, which normally does not accompany betting value. Regardless if you feel that Chimaev is the best thing since sliced bread and that Diaz is spoiled goods, one can’t really justify Chimaev as having good value in this bout.

Again, current champion Edwards didn’t blow Diaz out of the octagon at all in their main event fight. Wouldn’t a spent force be shown the door by a championship-caliber fighter? Instead, Diaz was threatening to finish the fight in round five, with Edwards safely getting to the bell and winning a wide unanimous decision. But he didn’t really run over Nate. Combine that with the sudden end of Chimaev’s murderous performances as he rose in class to fight Burns, a fight a few people even think could have gone to the loser, and maybe one starts to look at this fight as less of an automatic romp for Chimaev.

By the same token, this doesn’t bode terribly well for Diaz, either. The youth and energy of Chimaev is one thing. But the kid is truly relaxed in the ring. He won’t be some tightly-wrapped fighter serving as a counterpoint to the loose, improvisational style of Diaz. He can flow, too, and with his combination of hard-to-stop wrestling and concussive striking, Diaz won’t be afforded much of a margin for error. And winning momentum has to count for something, and in that area, the edge goes all to Chimaev.

Still, there are enough questions about whether this fight has been portrayed accurately. No doubt—Chimaev is the favorite, and it should be a to a fairly-pronounced degree. But to accept a -1200 quote on Chimaev, you’d have to forecast that in 14 fights between the two, he would win 13. And even then, the edge is minimal. From a straight-up point of view, there’s no question who you should pick. But at +700 with a fighter who has won by submission as much as Diaz and who has been in against such better opposition, I think a pick on the extreme underdog can be justified.

My Pick to Win: I’m betting on Nate Diaz to win at +700 betting odds. Naturally, going against such a robust favorite isn’t the most comfortable feeling. Diaz could be finished, and Chimaev dominating would come as no surprise. But it’s not often that you get a combination of the skills and attributes Diaz possesses for a +700 price. Bet your UFC predictions for FREE by taking advantage of a 100% real cash bonus up to $500 when you use bonus code PREDICTEM at Betnow Sportsbook!