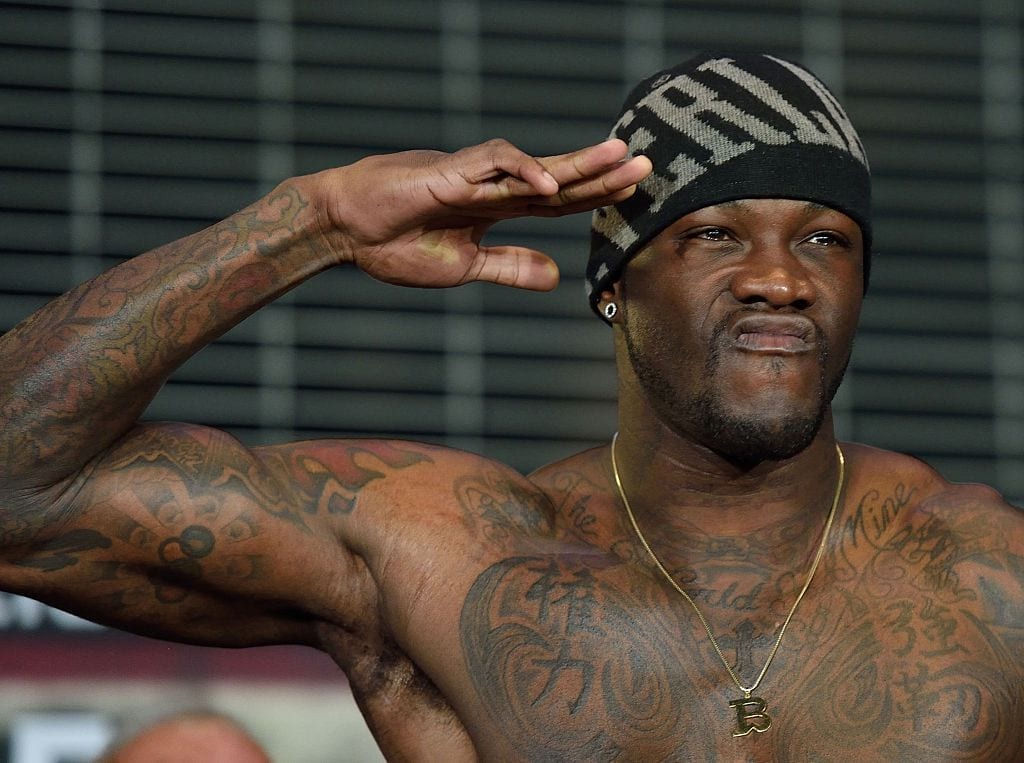 Deontay Wilder defends his WBC Heavyweight title against Dominic Breazeale on May 18 in Brooklyn. It’s not the fight everyone wanted—the rematch with Tyson Fury, but it’s an important fight Wilder must win to secure that future date, To get there, Wilder will have to thwart the challenge of a big, committed fighter in Breazeale, a once-beaten contender whose only other loss came in a previous title shot to Anthony Joshua. The odds are pretty big in Wilder’s favor, but not big enough to completely disregard the challenger’s chances. How does this one turn out?

Wilder is the more established product, naturally, with this being his tenth world title bout. His last fight was a signature moment in contemporary heavyweight history—a draw against Tyson Fury. A lot of people thought Fury deserved the decision, but Wilder showed a lot in turning around a fight that wasn’t going his way—first with a knockdown and then a big final round when he nearly took Fury’s head off, only to see Fury somehow rise and finish the fight. On the strength of his knockdowns, he got the draw.

The Fury fight, his first real test with the top-shelf of heavyweight boxing, was a two-headed coin. As I suspected, Wilder’s second-to-second boxing would pale in comparison to a more-natural fighter in Fury. And he was outweighed by nearly 50 pounds, coming in like a stick-figure at 6’7” and 209 pounds for that fight. But what we saw wasn’t just punching power, as his 39 KOs in 40 wins suggests. It was world-class power with the ability to deliver it in a pinch. And if not for the otherworldly recuperative powers of Fury, it would have been enough. The fight exposed some things about Wilder. He can be outboxed, but we already knew that. In showing he can make his punching power manifest when things aren’t going his way, he showed a certain air of quality that we weren’t sure he had in a career where everything had gone his way.

Wilder looks big, but he’s really just tall and long. In terms of weight, he is one of the smallest heavyweights to succeed at this high of a level for many decades. A late arrival to the sport of boxing, he lacks a certain level of naturalness and innateness you might see with more experienced fighters. What he lacks in those areas, he makes up for with pure punching power. It’s just natural. And when he connects, things happen. He’s hard to dissuade, and he can handle adversity. He’s a tough, strong guy who can bring down buildings with his best shots. At 33, he is in his prime now, and this is the time to build his legacy.

Also 33, the rise of Breazeale was less-conventional. A former college quarterback; he was also a late-bloomer in the sport. Like Wilder, he overcame his lack of experience and made the Olympic team, though he didn’t medal as Wilder did. A back-and-forth brawl with Amir Mansour in 2016 where he overcame a lot of hardship led to a 5th-round stoppage win, earning him a crack at Joshua. He fell in the 7th round. Three wins, all stoppages, have followed and have him in another big spot.

Breazeale is a big man, also 6’7” with a long reach and typically weighing in the 250-260 range. Coming from football, it took a lot of work for him to get into the Olympics and make himself a heavyweight contender. He is a fully-committed athlete with a lot of professionalism in his approach. And in the ring, he has shown a high level of drive and determination, along with some durability. Opponents aren’t going to have a walk in the park with this guy, no matter how good they are.

At the end of the day, however, Breazeale is struck with a stubborn case of mediocrity. Not everyone gets an equal share of talent. And while Breazeale makes up for it to some extent with his work-ethic, devotion, and determination, he’s simply not a tip-top athlete. There is no explosiveness to his boxing. He lacks the speed of hand and foot to trouble a boxer like Wilder, while also suffering from a power-deficit. He’s strong more than he has punching power. He can’t switch up gears, as he fights more or less at one speed.

Defensively is where the real concerns begin for the purposes of handicapping this fight. Again, kudos to Breazeale for getting this far. He just lacks the instincts of a fighter who was raised in the sport or one who was blessed from an athletic standpoint. With his size and the sheer availability to be hit with such a big target, Breazeale doesn’t have much defense outside of his offense and reacting to opposing offense on the fly. It’s not meant to impugn him as a fighter. But he’s taking on one of the top guys. And at that level, Breazeale is a Ford going against a Ferrari.

Breazeale put his whole being into this. After coming up short against Joshua, this is his last chance to make a statement at the top levels, and one should expect him to perform accordingly. I just think he is in over his head. He lacks the speed, power, and skills to threaten Wilder, while his ponderousness, lack of speed, and availability make him an easy target for the Howitzer shots that Wilder can deliver. I expect him to be tough and resolute, but I see Wilder showing him the exit and doing so before the tenth round. I’m taking Wilder to win while taking a position on the “under.”

I’m betting on Deontay Wilder to win at -900 and “under” 9.5 rounds at -290. While tough, strong, and big, Breazeale lacks the acumen on offense and defense to compete well at this level. A serviceable contender to be sure, Breazeale is not championship-material. And his deficits in boxing skill, power, and defense will be brought to light in graphic fashion against Wilder. Bet your Wilder/Breazeale pick for FREE by taking advantage of a huge deposit bonus at an online sportsbook where your credit card will work for deposits: MyBookie!